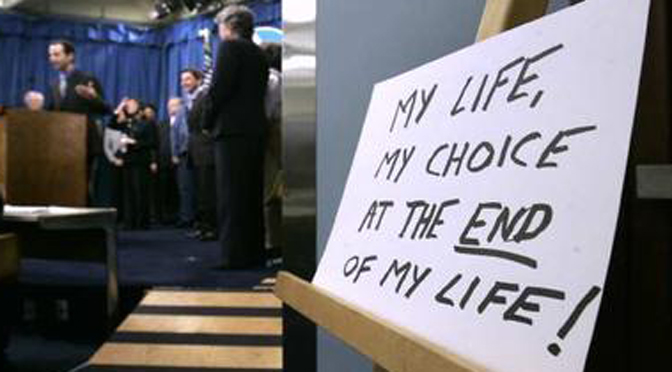 It wasn’t that long ago that assisted suicide was seen as a horrific crime; in the 1990s, Dr. Jack Kevorkian was given the nickname “Dr. Death” after it came to light that he euthanized people who wanted to die — possibly as many as 130. Kevorkian was arrested and found guilty of second-degree murder. While some supported him, Kevorkian was widely reviled across the country.

Fast forward 20 years, and assisted suicide seemed unstoppable. Brittany Maynard’s explosive presence at the forefront of the battle for its legalization made it appear only more so. The story of the beautiful young woman, who had her entire life in front of her, stricken with cancer and wanting the ability to die peacefully and without pain captivated the nation. On November 1, 2014, she took her own life — but not before publicly campaigning for the legalization of assisted suicide. Maynard was described as courageous and heroic for her decision and for her advocacy, as she partnered with Compassion & Choices, a “right to die” organization. It seemed that Maynard’s public plea for legalization would spur Americans to vote for the legalization of assisted suicide.

But three years after Maynard’s death, not much has changed. Two states have since legalized assisted suicide — California and Colorado — but it otherwise has remained illegal in most states. This year alone, assisted suicide measures have failed in 27 states, even in politically liberal ones like Hawaii, New York, and Rhode Island. So why, despite so much positive media coverage, is assisted suicide failing?

While Compassion & Choices is lobbying harder than ever to get assisted suicide legalized across the country, there has been tremendous pushback on multiple fronts — from the medical community, from people fighting terminal illnesses, and from disability self-advocates. The American Medical Association calls it “fundamentally incompatible with the physician’s role as healer” and warned that it poses “serious societal risks.” The American College of Physicians likewise released a position paper stating its opposition to assisted suicide, saying that it is “problematic given the nature of the patient-physician relationship, affects trust in the relationship and in the profession, and fundamentally alters the medical profession’s role in society.” The American Psychiatric Association also took a stand against assisted suicide, releasing a statement expressing its opposition to psychiatrists participating in euthanasia for people who are not terminally ill. The National MS Society also condemned assisted suicide, and called for it to be prevented by treating the underlying illness instead.

Individual doctors have likewise been speaking out, calling for assisted suicide to remain illegal. “Doctors know that if a terminal patient is hurting so badly that death becomes preferable, what that patient needs is better pain control, not help killing himself,” Dr. Grazie Pozo Christie recently wrote in an op-ed. “Doctors also know that most people who choose suicide do so because they are sad and lonely or don’t wish to be a burden on their families, not because of unbearable physical pain.” She also pointed out that it’s not uncommon for doctors to oppose assisted suicide, saying, “Some of the most ardent opponents of physician-prescribed suicide are doctors and nurses with plenty of experience accompanying patients through the shock of a terminal diagnosis and the struggle of the last months of life … Becoming an agent of your own patient’s death is directly at odds with a vocation designed to prolong and enhance lives.”

Dr. Joseph Marine, associate professor of medicine in the cardiology division at Johns Hopkins Hospital in Maryland, has also spoken out against assisted suicide. “We should never give up on our patients. We should always want to be there for them, we always want to advocate for them and help them, in every way that the medical system can possibly help them,” he said. “I can understand fear, but the way the doctor should respond to fear is not to encourage suicide. It’s to encourage the value of life, to encourage patients to be helped, to help them in any way that we can, in the ethics of our profession.”

Others, like Dr. Brian Callister, a professor and physician at the University of Nevada Medical School, have worked to expose the ethical problems that are endemic in states where assisted suicide is legal. Callister has spoken out about patients of his whose treatments are denied by insurance companies, only to be told that if they chose assisted suicide, that would be paid for, even though the patients had not expressed any wish to die. “Quite frankly, I was stunned,” Dr. Callister said. “This is something we didn’t talk about, we didn’t request, we didn’t ask for.” The idea isn’t entirely surprising, however, he explained.“It’s a lot cheaper to grab a couple drugs and kill you than it is to provide you life-sustaining therapy.” Multiple people have also come forward to talk about how they have experienced these abuses firsthand.

The medical establishment has published studies showing that most people requesting assisted suicide do so not because they are afraid of pain or the symptoms of their disease, but because they feel hopeless, are fighting depression, don’t have much support, or are afraid of being a burden on their families. This includes a recent study from the New England Journal of Medicine. When these issues are addressed, such as treating the person’s depression, then the request for assisted suicide is almost always withdrawn. One study, published in the British Medical Journal, found that one in four terminally ill patients in Oregon also had clinical depression, and that they weren’t being adequately protected by the Death with Dignity Act.

On top of all this, European countries have been failing to keep the abuses behind assisted suicide quiet. Perfectly healthy people are euthanized; children can be euthanized, also. People with mental illnesses are being euthanized against their will and without their consent. People are euthanized for being autistic, elderly, blind, transgender, for fighting addiction, and for being victims of sexual abuse.

Given all of this information, is it really surprising that assisted suicide is not as popular as Brittany Maynard hoped it would become? As emotional and convincing as her campaign for Compassion & Choices may have been, and despite the organization’s best efforts, the crushing weight of evidence is very much against the legalization of assisted suicide. And, for now, it appears that people are listening.