Testimony before a Pennsylvania House Health Committee hearing Tuesday is set to expose “government-sponsored, grotesque experimentation using aborted baby parts at the University of Pittsburgh,” according to Center of Medical Progress (CMP) founder David Daleiden, who plans to testify.

A video the pro-life organization released claims that the University of Pittsburgh is a “hub for some of the most barbaric experiments carried out on late-term aborted human infants… funded by the Unites States Government.”

“Publicly available information demonstrates that Pitt hosts some of the most barbaric experiments carried out on aborted human infants, including scalping 5-month-old aborted fetuses to stitch onto lab rats, exporting fetal kidneys across the country, and killing infants delivered alive for liver harvesting – funded by U.S. taxpayers via the National Institutes of Health, and in particular Dr. Anthony Fauci’s NIAID office,” CMP wrote in a press release.

The CMP video also claims the local Planned Parenthood of Western Pennsylvania in partnership with the University of Pittsburgh were operating an “illegal quid pro quo” over the use of and experimentation on aborted babies, some Daleiden claims are harvested alive.

“Local Planned Parenthood of Western Pennsylvania abortion providers supply the aborted fetuses, while Pitt sponsors the local Planned Parenthood’s operations, in what looks like an illegal Quid Pro Quo for fetal body parts, forbidden by 42 U.S. Code 289g-2 and 18 Pennsylvania Statutes 3216. Pennsylvania law also makes it a felony to experiment on a living fetus or to fail to provide immediate medical care to an infant born alive,” CMP stated in its release.

The two agencies have a long history of abortion cooperation. Since 2005, University of Pittsburgh’s UPMC Magee-Womens Hospital along with Planned Parenthood of Western Pennsylvania‘s abortion facility have teamed up to train abortionists to “improve procedural skills in ultrasonography, D&C and D&E” through the Ryan Residency Program, which began under the direction of Kenneth John Ryan, MD. The Program’s now deceased founder once called for private funds to experiment on aborted children.

The accusations of using live babies follow an op-ed Daleiden previously penned for the Washington Examiner. In that piece, according to a previous Live Action News report, Daleiden shared evidence that second-trimester babies were potentially delivered alive via induction abortion in order to get the most “complete” and “sterile” specimens for use in research at the taxpayer-funded University of Pittsburgh. The project was led by UPitt professor Dr. Jorg Gerlach whose studies were funded through the  National Institutes of Health.

But the use of procuring live preborn babies for experimentation dates back decades. Live Action News has previously described gruesome experiments performed on living abortion survivors, dating back to the 1930s. University of Pittsburgh anatomist Davenport Hooker conducted research on children who survived surgical abortion by hysterotomy and, in 1952, he assembled his footage into a silent educational film called “Early Human Fetal Activity.” The film showed the muscle activity of six fetuses ranging from 8 1/2 to 14 weeks. Video from that film can be viewed below.

(Warning: Images may be disturbing to some):

In that article, Live Action News cited a former nurse anesthetist, Wilhamine Dick, who testified before the Pennsylvania Abortion Law Commission that she witnessed the hospital shipping aborted and still living human fetuses to researchers for experimentation “packed on ice.” According to a March 15, 1972, article published by the Indiana Evening Gazette, the former nurse also told the commission, “It was repulsive to watch live fetuses being packed in ice while still moving and trying to breathe, then being rushed to some laboratory and hear the medical students later discuss the experience of examining the organs of a once live baby.” She added that she resigned because she was “no longer able to accept seeing tiny arms and legs considered routine specimens.”

In the video, CMP pointed to a horrific University of Pittsburgh study, which grafted the skin of an aborted baby onto rodents to study skin infections and the human immune system. Aborted babies were literally scalped for purposes of the study, Live Action News previously reported.

In a piece for the National Catholic Register, author Dr. Stacy Trasancos, Ph.D. described the study, writing, “[…]full-thickness fetal skin was taken from humans aborted at the gestational age of 18 to 20 weeks of pregnancy at the Magee-Women’s Hospital and the University of Pittsburgh Health Sciences Tissue Bank.” 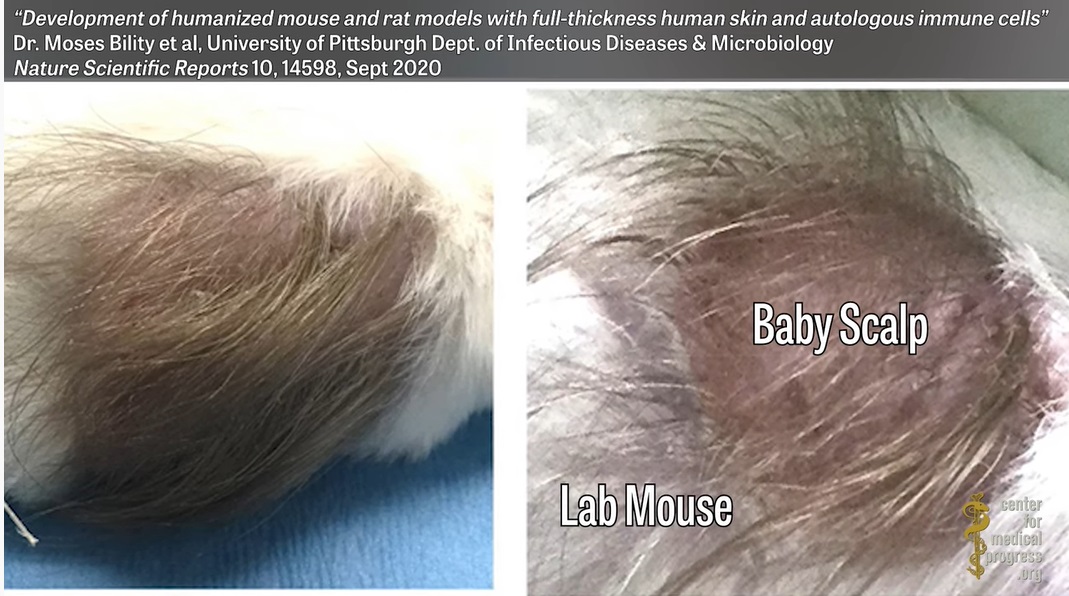 Full photo via the study in Nature

The video also points to a protocol developed by a UPitt scientist for “harvesting the precious most pristine livers from five month old aborted babies” to isolate “massive numbers of stem cells for experimental transplantation into adults.”

CMP claims there is proof that babies are aborted alive. The screenshot below taken from the video is said to show the premature baby “aborted alive via labor induction… as the baby is cut open to harvest the liver,” according to CMP. 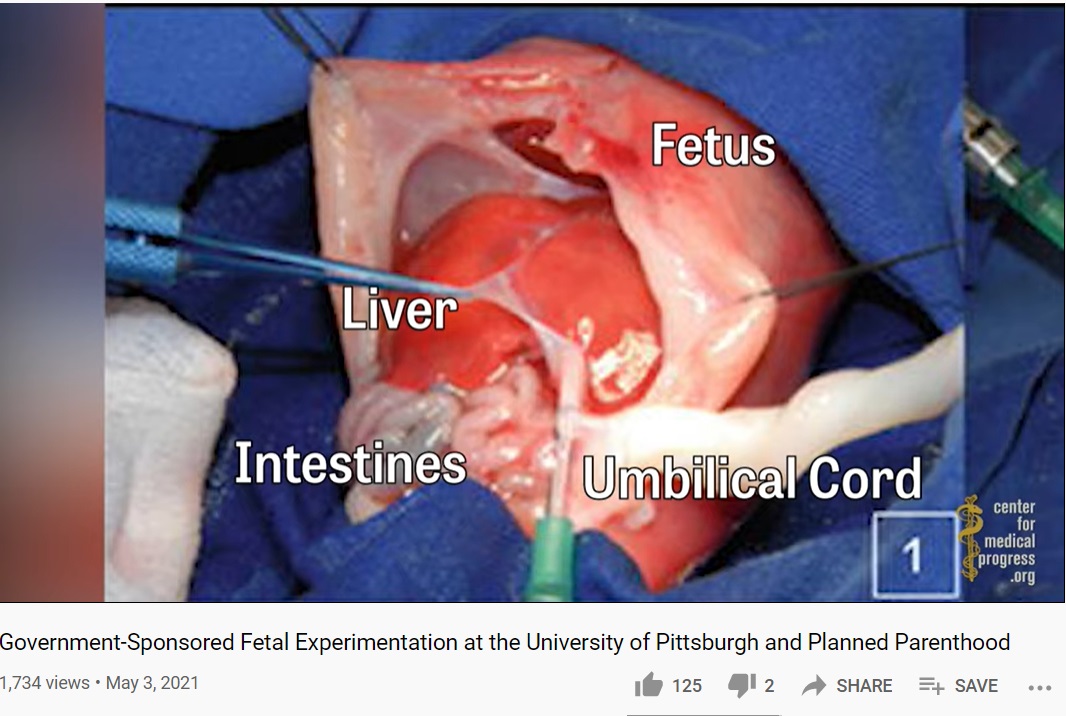 The video claims “the Pitt scientist who invented” the barbaric procedure is Dr. Jorg Gerlach, who allegedly received nearly $3 million from the NIH.

Staffers from Planned Parenthood Western Pennsylvania previously spoke to Daleiden during his undercover investigation about a “tissue bank at Pitt that we offer patients to donate to.” That tissue bank, later identified as GUDMAP, was recently exposed by a former worker at the University of Pittsburgh, who supervised projects to collect aborted baby body parts for research, according to a previous Live Action News report.

CMP’s recent video claims that taxpayer dollars made GUDMAP a “distribution hub for aborted fetal kidneys and other fetal body parts for NIH funded projects across the country,” and notes that GUDMAP has received a $1.4 million in funds from the NIH.

Daleiden told Live Action News that these kind of “barbaric practices” will only increase under the Biden/Harris administration, and the administration has confirmed this. In addition, with abortion advocates like Xavier Becerra controlling the purse strings of the HHS, taxpayer funding for this evil will also likely increase.

The Pennsylvania House Health Committee hearing featuring Daleiden’s testimony will be live-streamed Tuesday morning and can be accessed here.