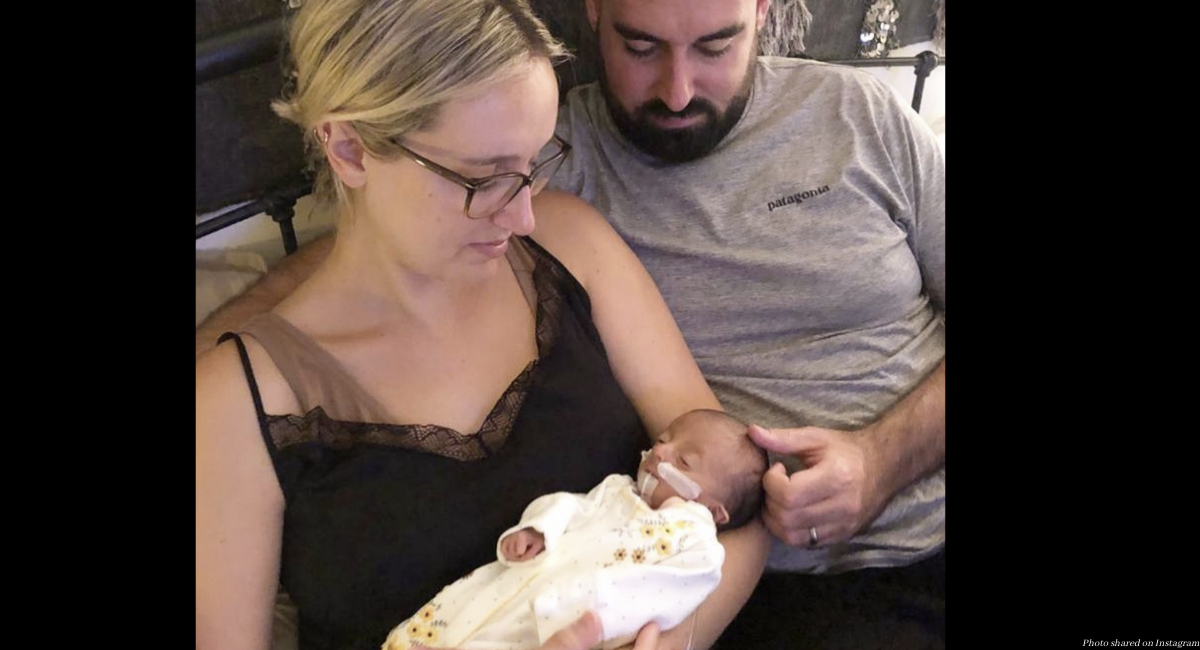 Two parents are speaking about their daughter with Trisomy 18, also called Edwards syndrome, who lived for just 50 days after birth. Her short life meant heartache and pain for them, but she received nothing but love and compassion.

In an interview with Metro, parents Jodie and Jamie explained that they were shocked to learn of their daughter’s expected short life span. Originally, the couple knew there were some issues, but they had no idea the extent of those issues. “We were aware that things weren’t quite right,” Jodie said. “We now know Margot had very typical physical features of a child with Edward’s syndrome: clenched fists, hammer toe, clubbed feet, low set ears, a small jaw, all things that are textbook features, so it is quite baffling no one saw any of those things.”

In July of 2020, Jodie had an induction, with both parents excited to meet their first child. But soon, things took a tragic turn, when doctors came into their room to deliver the news. “I thought she’d died,” Jodie recalled. “Then a doctor said she had some concerns but wasn’t definitive about what those were. You think of all the worst case scenarios and we knew something was quite wrong.”

A few days later, they received the diagnosis: Trisomy 18. The new parents tried to remain hopeful.

“It was completely shocking and devastating,” Jodie said. “We knew there was something, but what we hadn’t prepared for was the condition she had to be life-limiting. It was a lot to take in and then just being left with this A4 sheet of paper from the internet, thinking… What happens now? You latch onto hope – you do think my child might be one of the exceptions to the statistics.”

Jodie and Jamie remained in the NICU with Margot for four weeks, where they said they felt deprived of her first newborn moments. “We felt very connected to our daughter and love her, but there was a disconnect because you’re having to leave your child on their own and it didn’t feel like she was ours when we had to ask for permission to hold her,” Jodie said. “We did have frank medical meetings where we were told: ‘Your daughter’s not going to smile, she’s not going to crawl, she won’t feed.'”

Though some children with Trisomy 18 die either at birth or within a year, others have lived for years. With proper medical care — often denied to children with Edwards syndrome — it is possible for some to live much longer than expected. Despite what doctors told the couple, individuals with Trisomy 18 can smile and learn to crawl and walk.

After a month, Margot’s parents were allowed to take her out of the hospital to spend her final weeks at home. And though it was difficult, they tried to give her as much normalcy as they could.

“We took her shopping and sat and had a lunch, my husband and I,” Jodie said. “It wasn’t without its drama, seeing people give you looks because you’ve got a big oxygen tank strapped to the bottom of your pushchair. We also had a ‘welcome to the world’ picnic with friends and family, though we nearly didn’t do it. That felt like a difficult battle because while we wanted everyone to meet her, we felt like we want to enjoy her ourselves.”

They also had a big celebration, combining her birthdays and Christmases into one party, as they knew Margot wouldn’t live to celebrate them later. “We had balloons and cake and party bags for other children,” she said. “It was just a really happy day and an opportunity to celebrate her, but not in the way you would at a funeral.”

Jodie also started an Instagram account to help other moms deal with infant loss. From there, she has been able to build a community of support.

“Off the back of that I’ve been in contact with other parents, mainly mothers, and I’ve made a good friend with another mother who lost her daughter – that relationship has been invaluable,” she said. “To have the shared experience, that’s the only place where you can truly share everything and the other person really understands. Not having Margot and dealing with her not being here and living the life we thought we were going to live is one side, but then this other side shatters everything. It’s like a ripple effect. Everything’s changed.”

She’s also participating in the You Are Not Alone project, an online exhibition created for Baby Loss Awareness Week. “You can’t be the same person as you were before, it’s just different,” she said. “Everything around you is the same and other people are the same and I think that’s what’s been really challenging – other people carrying on and moving forward with their lives, navigating all of that.” She added that people shouldn’t be scared to talk about their children to parents who experienced loss.

“I think in those early days when your baby’s died, people’s uncomfortableness and not knowing what to say… The silence from people is so incredibly painful. If you don’t know what to say, say something. People worry they’ll say the wrong thing, but you don’t need or want silver linings, you just want basic ‘we’re here.’ You don’t have to be in the inner circle to reach out – it’s not too late. There’s no end point to grieving the loss of your child. It’s something you live with always.”