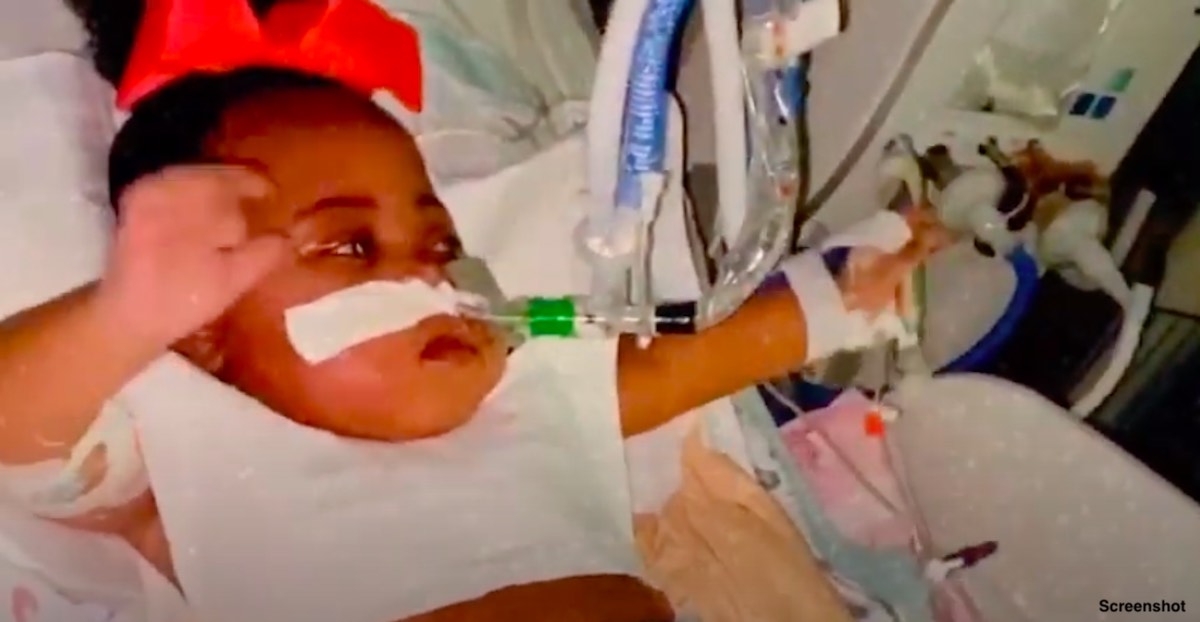 Live Action News first shared Tinslee Lewis’ story back in November of 2019. At that time, Tinslee was nine months old and the center of a court battle between her family and the hospital caring for her. She was born prematurely and suffers from a rare congenital heart defect called Ebstein’s Anomaly, which can ultimately lead to enlargement of the heart as well as heart failure. She also has significant lung disease. Tinslee has been on a ventilator in the ICU for most of her 19 months of life.

In September 2019, an ethics committee at Cook Children’s Hospital in Fort Worth, Texas, decided that Tinslee had no chance of improvement and was in pain. Against the wishes of Tinslee’s mother Trinity, the hospital insisted that Tinslee’s life support should be removed and that she should be allowed to die naturally.

The hospital attempted to invoke the state’s Texas Advance Directives Act, which allows for hospital ethics committees to serve as a last resort decision maker when doctors and patients cannot agree on medical decisions. The Act includes a “10-Day rule” which requires families who disagree with a hospital’s decision to remove a patient’s life support to find another facility willing to take the patient within 10 days. Critics have pointed out that under the 10-Day Rule, “criminals on death row have more rights than patients at Texas hospitals.”

A September 1 press release from Texas Right to Life shared a video from Tinslee’s mother showing the little girl with her eyes open, waving her arms around in the air. Tinslee’s mother Trinity was quoted as saying, “Why do they want to kill my baby so badly? They [Cook Children’s] are telling the judges that Tinslee cannot move or interact, which is not true. Just watch the video.”

Cook Children’s has steadfastly refused to perform a tracheostomy on Tinslee, even though this is the standard medical recommendation for patients who require mechanical ventilation (being on a ventilator) for longer than two weeks. In mid July of this year, a professor in the University of Texas Medical Branch’s division of Cardiovascular and Thoracic Surgery commented on how unusual this refusal is, saying, “Baby T.L. should be treated no differently than any other child who has been on a ventilator this long. Tracheotomies are routinely performed for patients after 14-days on a ventilator. Baby T.L. has been on a ventilator for over 10 months. It is not within the standard realm of care to leave a patient on a ventilator this long and refuse a tracheostomy…. [T]here are very specific patient benefits to performing this procedure.”

In late July, Live Action News reported on the issuance of a temporary injunction against the hospital by the Second Court of Appeals in Fort Worth, mandating that Tinslee is not to be removed from life support until the full trial is completed. This ruling will also allow her family to legally challenge the constitutionality of the 10-Day Rule.

At this time, Cook Children’s continues to refuse to insert a tracheostomy tube, which prevents Tinslee from being transferred to another medical facility for care. The release read, “Court records reveal that… Cook Children’s continues to refuse to provide Tinslee a trach, indicating they will only acquiesce to her mother’s request if Tinslee is discharged to hospice and her mother agrees to a Do-Not-Resuscitate (DNR) order. In other words, the hospital will perform the procedure only if they can guarantee Tinslee will die, not if she is afforded care elsewhere.”

Texas Right to Life noted that seven other families have come forward for assistance with the 10-Day Rule in 2020.