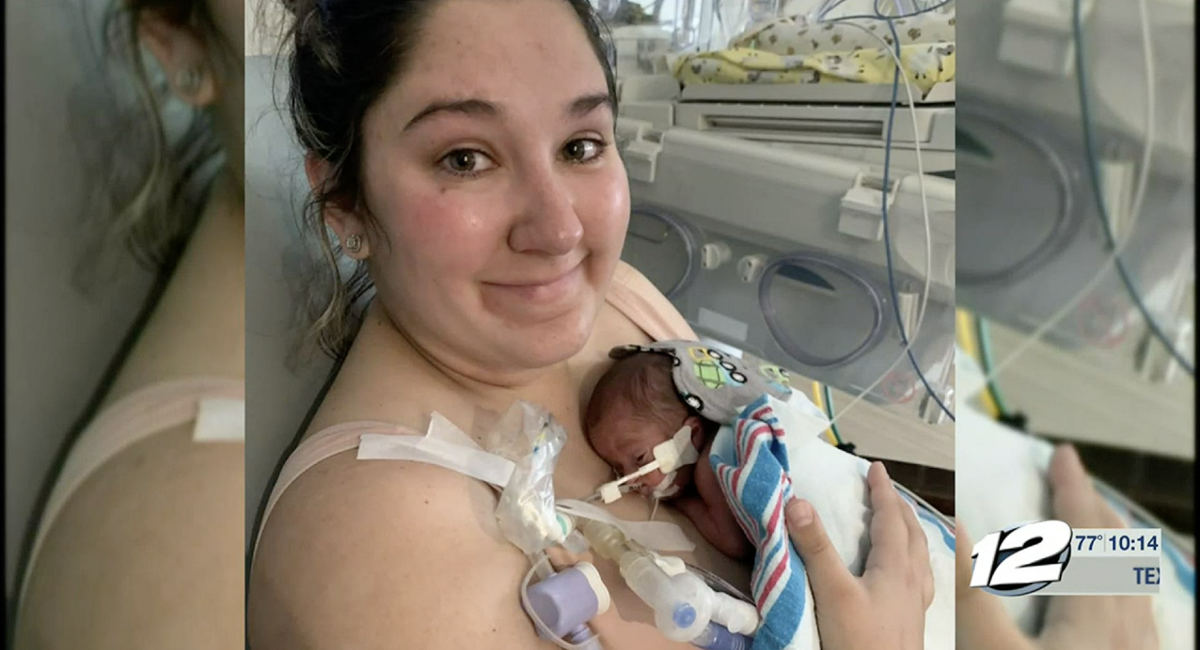 After 82 days in a Texas NICU, baby Slade, a preemie born 11 weeks early, is home with his family.

On April 28, 2021, Slade’s mother Mariaha Jones had an emergency C-section. Texas news station KXII reported that Jones suffered from preeclampsia. She and Baby Slade’s father, Cody, knew they had a difficult road when Slade was born weighing only a bit over two pounds, and even losing some of that weight. “We were scared to death,” said Cody.

For a season in Slade’s early life, it appeared that he would advance, then retreat. His mother stated in a KXII video, “Everyday it seemed that something was always going on and there was so many days we felt complete[ly] hopeless.”

Cody added that he knows preemies survive even earlier than his son. “Considering that babies make it at 23 weeks pretty often, 27 weeks should have been a breeze,” he said, “but we had our rough road and all of our problems and everything and we are just definitely glad to be where we are now.”

“I was honestly really scared I was scared that he wasn’t going to make it,” said Slade’s mother. “I was scared that I wasn’t going to make it, honestly.” But on the day they got the call that they could take their son home, they were elated. “After this long journey, and [it] seemed like everything could possibly go wrong, walking out of those hospital doors was a miracle, to be honest,” she said.

Slade’s survival is a testimony to life, and as technology advances, more preemies born at his gestational age and much younger have an even greater chance of survival. As Live Action News previously reported, many hospitals have fought to save the lives of extremely premature babies, but more consistency is needed. At hospitals across the country, there are disparities in how premature babies are treated. Desperate parents at some hospitals have watched helplessly as medical professionals refused to help, while parents at other hospitals have watched medical professionals do everything possible to save their children.

Preemies have survived with medical care as young as 21 weeks gestation.

The group Twenty-Two Matters features a map of the hospitals which are confirmed to have saved the lives of babies born at 22 weeks. Multiple hospitals across the world are now equipped to save the lives of these preemies. The group’s corresponding Twitter page hosts photos and testimonies of parents — some of whom tragically lost their babies after hospitals refused to try to save them, and others whose babies were saved by hospitals at 22 weeks and younger.

Kim Cogburn wrote:
“I lost my baby girl at 22 +6 weeks in 2018 as I went into preterm labor. I was in a level 4 nicu hospital that refused to help my baby. We held her for 2 hours until her heart stopped 😪.”#TwentyTwoMatters pic.twitter.com/S768nZXCm6

Meet Fayth 💓
Born at 21 weeks 5 days, she weighed 576 grams. Her mama proclaims her as “a whole personality all on her own.” Fayth turned 8 in June & her mom reports you would never know she was a micropreemie.
Fayth’s guardian angel is her twin sister, Cerenity (last photo) pic.twitter.com/aSh5e0HdeW

These children are reminders that even while the abortion industry tells women that babies are mere clumps of cells, there is genuine life inside the womb — and that life is a human being that can live and thrive.