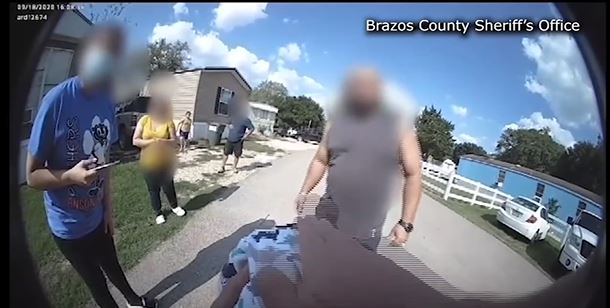 A sheriff’s deputy in Houston, Texas, is being hailed as a hero after he helped save a newborn baby boy who had stopped breathing.

The incident was caught on the body camera of Deputy Adam Dodson, who was the first to arrive on the scene on September 18, where a limp and lifeless 20-day-old baby boy was choking. The baby was unconscious and turning purple, and CPR was being performed when Dodson arrived. Dodson took the baby from his distraught parents and began performing techniques he had learned in training, and again when he had his own child, including the Heimlich maneuver for infants, which involves patting the child on the back to dislodge anything stuck in the throat.

“So, I went ahead and flipped the baby over on his stomach and chest on my forearm and began giving back strikes to the baby,” he told WCVB. “Where the parents were currently and how distraught they were and emotional, I knew that somebody had to be there to remain — I don’t want to necessarily say strong, but I would say maintain composure. And I had a job to do.”

Dodson continued to perform the techniques as they anxiously waited for the paramedics to arrive. A neighbor helped to translate the conversation between Dodson and the baby’s family.

“After what seemed to be the longest minute of his life, Deputy Dodson observed the baby becoming responsive and starting to breathe on his own,” officials said.

The baby was taken to the hospital for further care, and medics later called Dodson to tell him, “Good job on that call, you saved that baby’s life.”

Dodson received the Life Saving Medal but doesn’t consider himself a hero. He said he was just doing his job. “I was the first person there that could help the child,” he said, “and I did what I thought was right, what I thought that most people or the abundance of people would do.”

The sheriff’s office released a statement saying, “Adam’s calm and decisive action unquestionably saved this baby’s life, and he, without a doubt, deserves to be awarded the Life Saving Medal.”