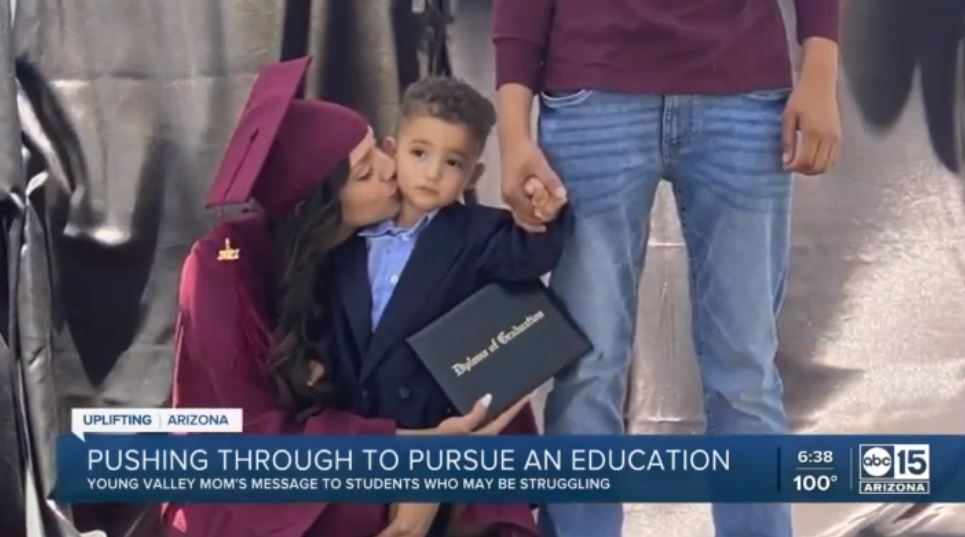 Another young woman has proven that the anti-woman idea that women can’t be mothers and achieve their goals is completely false. Odalis Contreras, 18, learned she was pregnant when she was just a high school sophomore. As a teen mom, she was afraid that she wouldn’t be able to graduate, but with support from her family and her guidance counselor, she graduated on time this spring.

“Education is the most important to me because it has a higher chance of taking me out of poverty than anything else,” she told Good Morning America. But she wasn’t just concerned about herself. She wanted to be a good example to her son Angel.

“If I didn’t finish high school or if I don’t start college and finish it then I feel like he’s going to follow down that path,” she explained.

Angel was born prematurely in January 2019, causing Contreras to miss a month’s worth of school. She fell behind, but decided to transfer to ASU Prep Digital, an online school founded by Arizona State University, that allowed her to be a full-time student on her own schedule. It meant she could care for her son and continue taking her classes. She spent her days with Angel, and her nights completing her schoolwork as he slept.

“I didn’t sleep for the first four months,” she said. “It was hard. It was mentally draining at points because I didn’t know if it was going to be worth it at the end.”

She told ABC15, “There were so many times where I just didn’t want to keep going and I just kept seeing him there laying down and he didn’t ask to be here, and I just want to give him the best life that I can give him.”

Thankfully, she had support to help her push through. Karen Sanderson, a learning success coach at ASU Prep Digital, helped Contreras create a plan to graduate on time. She was able to take eight classes a semester, four per eight weeks, as well as summer classes. Sanderson explained that helping her stay on track is a “huge, huge part of my job.”

“Ms. Sanderson was always on top of my grades — on top of everything,” Contreras said. “When I wouldn’t log into school for just one day she would text me, ‘Is everything okay? Did anything happen at home? Are you fine?'”

In addition to the support from Sanderson, Contreras’ mother was there for her, babysitting Angel. She took six months off of work just to help her daughter and grandson. And she continued to do so after returning to work, keeping him busy so his mom could focus on school. “It was hard for her but she loves him so much,” Contreras said. “She would do anything for him.”

While it was nice to have that quiet time to work, Contreras said when Angel isn’t around “the house feels lonely.” And when it finally came time to graduate and see that all of her hard work had paid off, two-year-old Angel was there by her side, walking across the stage.

READ: As a teen mom, Mackenzie chose life twice: ‘I have the motivation to work hard every day’

“He deserves it too,” she said.

Contreras plans to attend South Mountain Community College and then transfer to Arizona State after two years. She plans to either go into real estate or become a newborn intensive care unit nurse. It’s something that’s been on her heart since Angel himself spent time in the NICU. She wants to encourage others to keep going even when they want to quit.

“Whatever you’re doing,” she said, “you’re doing it to better yourself.”

Our abortion-friendly culture has conditioned women and girls to believe they can’t be successful mothers while attending school or building a career. But Contreras and others, like teen mom Lamyrical Harris, are proving this to be false. Harris had a baby in high school and also became the first in her school’s history to be offered more than $1 million in academic scholarships. Mothers are strong and capable and with support from others, they can achieve their dreams.