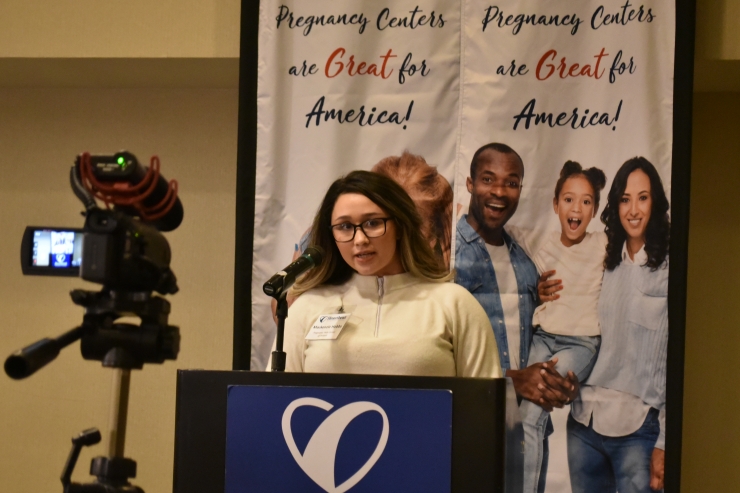 Exhausted from emotion and lack of sleep, Mackenzie walked through the doors of the Pregnancy Help Center of Artesia—a non-profit pro-life hub located in southern New Mexico—and met Amanda Ramsey, the center’s executive director and co-founder.

That meeting changed everything.

“I was scared because I was only 17 and had yet to tell a single soul, anxious because a million thoughts were running through my mind,” Mackenzie wrote in a reflection. “And Amanda listened to every one of those thoughts and fears and worries.

“I didn’t want a baby; it was about to be my senior year of high school and I wanted to go to college and get started on my life first,” she wrote. “Until I realized it wasn’t about just my life anymore. Through the help at the pregnancy center, I learned my baby’s life was just as important as mine, and I learned the choice I made for my son was the most important choice I would ever make.”

By this point, the father of her unborn child had moved and Mackenzie knew she couldn’t count on the support of her family. Miserable from morning sickness, Mackenzie quit her waitressing job but persisted at school.

“I was scared, but the center helped me be confidently scared,” Mackenzie wrote.

She began attending parenting classes, very much aware of her single-parent-teen-mom status as she looked around the room, noticing the other women’s partners. That didn’t deter her.

“However, with each class I attended, I learned more and more about how I could actually take care of the little baby whose life depended on mine,” she wrote. “I was scared, but I became excited. They were teaching us everything from parenting to the formation of the baby. I was learning nearly everything about being my baby’s mother and learning everything he was going through inside of me.”

READ: Moms go to Congress to explain why they gave life to their babies

The classes also provided information on prenatal care, labor, and delivery, empowering her in the lead-up to her baby’s birth.

“The classes at the pregnancy center made me feel comfortable with having my baby and also helped me feel confident in the choices I made for my baby and my body,” she wrote. “From the glucose test to the epidural, everything was my choice. I learned how to change a diaper, how to swaddle my baby, and how to properly breastfeed. I began feeling as if I could actually be a confident mother.”

Along with education, the center provided Mackenzie with some pricey essentials, including a breast pump and a car seat. When her son finally made his appearance, Mackenzie was blown away by her love for her child.

“Then the day came where my precious son was in my arms and it was at that moment that I found the definition and meaning of love,” she wrote. “It was then I realized how amazing life was and how amazing it was to give life to him.”

So impactful was her love for her son Dezmond that when she discovered she was pregnant again several weeks later, she wasn’t shaken.

“Because of the bond I grew with my son, I did not hesitate about my options when I found out I was pregnant with my daughter,” Mackenzie said.

Empowered to take on the world

Four years after the birth of her son, Mackenzie and her family maintain a strong bond with the Pregnancy Center of Artesia. So strong, in fact, that the center nominated Mackenzie to share her story at a major event in Washington D.C.—Heartbeat International’s Babies Go to Congress, a program designed to educate lawmakers on the life-saving work of pregnancy help organizations.

Mackenzie eagerly accepted the opportunity when she was chosen by Heartbeat to join the team of five other moms and pregnancy help centers from across the country.

Then, just a few days before leaving for the trip this January, Mackenzie received news that her son’s father was not going to allow him to travel.

“This was devastating to Mackenzie,” said Ramsey, the center’s director, who traveled with her. “She felt defeated before we even left.”

Still, Heartbeat encouraged Mackenzie and Ramsey to make the trip.

“She struggled,” said Ramsey. “All the new sights and sounds, she wanted to share with Dezmond.”

To take her mind off of missing her son, the duo arrived in D.C. early and did some sightseeing. One of their stops was the Holocaust Museum.

“It was quite profound to watch her as we traveled to each floor,” Ramsey said. “I shared with her the similarities between the Holocaust and abortion. She was speechless.”

The next day, Mackenzie and Ramsey visited Capitol Hill to meet with the offices of their two U.S. Senators and two U.S. Representatives. While there, they explored the underground system that connects the many office buildings and learned more about the country’s history. Although Mackenzie had begun the day heartbroken over the absence of her son, she left feeling energized by having shared her story.

“We very much enjoyed the experience and Mackenzie shared with me she felt empowered to take on the world,” Ramsey said.

At the end of the week, Ramsey and Mackenzie joined hundreds of thousands of other pro-lifers at the annual March for Life, and even got the chance to see President Donald Trump give the first-ever presidential speech at the event.

The two returned to New Mexico refreshed for the cause for life.

“The entire trip was put together like a symphony,” Ramsey said. “That 17-year-old—who wasn’t even sure about having a baby just four years ago—had an audience of congressmen and women. What an honor! Choosing life is something to celebrate! The combination of the Holocaust Museum, sharing her story with Congress and marching for life has made Mackenzie a pro-life advocate!”

Now with a cross-country trip to Capitol Hill under her belt, Mackenzie continues to excel as a mother, student, and teacher at a local hospital.

Her success, she said, is driven entirely by the two children she chose life for just a few years ago.

“With the bond of both of them in my corner, I have the motivation to work hard every day,” she said.