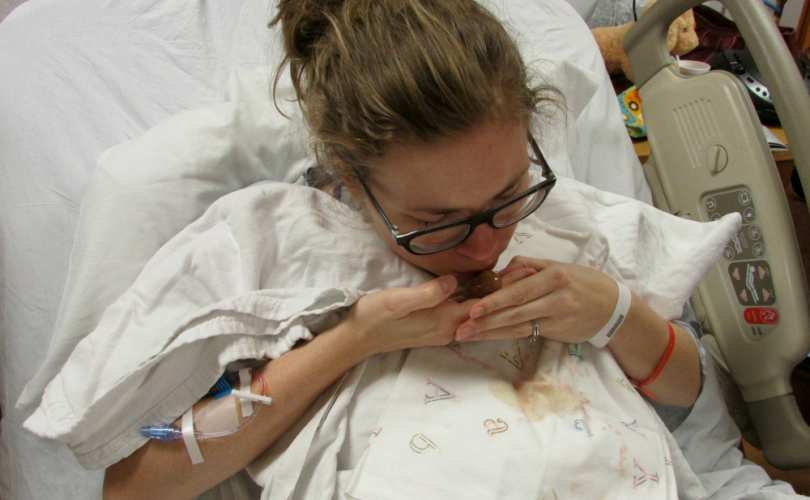 It was the best of times for Planned Parenthood workers in Colorado who picked apart the remains of an aborted 11.6-week-old aborted baby while fetal procurement buyers stood there ready to pay money per organ. He is known as #AnotherBoy.

It was the worst of times in East Texas when Allison and Daniel found out their son, just 13 days older than the baby in Colorado had died in Allison’s womb. He is known as Nathan Isaiah.

As the Planned Parenthood scandal has grown weekly, virtually all of the most read stories on Live Action News have reflected that scandal. But one story has hovered in the top stories, shining light in the midst of the stories heralding death – the story of Nathan and his 13 week and 4 day life.

It seemed a curious thing for a story from September of 2013 suddenly appear on the most-read list again – just weeks before the Planned Parenthood scandal broke. In June, the story suddenly became a most-read story again on LifeSite News, who ran the Live Action story back in 2013, as well. When the Planned Parenthood story broke, it seemed likely Nathan’s resurgence for the four weeks previous would come to an end as the abortion revelations created an uptick in breaking story production.

Nathan, a contrast to what Planned Parenthood does, has remained a picture of what honoring life looks like. While Planned Parenthood researchers took the dead baby and rifled through for his heart and brain, even finding an eyeball, Allison and Daniel’s story showed the deep loss of a loved child.

At the time, Allison said:

From [the time I found out I had miscarried him} moment, I only had two requests from the Lord. I didn’t know what to expect and how things would go, but I knew that I absolutely did not want my baby ripped apart in an abortion-like procedure and discarded in some trashcan like he was worthless. I wanted to have my baby and take him home and give him the dignity of a burial.

They told me that a DNC is not as effective after 13 weeks in removing everything that needed to be removed and that I would need to be induced and have the baby in the hospital in Labor and Delivery, and that I would be able to take my baby home and bury him.  A surge of validation, satisfaction, thankfulness, and relief flooded my heart! Just four days sooner and my baby’s body would have possibly been subjected to unspeakable horrors and possibly discarded like waste. How could such a thing be?

She birthed her son, a statement of honor for his life as a human being. And when he came out of her womb, she noted: “His little body was so perfect, with ten tiny fingers and ten tiny toes. He had a nose, a mouth, two little eyes and ears.” Of course, #AnotherBoy had the same parts when he came out of the womb at Planned Parenthood of the Rocky Mountains (PPRM). But his parts were put in a pie pan where technician with tweezers picked them apart for procurement to a biotech company. #AnotherBoy wasn’t ever considered alive because he died by abortion.

Ironically, Allison’s case is one where ethical fetal tissue donation might play in. Few would fault a mother, who lost her child by no choice of her own, if she let his organs and tissue be used for research. But her son was too precious to sacrifice, even though she could not choose for him to live.

Over at PPRM, the only thing encouraged was a choice to kill a baby, which a woman is told is a blob of tissue—who suddenly metamorphoses into a baby once he’s aborted.

This tale of two babies who died has two different endings. One life has lived on as a picture of hope, redemption, and life. The other has become a picture of death and destruction, bringing despair to women who found out their babies may have been treated the same way.

Allison gave Nathan his name because it means “gift of God.” While Allison and her family cherished their gift, giving him honor in life and death, Planned Parenthood uses these gifts for financial gain and experimental research.

The picture emanating from Planned Parenthood truly shows the worst of times, the darkness of a nation and its complicity with death. It shows a culture that profits off the shedding of innocent blood.

The picture emanating from Nathan shows the best of times, a culture that honors all life as a gift and cherishes it even in death. It shows a culture that grieves loss rather than profits from it.

Ultimately, that’s probably why the picture of Nathan remains on the most-read sidebar on Live Action News even now: Because people know life is sacred and need to see a picture of hope in a nation that is seeing the despair.