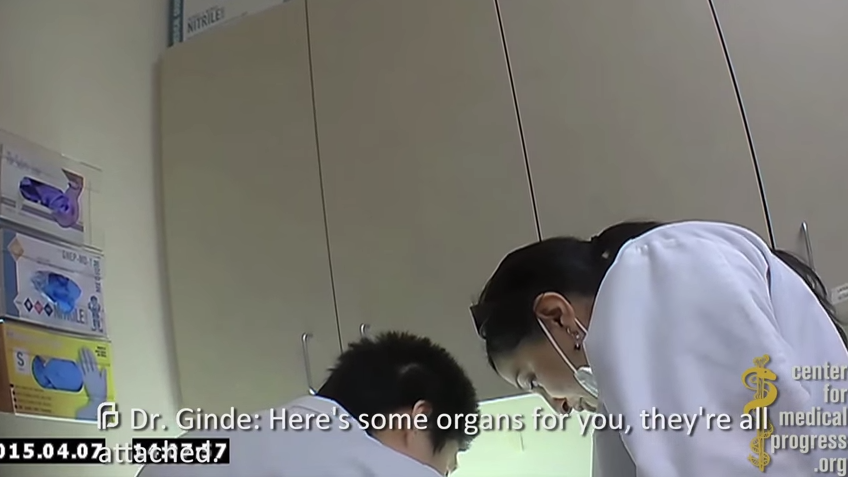 CONTENT WARNING: This article contains screenshots below of Planned Parenthood staff sorting body parts such as kidney and heart from an 11-week human fetus.

Planned Parenthood once again finds itself at the center of scandal as new undercover footage was released today by The Center for Medical Progress. The tapes, which are dated April 7, 2015, show staff from Planned Parenthood’s Rocky Mountains affiliate, located in Denver, Colorado, engaging in negotiations over human fetal body parts.

The video opens with a negotiation between Vice President and Medical Director of Planned Parenthood of the Rocky Mountains Dr. Savita Ginde and a potential buyer for fetal body parts. Ginde is seen saying, “I know I’ve seen livers, I’ve seen stomachs, I’ve seen plenty of neural tissue. Usually you can see the whole brain usually come out.”

To preserve the organs, Ginde says that “we’d have to do a little bit of training” to ensure staff “didn’t crush” the parts that were wanted. Ginde warned about legal risks saying “if you have someone in a really anti [abortion] state that’s going to be doing this for you, they’re probably going to get caught.” She continued that they told their lawyer that, “we don’t want to get called on selling fetal parts across states.”

The video then cuts to the laboratory where a Planned Parenthood technician can be seen sorting through parts of aborted babies. Dr. Ginde tells the prospective buyer that they would likely structure the arrangement on a “per item,” rather than a flat fee:  “I think a per-item thing works a little better, just because we can see how much we can get out of it.”

During the parts sorting process of child terminated in the first trimester, Ginde notes, “Here’s a stomach, kidney, heart.” She further explains that the second trimester babies are “so big” that they won’t “be as war-torn.” An unnamed technician later exclaims, “and another boy!” after finding a body section with legs.

As the outrage only continues to grow, Congress and the President must act immediately to stop the forced taxpayer funding of these horrific and barbaric facilities.

In the first tape, which has been viewed almost 3 million times, Planned Parenthood Senior Medical Director Dr. Deborah Nucatola discusses the potential sale of fetal body parts which is illegal under federal law. The punishment for such an act is fines and/or up to 10 years in prison. This video is embedded below:

Future videos from inside Planned Parenthood are expected as David Daleiden, Project Lead for The Center for Medical Progress, told Sean Hannity’s radio program Tuesday that: “We have close to 300 hours total of undercover video that was gathered during a 30 month long in depth investigative journalism study of how Planned Parenthood sells the body parts of the babies they abort.”

In response to the videos, Planned Parenthood President Cecile Richards apologized saying “the tone was terribly wrong” but stated that her organization was innocent. In the interview she refrained from addressing the specific statements by Planned Parenthood directors that appear to violate U.S. law. Richards also blasted the first two videos as being “highly edited” although full, unedited tapes were released alongside shortened versions that highlighted key interactions.

Planned Parenthood has also hired SKDKnickerbocker, a high-powered crisis management firm, which distributed a memo to reporters asking them to not show the video to protect the privacy of patients. In our review, no Planned Parenthood patients were seen on the tapes.

Over half a dozen state investigations have been launched into Planned Parenthood’s actions with the Texas State Senate health and human services committee holding a hearing Tuesday. Planned Parenthood was asked to testify but refused to attend.

Congress is also conducting its own investigation and a measure was introduced in the U.S. Senate by Joni Ernst, Rand Paul, and James Lankford to defund Planned Parenthood of taxpayer support. Senator Lankford remarked that, “It is time for federal taxpayer funding for Planned Parenthood to end and let community health centers use that funding to provide health care services for those in greatest need.”