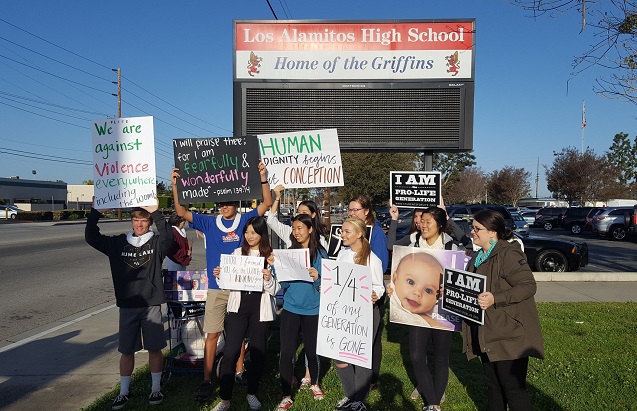 Over 250 high schools and 80 colleges across the United States participated in the Pro-life Walkout on Wednesday, April 11, 2018. The students walked out of classes at 10:00 am for 17 minutes of silence and prayer in honor of the ten children that were killed in those 17 minutes at Planned Parenthood facilities across the country.

At Rocklin High School in Sacramento, California, where the pro-life walkout began with student Brandon Gillespie, community members stood just off of school grounds holding pro-life signs and sharing their support for the pro-life students. Students for Life of America’s Anna Arend was there live.

At Moriarty High School in New Mexico, students said they participated in the walkout because 46 percent of abortions are committed on women and girls under age 25.

“So that means that there may be girls even here at Moriarty High School today who are considering abortion or who have experienced abortion or who may be right now at an abortion facility to get an abortion,” said Students for Life’s Bethany Janzen. (In the video below, some counter protesters are present.)

Students for Life’s East Coast Regional Director Michele Hendrickson was live on Facebook at Frederick East Classical High in Maryland. A school administrator who was present at the walkout stated that she wanted to make students aware that abortion is an issue for their generation especially since many of their fellow students are missing due to abortion.

The Archdiocese of Atlanta Catholic Schools tweeted this picture of a seventh-grade pro-life student who led over 100 of her classmates in the Rosary in honor of the walkout.

So proud of @HRcardinal‘s 7th grade student who led her fellow classmates in a #Rosary in response to National #ProLifeWalkout Day. Over 100 students voluntarily gathered at 7:30am to join her in prayer. #PrayerWorks #PrayerIsPower #ProLife #ProLifeGeneration #MotherMaryPrayForUs pic.twitter.com/TNRm6OzVkK

Across the country pro-life students let their voices be heard despite the setbacks they faced, including pushback from school administrators and counter-protests from pro-choice students.

Remember: There is no excuse good enough to take an innocent life.

To get a #prolife mindset you have to change from within. It’s not about us. It’s about them. Be selfless.

Proud to stand with Morality High School students during their time of silence for the their classmates lost to abortion and women hurt at during the #ProLifeWalkout! pic.twitter.com/CJekGhuGFr

Every 17 minutes 10 lives are lost, something needs to change #prolifewalkout

Gillespie was inspired to plan the pro-life walkout after his teacher was placed on leave for suggesting that the same type of walkout that was allowed in regards to gun violence would not be allowed for other issues such as abortion. A fellow student and editor of the school newspaper said the pro-life walkout shouldn’t be allowed because abortion isn’t a topic that has to do with school. Gillespie disagrees.