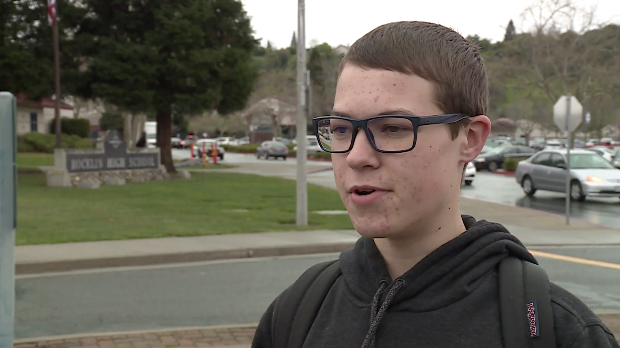 On April 11, 2018, pro-life high school students will walk out of their schools at 10 am for 17 minutes, to stand up for the lives of preborn children and spark a much-needed conversation about abortion.

Brandon Gillespie, a student at Rocklin High School in Sacramento, California, saw an opportunity for a pro-life walkout after students across the country staged walkouts against access to guns and gun violence in schools. One of Gillespie’s teachers, Julianne Benzel, was placed on administrative leave after asking the students if they think there is a double standard and if there were an abortion walkout, whether the school would support it as they supported the gun violence walkout. That got Gillespie thinking.

“My teacher was placed on administrative leave because she simply asked the question of is there is a double standard,” Gillespie told Live Action News. “That really inspired me and I wanted to put that to the test and see if the school district would allow a walkout for students with a more conservative topic.”

Gillespie scheduled a meeting with the school principal Dave Stewart on March 23, 2018, and while he has yet to receive an answer, Gillespie is moving forward with a plan for the pro-life walkout.

“I met with him on Friday and he was unable to give me a direct answer as to whether or not I could have the walkout,” explained Gillespie. “He said he has to talk to more people from the school district about it. I’m asking for the exact same thing as the other group except it’s a different topic. He will be getting back to me on April 2nd.”

Gillespie believes he will receive approval for the walkout since he is requesting the exact same time and duration for his walkout as the school approved for the gun violence walkout. If the pro-life walkout is refused, that would prove there is a double standard.

“If he says we can’t do it, I’m not sure what I’m going to do yet,” said Gillespie. “But it would be a violation of my First Amendment and 14th Amendment rights. Most likely I would work with a legal team, but I’m not 100 percent sure yet.”

Gillespie said that about 75 percent of Rocklin students participated in the walkout on gun violence, but he is unsure of how many students may join him for the pro-life walkout. However, students from around the United States have been contacting him on planning walkouts at their own schools.

“I’ve been spreading the word through social media on Twitter with #life and #prolifewalkout,” he said. “A lot of people have contacted me saying they like what I’m doing and they want to talk to their school about it.”

Students for Life of America has also reached out to Gillespie, providing him with support, legal help, and training, as well as advice on building a website and using social media.

Along with support, Gillespie has received criticism, including from the editor of his high school newspaper. Naeirika Neev wrote in an editorial:

[…]  the controversy of abortions has nothing to do with the school administration or the school environment. Therefore, it is unreasonable for such protest to take place on school ground, during school time and unreasonable to make such comparison.

Neev also said, “Abortions aren’t really anything that has to do with school or students here.”

Gillespie is hoping that the pro-life walkout will raise awareness of the issue of abortion and the cruel injustices taking place in abortion clinics, specifically Planned Parenthood facilities, nationwide. He says that the killing of innocent preborn children and the fact that taxpayer dollars are used to fund Planned Parenthood are injustices that need to be stopped.

In addition, Planned Parenthood works to position itself within the public school system in order to indoctrinate teens, preteens, and children and create future clients out of them. They gain their trust so that when the teens become pregnant, they turn to Planned Parenthood which tells them that they are too young to have a child and pushes them to abort.

“Planned Parenthood is targeting teenagers because teens can go into these Planned Parenthood clinics and don’t even have to tell their parents they’re having an abortion,” said Gillespie. “They can go in themselves without parental supervision.”

Major media outlets such as CNN and NBC have been silent regarding the pro-life walkouts, but Fox News and ABC News have both covered the planned event. Pro-life students who are interested in holding their own walkouts can visit ProLifeWalkout.org.

For the 17 minutes the pro-life students will stand outside their schools, 10 preborn children will be killed through the violence of abortion at Planned Parenthood facilities. Gillespie hopes that shining a light on the truth about abortion will help end it and inspire people to choose life.