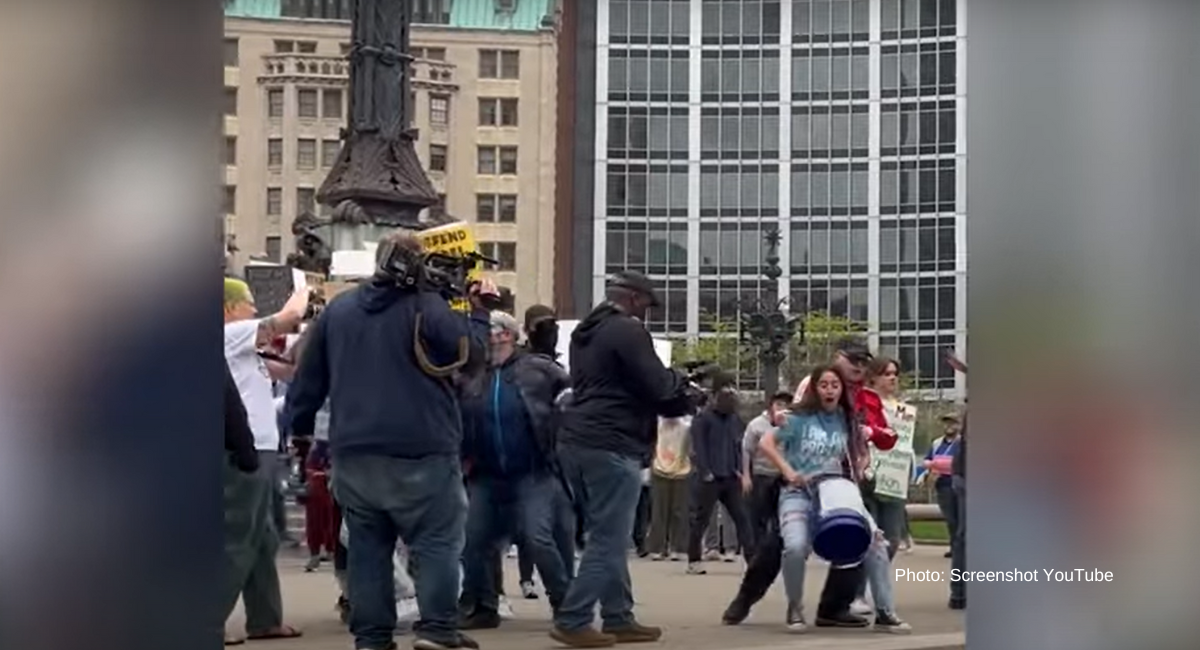 Since the leak of a Supreme Court draft opinion appearing to overturn Roe v. Wade, abortion activists have retaliated with violence across the nation. Multiple pro-life offices have been firebombed and pregnancy resource centers have been vandalized. Other protesters have harassed Supreme Court justices at their homes. And now, another incident has come to light, with abortion activists assaulting pro-life students.

Mary Carmen Zakrajsek, the Indiana Regional Coordinator for Students for Life of America (SFLA), wrote about her experience attending a rally in Indianapolis last week. The “Defend Roe Emergency Rally” was held at the steps of Monument Circle, a public venue in downtown Indianapolis. Zakrajsek said their local SFLA chapter decided they couldn’t let the rally go on unanswered.

“Over 30 members of the Pro-Life Generation gathered in counter protest to show the city of Indianapolis that we have just as much passion, zeal, and energy for our cause as they do theirs,” she wrote. “We were joyful and celebratory as the United States Supreme Court appears ready to strike down the bloodiest court case in our nation’s history.”

Yet the group of 30 pro-life students was met by hundreds of abortion supporters, who quickly became angry. “Immediately upon arriving, my group members and I were shoved, grabbed, and swarmed as we tried to ascend the steps of Indianapolis’ biggest monument where everyone was gathered,” she said, adding, “Rather than sharing the space, we were assaulted, harassed, shoved by hands and bicycle tires, screamed at, and pushed off the steps of the monument by the abortion lobby. All of this merely because we believe children have the right to live. Their behavior was despicable. It was no longer a rally — they had turned it into a riot.”

READ: Lila Rose on Tucker Carlson: ‘When people learn… what abortion is, they change’

Zakrajsek herself was one of the people assaulted. Jessica Louise, the spokesperson for Indy10 Black Lives Matter, grabbed Zakrajsek, who said Louise was screaming into her ear, put her into a headlock, and held her against her will, while Zakrajsek screamed that she had a right to be there.

“This is the irony of the abortion lobby,” Zakrajsek continued. “They call themselves ‘pro-woman’ and yet physically assault women. They talk about protecting women and yet violently attack them. They do not want other options for women — their actions show anything but concern for women.”

Despite the violence, the pro-life group remained, and the attacks against them did not subside. “In addition to being assaulted, we were taunted, harassed, mocked, flipped off, and wished ill will,” Zakrajsek said. “The abortion supporters brutally harassed minors and doxed high school students’ names on social media who agreed with our side. When we paraded around the monument, they began to follow, screaming after us, ‘My Body, My Choice.'”

Jacob Stewart, another pro-life advocate, was present at the rally and wrote about his experience at the Campus Citizen. He also interviewed Zakrajsek. “The attacks we just experienced are nothing compared to what so many preborn children have faced,” she told him. “This is just the beginning. And this is how we know we’re part of something much bigger than ourselves. Let that remind us why we’re here. There’s a lot of people angry and hurting tonight. Let us remember to show them love and compassion and that abortion is not the only way.”