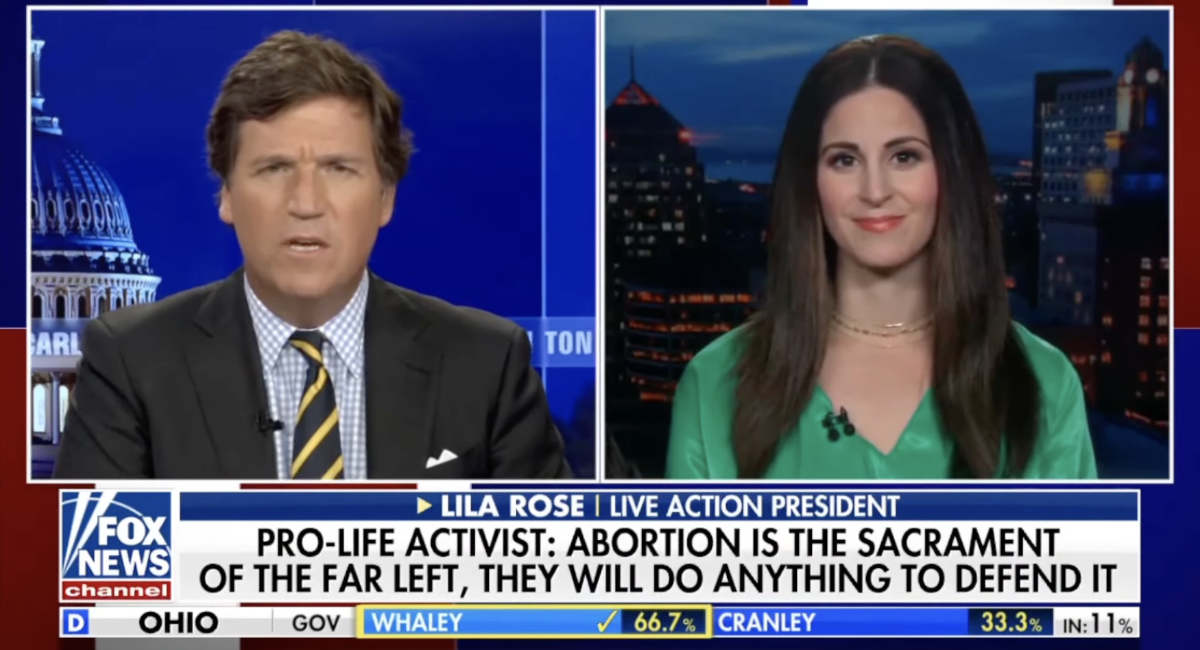 Live Action Founder and President Lila Rose recently appeared on Tucker Carlson Tonight to discuss the future of abortion in America in light of the leaked draft opinion on Dobbs v Jackson Women’s Health, which calls for the overturning of Roe v Wade.

After commenting on the lack of true dialogue and the general public’s low level of education regarding abortion, Carlson commented, “Maybe one upside of this [overturning Roe] is, we can have a real conversation about abortion.”

I think you’re right … I’ve spent the last 15 years of my life, my entire adult and teenage life, working to educate people about abortion. And I’ve seen people flip from pro-choice to pro-life simply by learning, not just about human development in the womb, but by learning about what abortion actually does. How it suctions a developing child into pieces, how it dismembers a tiny child, a lethal injection that pierces a second trimester baby’s heart.

When people learn these disturbing, horrific truths about what abortion is, they change. … And so we’re going to see an awakening that is already underway, but it’s only going to grow when people will be forced to grapple with the reality of what abortion is.

Carlson suggested that, if people “can look [the reality of abortion] right in the face and say they support it, and say, ‘That looks like the road to happiness,’ okay. Then they can vote for it. But if there’s no vote on this stuff, how can you call this a democracy?”

READ: When People Learn, They Change: ‘I had no idea that’s how an abortion is performed’

But Rose replied by calling into question the idea that society should get to vote on who lives and dies:

[A]t the end of the day, even a democracy shouldn’t get to decide who lives and dies … it shouldn’t be up for a vote. … [I]t would be a compromise to send abortion back to the states. But that’s not full justice …

Carlson and Rose also briefly discussed the “meltdown” currently happening among abortion supporters. Rose referred to it as a “massive tantrum,” but emphasized the importance of educating about the truth of abortion, repeatedly making the point that “when they learn, they change.”