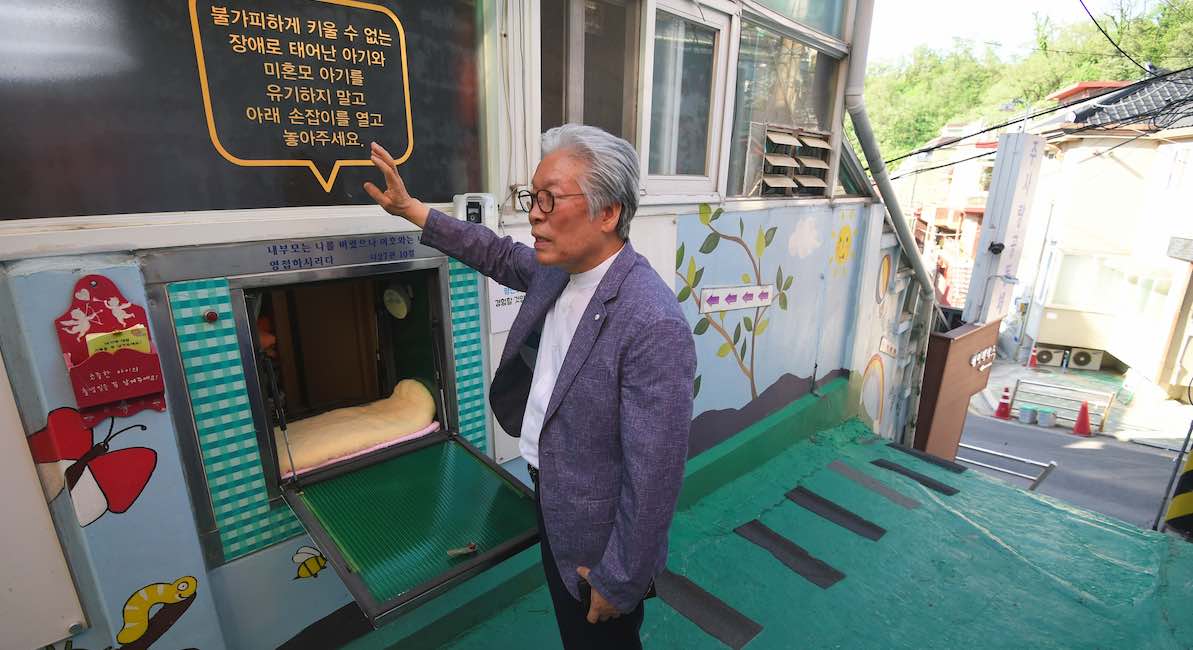 In July, new media company Asian Boss interviewed a South Korean pastor known for starting a ministry in Seoul to save babies from abandonment and death. Pastor Jong-rak Lee gained immense popularity outside his home country after he installed a “baby box” in the side of his home years ago, after vulnerable parents began to leave their babies on his doorstep. A documentary about Pastor Lee, The Baby Box, was made, and not long after, groups in the United States began similar efforts to install baby drop boxes in various locations. Along with this, each U.S. state has its own “safe haven” law, allowing parents to leave newborns with first responders and/or hospital staff anonymously, without fear of punishment.

Asian Boss found Pastor Lee’s story incredibly compelling and inspiring, and did an interview with him, which they then posted on their YouTube page. It appears from the video that the Babybox Korea ministry has grown substantially since the time of The Drop Box documentary’s release in 2015.

Pastor Lee says that the ministry takes in 220-250 babies yearly. Things are very difficult for single and teen mothers in South Korea, he says, and the baby box installed through his ministry has saved the lives of about 1,600 children over the past ten years. About 60% of the others, he says, are teens — one he recalls was as young as 13. Some of the babies have disabilities, some have been conceived in rape or incest, and some are left in the baby box because of other difficult circumstances.

But as you can see from the video above, mothers who choose not to abort their children but instead give them life, even if they cannot raise the children themselves, are seen as heroes to those with the Babybox Korea ministry. “You could’ve chosen to abort the child, but you didn’t, and saved that baby’s life. And you brought the baby here, so we want to thank you,” says the Jusarang Community’s Manager, Lim Sun Ju, in the video, speaking of the babies’ mothers.

Pastor Lee showed the Asian Boss interviewer about 15 large books filled with letters of remorse from the babies’ mothers to their children. It is clear from their letters that the mothers love their children and want better lives for them. Pastor Lee has been able to raise more than ten of these children with his wife (as can be seen in The Drop Box documentary, available to rent on Amazon Prime), and the rest have either been placed with adoptive families, or their parents have returned to claim them — the latter, Pastor Lee says, happens about 30% of the time. The ministry offers counseling for the parents who bring their children to the drop box, and encourages parents to keep and parent their babies if they can, with the ministry’s assistance offering material support and supplies. But if parents simply cannot care for their children, counseling is strongly encouraged. “Just because you left your child here, don’t live the rest of your life with remorse,” says Lim Sun Ju.

In December, several months after the original interview above, Asian Boss returned to Pastor Lee’s church to surprise him with a large donation (equivalent to about $64,000 USD) given online by donors around the world, and brought along several individuals — including a family who adopted two little girls taken in by Pastor Lee and his team — who wanted to thank the Babybox ministry team for their incredible and selfless work.

In the video below is one of Pastor Lee’s adopted sons, who helps Asian Boss to pull off the surprise with his father:

It is Pastor Lee’s hope that the Babybox ministry can expand further to make it so that no parent ever feels that he or she must leave their child in the baby box, and the donation made will help them to save more babies and help more desperate parents in need. He says in the video that the generosity of others in donating toward the ministry “makes me renew my devotion towards this cause.” He added, “And I’ll open my eyes and heart even wider and make sure that they are not left for dead. This is what I will continue to do. And we will carry the responsibility as a father and mother to these children.”

Pastor Lee’s ministry is truly amazing, and is a testament to the power of one individual’s willingness to act on behalf of the lives of other vulnerable human beings. His actions have inspired others around the world to do the same. Watch the trailer for The Drop Box documentary below: