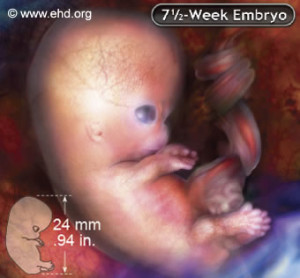 Source: The Endowment for Human Development

Planned Parenthood takes great pains to describe itself in the rosiest way possible:

We are a trusted health care provider, an informed educator, a passionate advocate, and a global partner helping similar organizations around the world. …

For nearly 100 years, Planned Parenthood has promoted a **commonsense approach to women’s health and well-being, based on respect for each individual’s right to make informed, independent decisions about health, sex, and family planning.

But is America’s abortion giant (who performed a record 333,964 abortions in 2012 while receiving “45 percent of its revenues from taxpayer-funded government sources”) actually an “informed” educator? Is the organization’s approach really “commonsense”? Is it truly “based on respect” and the ability to make “informed” decisions?

In the video below, Planned Parenthood’s college outreach group, “Advocates for Choice” advocates for completely false and shoddy science. They tell the college students:

The fact is that science is on the side of the pro-life movement – ultrasound, in-utero photography, and graphic images of aborted children all prove the humanity of the unborn child beyond any shadow of a doubt. And so abortion supporters are scared – so scared, in fact, that they have been forced to reject one of their own dogmas – the absolute truthfulness of science.

America has no need for a “health care provider” who ignores the facts, pushes aside science, and blatantly lies to its patients – while insisting that every one of its affiliates must perform abortions. Planned Parenthood’s science is worse than shoddy, and this is just one reason why America doesn’t need Planned Parenthood.

**While Planned Parenthood claims to provide women with a “commonsense” approach, it regularly opposes laws that would protect women in a commonsense way. (Go to this report, to pages 29-30, for more information.)

Editor’s Note: To catch up on our “Why America Doesn’t Need Planned Parenthood” series, check out our first two articles here and here. Come back each Monday, Wednesday, and Friday for the next few weeks to find additional information on why Planned Parenthood is bad for American women, children, and families.