Defenders of Planned Parenthood often argue that the organization is more than just abortions. They provide low-cost medical care for women! They do cancer screenings! And if a woman does have an unplanned pregnancy, then counselors give her all the options!

If only any of that were true. The reality is that Planned Parenthood peddles in lies, manipulation, and misinformation.

Live Action’s Rosa Acuna Project exposed the rampant medical misinformation given to women at clinics around the country. Far from allowing a woman to make an informed choice, our undercover investigations found that counselors lied and used exploitative tactics to convince women to have abortions.

These tactics are blatant violations of the American Medical Association’s principle of informed consent, which says that physicians must give patients accurate medical information. And again, this happens in real life as well – not only in investigations.

A heartbreaking video by pro-life speaker Albany Rose, for example, details how she found out that she was lied to and her records falsified once she was able to get a copy of her abortion records. In Rose’s records, Planned Parenthood lied about her age, saying she was older than she actually was, and lied to her about how far along in the pregnancy she was. They also never gave her the option to see an ultrasound.

Yet, Planned Parenthood lied about providing mammograms. They don’t inform women of the myriad health risks that come with abortion, and they tell them it’s safer than childbirth. Of course, they won’t tell women that if anything does go wrong during the abortion, they’ll let you suffer slowly for hours on end before getting appropriate medical attention – which is what happened to Tonya Reaves. 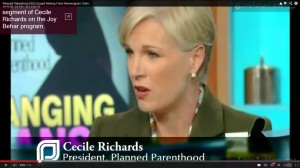 Planned Parenthood fights viciously against laws like the Texas law mandating certain safety standards for abortion providers. They wail about how this will force their clinics to close, leaving low-income women without access to health care – not abortion, but “health care.”

According to Planned Parenthood, they’re an invaluable resource for women needing things like pap smears and cancer screenings. Abortion isn’t their number one priority, remember? That’s the image they want to present to the public. The only problem is that, like everything else Planned Parenthood tells the public, it’s a lie.

Planned Parenthood has actually been losing clinic affiliates because of their national mandate that every clinic must provide abortions. If a Planned Parenthood clinic wanted to just focus on health care for women, they wouldn’t be allowed to. But that’s not the message that gets sent to the general public. We’re consistently told that Planned Parenthood is more than abortion, that they’re women’s health providers. Don’t be fooled. It’s just another lie.

Over and over again, we find that Planned Parenthood lies, manipulates, and misinforms the women they claim to want to protect. American women don’t need that.