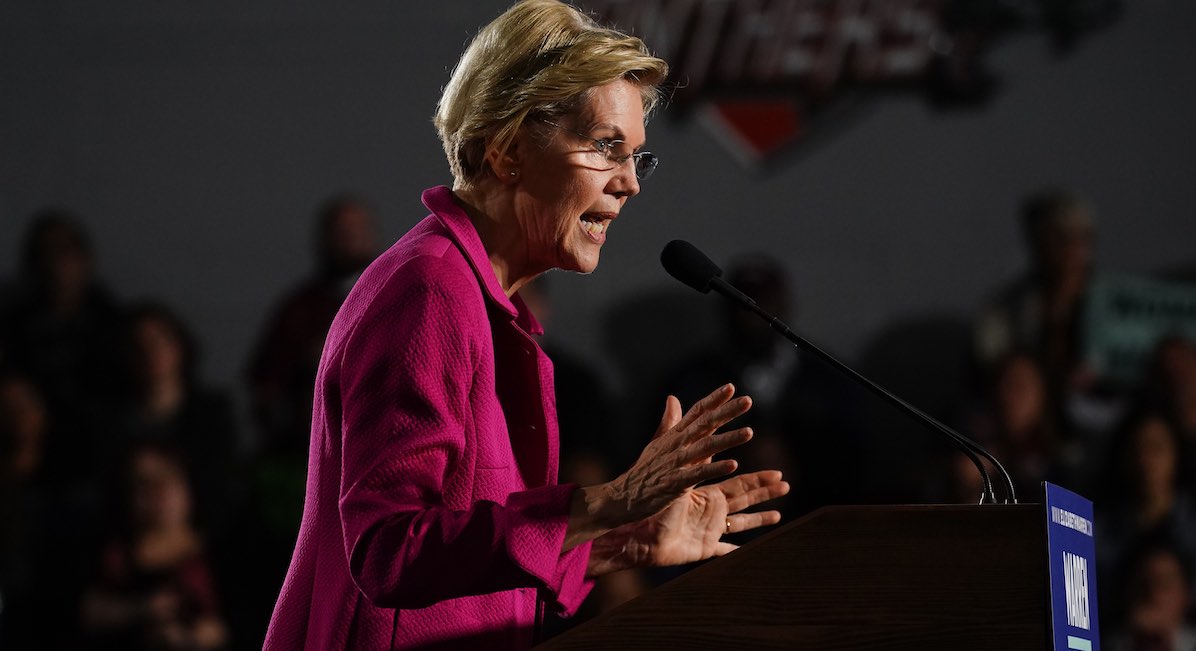 Senator Elizabeth Warren (D-Mass.), along with fellow pro-abortion senators, introduced legislation last week attacking pro-life pregnancy resource centers that have been helping pregnant women with life-affirming options for decades — for free — in communities across the United States and even around the world. This attack reveals the hypocrisy of abortion advocates who both expect pro-lifers to save the world if abortion is outlawed and want to shut down the pro-life centers that are actively helping women facing unplanned pregnancies.

In a tweet, Warren noted that she thinks, “With Roe gone, it’s more important than ever to crack down on so-called ‘crisis pregnancy centers’ that mislead and deceive patients seeking abortion care.” But the question is… why? Is it really because these centers are deceptive when telling women about fetal development, abortion procedures and risks, and offering free ultrasounds and material help? If deception is the issue, why isn’t Warren going after the abortion industry for lying to women and coercing them into abortions (and getting paid to do it)?

Might Warren and her colleagues instead be attacking pregnancy centers because without Roe, abortion businesses may face closure or a decline in patients and income, and they view pregnancy centers as their competition? Shutting down or tying the hands of the centers that provide abortion alternatives will only accomplish one thing: more women will walk through the doors of abortion facilities.

The bill implies mothers are incapable

The bill, the “Stop Anti-Abortion Disinformation Act,” or the “SAD Act” would “direct the Federal Trade Commission to prescribe rules prohibiting disinformation in the advertising of abortion services, and for other purposes.” In the bill, the senators claim abortion is “an essential component of reproductive health care” and that women should have the “freedom to decide whether and when to have a child” because it is “key to the ability of an individual to participate fully in our democracy.”

With Roe gone, it’s more important than ever to crack down on so-called "crisis pregnancy centers" that mislead and deceive patients seeking abortion care. My bill with @SenatorMenendez would stop these harmful practices.https://t.co/kOoa9GWLyk

Women prove every day that mothers are able to both raise children and have a career, or “participate fully in our democracy.” Mothers are allowed to vote, and are capable of voting wisely for both politicians and issues. Mothers can also run for office, attend government meetings, campaign, protest, serve as a juror, serve in the military, and participate in the democracy in any way whether they have one child or 20. Mothers can also have successful careers and implying otherwise is sexist and discriminatory.

The bill goes on to claim that pregnancy centers are “anti-abortion organizations that present themselves as comprehensive reproductive health care providers with the intent of discouraging pregnant people from having abortions.” The senators complain that there are so many pregnancy centers in the United States that they actually outnumber abortion facilities three to one, and claim that the centers use “deceptive tactics” that “prevent people from accessing … time-sensitive abortion.”

While there may be rogue pregnancy centers in existence that have participated in false advertising, the majority of these centers exist for the sole purpose of helping women who are facing unplanned pregnancy. And that help doesn’t stop when the child is born. One example is Pregnancy Center of Rolla in Missouri. Janey was a homeless mother of one young daughter and preborn triplets when PRC of Rolla stepped in to help her and the triplets’ father. They worked with BRIDGES maternity home to give Janey and her children a safe place to live, helped her build a career, and now the family owns their own home and is thriving.

Our medical pregnancy clinic serves client families for five years, providing superior services for anyone who asks. We raised $250K for a mobile medical clinic for underserved areas, treating everyone. Because of people like @SenWarren we now have to hire armed security. https://t.co/1cKPoeEU1I

Likewise, while not all centers have medical personnel on staff or as volunteers, many do, which allows those types of medical pregnancy centers to offer medical services in addition to social services — with doctors, sonographers, and nurses who help the clients with free pregnancy tests, free ultrasounds, accessing necessary prenatal care, and more.

All of the services provided by theses centers are free. Those services range from pregnancy tests, ultrasounds, and STD testing to baby gear, baby and children’s clothing, maternity clothing, diapers, formula, wipes, and even housing assistance. There are also parenting classes and other educational opportunities available, depending on the center and the amount of support it receives from the community.

Pregnancy centers do not charge for services and therefore have nothing to financially or individually gain from a woman who chooses life. One major claim by abortion advocates is that pregnancy centers lie to women by telling them about the connection between abortion and infertility, cancer, and mental health concerns. While there may be conflicting studies on some of these connections, there is research to support the claims that abortion increases a woman’s risk of these health concerns.

There’s a reason why the bill calls abortion “time sensitive”; it’s because the preborn child is growing and developing inside the mother. Only living things can grow and develop. In order to ensure the child’s death as soon as possible, abortion advocateswant to ensure the mother gets to an abortion facility, not a pregnancy center, and abortion industry employees have been known to tell women that if they don’t abort now, the law could change or the abortion could cost more. High-pressure sales tactics are common in the abortion industry.

The bill implies pro-lifers are racist

The senators also accuse pregnancy centers of targeting communities of color that are “under-resourced.” But why wouldn’t an agency offering material resources locate itself in a community most in need of those resources? (Planned Parenthood apparently believes the same about its abortion services, locating its centers heavily in underprivileged communities.)

If one considers that pregnancy centers are working to save babies from abortion in poor communities or communities of color while abortion facilities are trying to abort these babies, which group is more likely to have racist intentions — the organizations offering free help and resources for families in need, or the ones taking money from parents and taxpayers to ensure that the children from underprivileged families are killed? In addition, the abortion industry has been plagued by internal racism from the moment it came into existence right up until recent years.

Lack of accountability in the abortion industry

Finally, the bill states that “People are entitled to honest, accurate, and timely information when seeking reproductive health care.” Pro-lifers agree. Pregnancy centers provide accurate information, but because giving women the facts about fetal development and abortion often leads them to decide to keep their babies. The abortion industry isn’t in the habit of providing women with this information, and it’s not hard to guess why.

While Warren is busy trying to crack down on volunteers who offer women real help, the abortion facilities she admires are injuring women and lying about fetal development. Abortion advocates have presented preborn children as “dots” or have even shown fake images they pretend are embryos. Countless abortion facilities are either not inspected at all or very rarely inspected. For example, abortionist Leroy Carhart is notorious for injuring women, including two whose bodies were so mangled that the emergency hospital staff caring for them after their botched abortions were left traumatized. The women had holes in the uteruses and their babies had been ripped apart but were still inside their bodies.

Warren’s bill appears to be little more than a way to further prop up the abortion industry by scaring women away from the very people who are trying to help them.