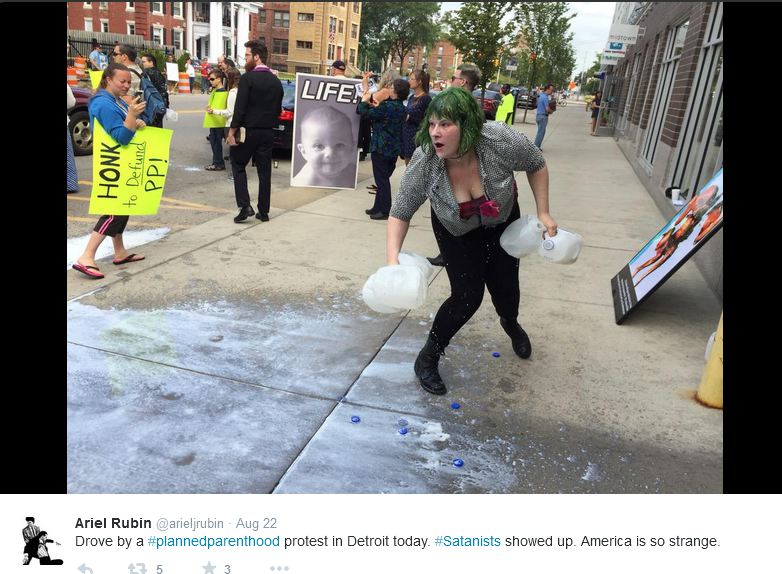 This weekend, when thousands upon thousands of Americans took place in a massive cross-country protest of Planned Parenthood and pro-lifers across the nation lined up in front of their local Planned Parenthoods, PP and even the Detroit satanists tried to use the event to their advantage. Cecile Richards encouraged people to “pledge-a-protestor”(see image below) while protestors from the Satanic Temple of Detroit demonstrated their love for the theatrical and the false: In a shocking act of what they’re calling “political theatre,” the Satanic Temple of Detroit staged a protest in support of Planned Parenthood, during which they symbolically drenched women in milk.

According to the Satanic Temple, this was their way of fighting to end “forced motherhood”:

With wrists bound in prayer, two women were drowned in milk at the hands of male clergy. Their bodies callously veiled by the maternal bath. An American flag furnished with a symbol of The Satanic Temple framed the scene, followed by a message: “AMERICA IS NOT A THEOCRACY. END FORCED MOTHERHOOD.”

… The highly politicized pro-life movement advocates for the abolition of Planned Parenthood, an organization that provides critical preventive and primary reproductive health care services to low-income women. The current cornerstone of their argument stems from a fabricated, fictional story that clinics “sell baby parts for profit”. The August 22nd protest was directly intended to irresponsibly perpetuate this contrived story in an attempt to leverage misunderstanding for political gain and impose the moral opinions of some upon a diverse community.

The Satanic Temple strongly opposes the promotion of misinformation and believes that all people are entitled to make informed decisions about their health, family and future without coercion. We will not remain voiceless when the philosophical and religious opinions of those in power are utilized to legislate morality. The attempt to do so violates American foundational values of freedom and liberty.

If the Satanic Temple strongly opposes misinformation, then perhaps they should stick to facts. They repeat the claim, for example, that Planned Parenthood provides critical preventive and reproductive health care services to low-income women — however, PP’s own annual reports say otherwise, showing that all of these services, with the exception of abortion, have been dropping under Cecile Richards’ leadership. Abortion is Planned Parenthood’s business, plain and simple.

As for forced motherhood, no one is forced to become a mother in this country. Actions do have consequences, though. If a woman chooses to have sex, then she opens the door to the potential for pregnancy. It’s that simple. In the very, very rare cases that a woman becomes pregnant through rape, there is a non-violent way for her to avoid being a mother. It’s called adoption, and there are thousands of couples waiting for the opportunity to adopt a baby.

If the Satanic Temple is really choosing to ignore the overwhelming evidence from the undercover videos released by the Center for Medical Progress, well… there’s nothing that can really be said. You can open someone’s eyes, but you can’t force them to see. Like most abortion advocates, these Satanists are purposely wearing blinders to anything that might force them to see Planned Parenthood negatively. Admitting the reality is likely too horrifying an alternative, because it would mean admitting that they have been supporting an organization that is committing acts of pure evil. And while Satanists may try to frame this as an issue of making the United States into a “theocracy,” religion has nothing to do with any of this. Science and medicine both have indisputably proven the humanity of preborn children.

Undercover investigations, from the current one in the media from the Center of Medical Progress to Live Action’s multiple past investigations, have proven that Planned Parenthood is a criminal, lawless, evil organization that must be defunded, if not forcibly shut down.