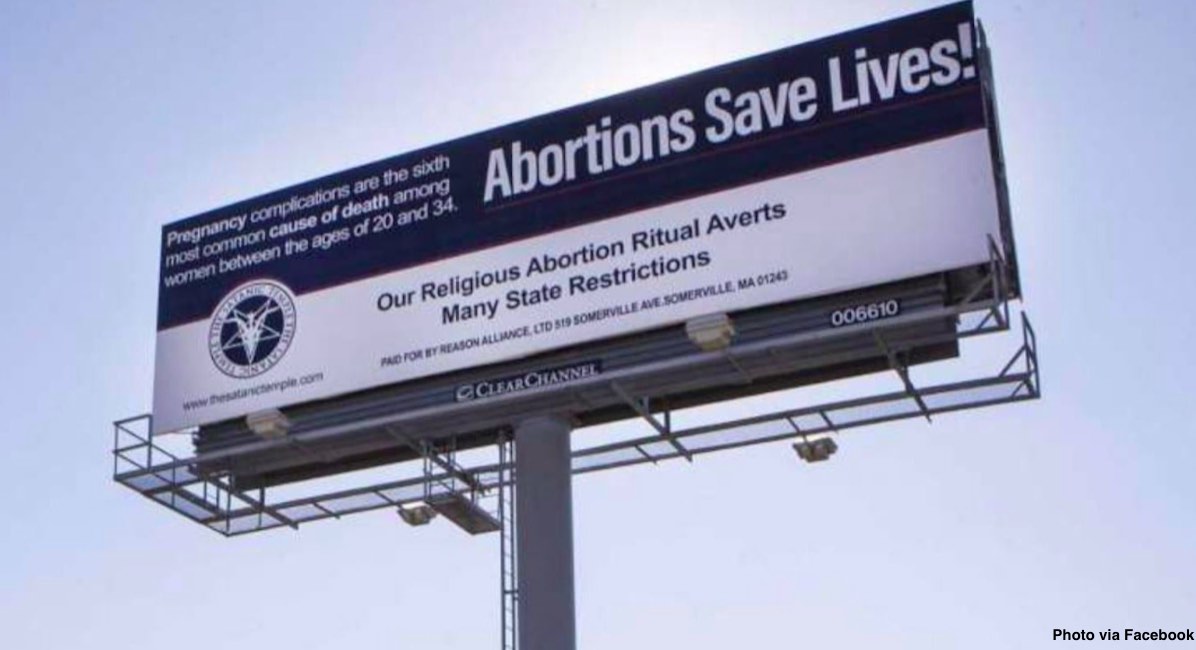 The Satanic Temple is back after a failed attempt to overturn Missouris’ abortion laws, promoting its pro-abortion message on billboards. According to the Houston Chronicle, the Temple erected billboards in Texas and Florida to raise awareness of its purported abortion “rituals” — and also to claim that pregnancy is dangerous.

“Abortions save lives!” the billboard reads in large letters. Underneath, it says, “Our religious abortion ritual averts many state restrictions.” The Satanic Temple’s so-called “abortion ritual” seems to have been created less out of actual spiritual fervor, and more to skirt pro-life laws. During the rite, a Satanist merely recites personal affirmations in the mirror before and after an abortion procedure. And despite claiming that their ritual allows one to get around state laws, the Temple has repeatedly failed to overturn pro-life laws on the basis of religious freedom.

The billboard also claims pregnancy is the sixth leading cause of death among women between the ages of 20 and 34. In rare circumstances, though pregnancy can lead to dangerous complications, the overwhelming majority of women will not suffer injury or death from pregnancy with proper prenatal care. Abortion activists have long claimed abortion is safer than childbirth, but a review of medical research comparing the dangers of childbirth and abortion by Dr. Michael New found that abortion is actually more dangerous.

READ: The Satanic Temple’s fight against Missouri’s abortion law is finally over

“Overall, Reardon and Coleman found very strong evidence that giving birth is in fact safer than obtaining an abortion,” New wrote at National Review. “The mortality rate for the women who gave birth was significantly lower than the mortality rate for women who obtained abortions. This finding was robust as it held true for every time period studied — from one year to ten years after the pregnancy. Overall, during the course of the entire study period, women who had early abortions had mortality rates that were almost 80 percent higher than women who carried their pregnancy to term. Interestingly, women who had late-term abortions had significantly higher mortality rates than those who had abortions earlier in pregnancy.”

OBGYN Dr. Ingrid Skop noted earlier this year, “Abortion numbers, complications, and deaths are voluntarily reported and incomplete. In 2014, the CDC recorded 652,639 abortions, whereas the Guttmacher Institute reported 926,000. Only 28 states require abortionists to report complications and only 12 states require other physicians to report abortion complications. There are no penalties for non-compliance.”

Dr. Skop also noted, “It is estimated that 50% of maternal deaths are not reported as such on death certificates, and the number is undoubtedly much higher for deaths related to abortion. European records-linkage studies documented that 94% of abortion-related deaths were not reported as such on death certificates, and also found that a woman is far more likely to remain alive a year after delivery of a child than after an abortion. Due to legal or ideological motivations, search engine failure to obtain abortion-specific codes, and the failure of many abortionists to maintain hospital admitting privileges or care for their complications, it is likely that most U.S. abortion-related maternal deaths are not reported to the CDC for investigation.”

These Satanic Temple billboards seem to be another publicity stunt in a long line of outrageous acts done in the name of abortion with no concern for actual fact and a heavy emphasis on hyperbole.