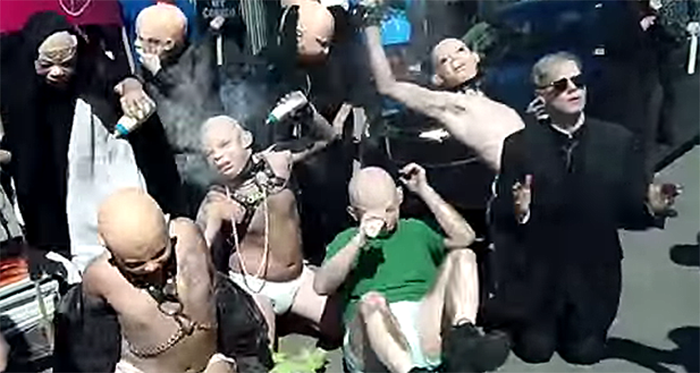 Last week, a nationwide protest of Planned Parenthood was held. As usual, the Satanic Temple of Detroit showed up to counter-protest. Also as usual, they did it in the typical offensive, outrageous fashion that they’ve become known for.

Another video showed the Satanists charging through a group of pro-lifers who were praying and singing, as a priest led a Eucharistic procession with a consecrated host.

This isn’t the first time this group of Satanists have demonstrated their support for Planned Parenthood. Earlier this year, they drenched women in milk to protest “forced motherhood,” and then, in what was perhaps their most offensive protest, had their leader pose in a crown of thorns while carrying a cross on Good Friday.

While The Satanic Temple has consistently engaged in what they call “political theater” to combat the pro-life movement, they have yet to have any discernible success.

For example, they tried — and failed — to overturn Missouri’s 72-hour waiting period law by claiming it violated their religious beliefs, because evidently Satanists literally worship abortion. And while pro-abortion extremists are fans of their stunts, and are enthusiastic about allying with Satanists, such offensive displays are not likely to sway people who are pro-life or support abortion restrictions (which is the majority of Americans).

The obvious goal isn’t to win hearts and minds; it’s to offend people. And on that front, they’re almost certainly succeeding. But whatever their long-term goal may be, some short-term satisfaction isn’t going to help them achieve that when they’re offending the very people they need to be winning over.