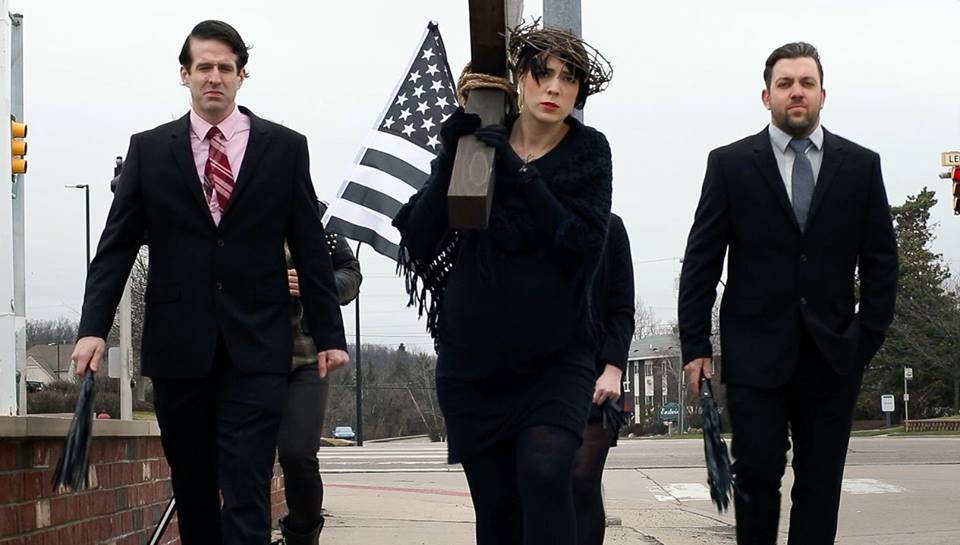 Abortion advocates will go to pretty disturbing extremes to show their support for abortion, but the Satanic Temple of Detroit is fast becoming known for their sickening and offensive stunts aimed at pro-lifers. Their latest protest took place on Good Friday, one of the holiest days on the Christian calendar, where they showed their opposition to pro-life laws by having their leader, Jex Blackmore, pose while wearing a crown of thorns and carrying a cross.

Blackmore and fellow Satanists challenged an annual protest by the Pro-Life Action League outside the Ann Arbor Planned Parenthood, according to the Daily Beast. The Satanists called their action “Sanctions of the Cross.”

Blackmore carried the cross as a symbol of “the burden of oppressive mandates endured by women” along with a fake pregnancy belly, past a group of pro-life protesters — including a priest.

The group’s protest mimicked the Stations of the Cross, a Christian practice meant to commemorate the journey of Jesus to his crucifixion. According to the Bible, Jesus was forced to carry his own cross.

“In the current abortion debate, it’s not the fetus, nor the church that suffers—but women who bear the greatest burden,” Blackmore told the Beast.

On Facebook, they bragged about “crashing” the pro-life event:

Posted by The Satanic Temple – Detroit Chapter on Friday, March 25, 2016

They also posted a video and photos of the stunt: It’s bad enough to make a show of support of abortion on a holy day like Good Friday, but this goes beyond the pale. It’s despicable, not only for its blasphemy, but also for the blatant mocking of the beliefs of others. This would be unacceptable for Christians to do to, say, Muslims, but for some reason, there’s very little outrage garnered when Satanists do something this offensive towards Christians. And do they honestly believe that they’re going to win anyone over by this kind of thing? They’re going to alienate far more people than they’ll gain.

This isn’t the first time Detroit Satanists have gone to ridiculous lengths to show their support for abortion. Last year, they drenched women in milk to protest “forced motherhood” and the “theocracy”. It would be interesting to see how they respond to the many pro-life atheists who are against abortion.

While the Satanists may get attention for their protests, they have yet to have any discernible affect on the abortion debate. Last year was one of the best years for pro-lifers yet, with scores of pro-life laws being passed, and 2016 looks to continue that trend. These extremists can keep going with these protests and displays, but it will continue to be in vain — and it won’t stop pro-lifers from fighting to defend all life.