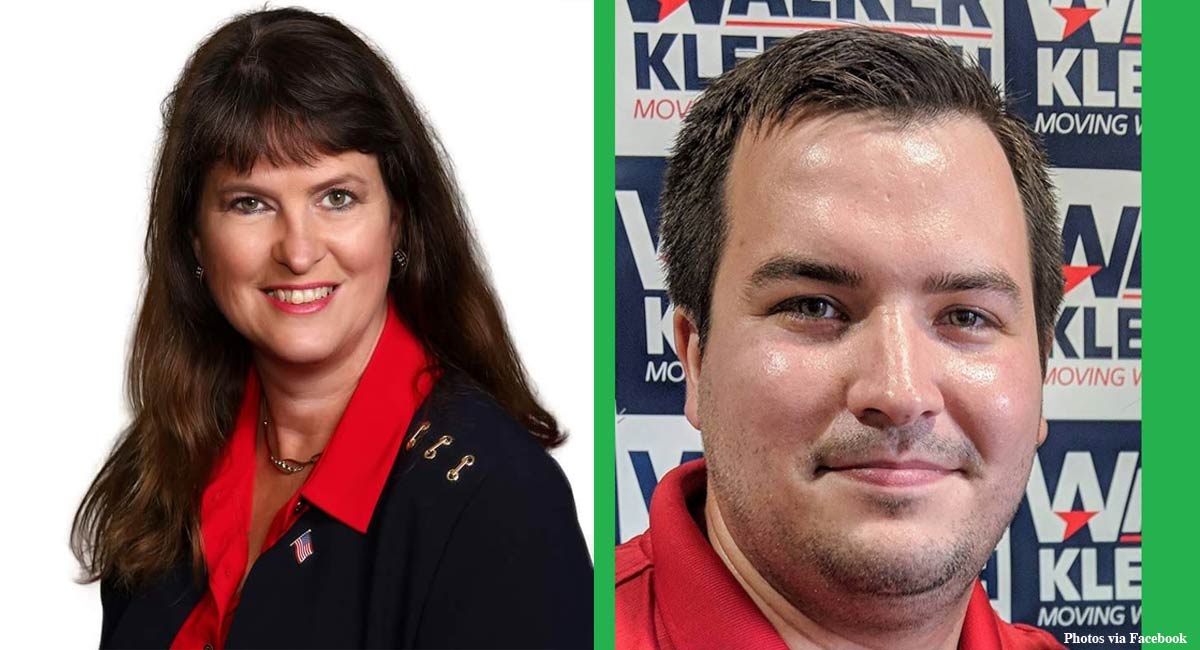 She says she was trying to make a point, but Jill Millies took things much too far when Travis Hartwig, her pro-life opponent for the nomination for Republican State Treasurer in Wisconsin, said abortion should be illegal under all circumstances. Rather than voicing her disagreement, Millies took to Facebook with what Hartwig felt was a threat of rape against his fiancée.

Hartwig had answered a survey question on when abortion should be allowed. He said under no circumstances should abortion be legal. Millies, however, said that abortion should be legal in cases of rape or when “the woman is not mentally stable or in health issues.” She was angered by his answer to that question and to a question about gun control as well.

“Travis keeps making me look better all the time,” she wrote. “So Travis, when your fiancé [sic] gets raped, I hope she keeps the baby & when that mentally ill person shoots you with his 55 magnum or shot gun, but it’ll be ok because he didn’t have to get cleared to carry that gun! Your ways aren’t looking good now, are they?”

Hartwig called Millies’ words “personal threatening attacks” especially since she used the word “when” rather than “if” when referring to his fiancée being raped and him being shot. The comments were deleted and Millies issued an apology the following day.

READ: My son, conceived in rape, is a reminder that love is stronger than hate

She went on to call his supporters “little minions” and said she was “sick and tired” of them. 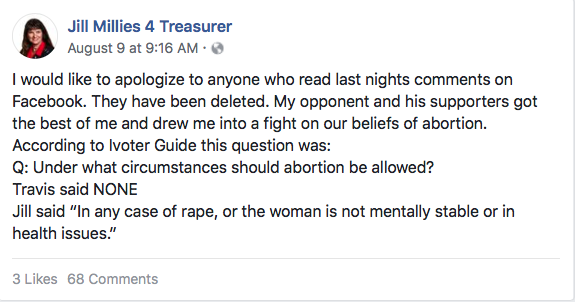 The problem with her original statement and her apology, however, is that Millies is completely misguided. She stated that she hopes Hartwig’s fiancée keeps her baby after a rape — which means she sees a baby conceived in rape as a problem. But human beings conceived in rape are innocent people who deserve their right to life. Hartwig’s pro-life stance would mean that he values that human life unconditionally, unlike Millies.

In addition, Hartwig never said he wouldn’t do anything if a woman was the victim of rape. He said an innocent child shouldn’t die through abortion, he didn’t say he wouldn’t want the rapist punished. Somewhere along the line, abortion supporters — and even some who consider themselves to be pro-life — decided that in order to get justice for a rape, a woman must kill her child conceived during that rape. But abortion doesn’t bring rape survivors closure; it simply creates more victims.

Hartwig said Millies’ behavior is “the absolute gutter of politics.”

Millies believed that Hartwig’s pro-life stance would hinder him from winning the votes during Wisconsin’s primary on August 14, 2018. But the opposite happened. With 87% of precincts reporting, Hartwig was declared the winner with 233,312 votes to Millies’ 89,836.