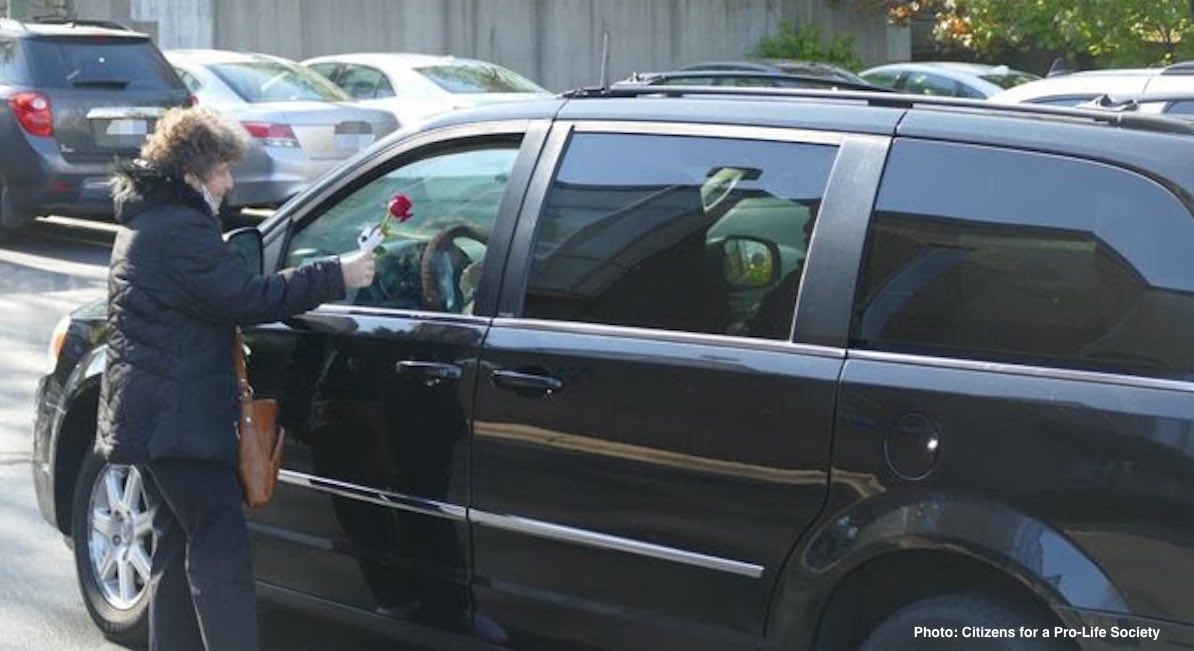 Pro-lifers at abortion businesses in Grand Rapids, Michigan, and Washington, D.C., were arrested this week while attempting to pray and to assist women entering the abortion facilities.

During a Red Rose Rescue outside Heritage Women’s Center in Grand Rapids on May 13, two arrests were made and other pro-life activists were given trespassing citations, according to LifeSiteNews. The rescue was organized by Citizens for a Pro-Life Society, led by Dr. Monica Miller. About 35 pro-lifers were present at the location in total. Some were handing out pamphlets containing information about abortionist Thomas Gordon’s previous civil and health code violations and holding signs showing support for the women.

According to LifeSiteNews, six of the 35 pro-lifers took turns walking to the parking lot and offering women help. Boyfriends and husbands were present with the women and one told Miller that “there was something wrong with the baby” and that abortion was “the only choice”—a sentiment many believe when faced with a difficult diagnosis. Miller had reportedly entered the facility early in the morning, but otherwise the pro-lifers remained outside the business.

While the pro-lifers were peacefully praying and offering assistance, Dr. Gordon confronted them and began yelling and threatening to kill pro-life activist Ann Norton. “‘If you don’t get off my property’ – and then he put his hands in the shape of a gun – ‘then I’m going to shoot you,'” Norton recalled.

Police arrived and informed pro-lifers that they were trespassing, but they continued to offer help to women arriving at the facility, giving them red roses with encouraging words and the phone numbers of local pregnancy help centers.

Police again arrived to warn the pro-lifers that they were trespassing. Monica Miller told Live Action News what happened next:

Two police officers showed up and placed myself, Robert Kolavy and Matthew Connolly in their police vans. Robert and I were together and Matthew was in a separate police van. Robert and I were issued citations [for trespassing] and quickly released. Matthew Connolly oddly was only asked a few questions and not charged with anything — no citation for him.

Those officers then left, but different officers returned a short time later and told the pro-lifers that the driveway must remain clear. The officers then parked in a nearby lot. Minutes later, police returned and handcuffed and patted down Heather Idoni who had just approached a woman in the parking lot. Fellow pro-lifer Caroline Davis was also arrested, and according to Miller, Ann Norton also received a citation. Miller told Live Action News:

… Heather Idoni and Caroline Davis were actually taken into police custody, [were] cuffed, and taken to the Kent County jail for processing. They were released within 2 hours on their own recognizance.  We don’t know why the police changed their procedure with them, but the charge is the same as the rest of us.

Idoni and Davis were released at 1:00 p.m on a $500 personal recognizance bond. They will appear with other rescuers at the 61st District Court on May 20. Neither Idoni or Davis was individually warned before they were arrested. Miller told Live Action News, “We are waiting to hear from the 61st District court by mail for our first court date and we will all enter a plea of not guilty.”

About half the number of women who usually are present for abortions were at Heritage Women’s Center that day, perhaps because the presence of the pro-lifers gave them second thoughts.

Pro-life activists at both locations were giving mothers roses and encouraging them to choose life for their preborn children. The activists were wearing masks due to COVID-19 and were arrested when they refused to leave.

“Rarely if ever do pro-lifers pray or counsel in front of these facilities because, the offices being hidden in multi-unit buildings, pro-lifers cannot normally access or identify the women entering the building as pregnant moms in crisis,” he told LifeSiteNews. “Thus we enter the buildings and counsel the women in the waiting rooms or in the halls outside the waiting rooms of these abortionists. Many babies have been saved in past Red Roses Rescues in these facilities – babies that otherwise would have died.”

Activists claim at least one baby was saved, that they are aware of, through their efforts.