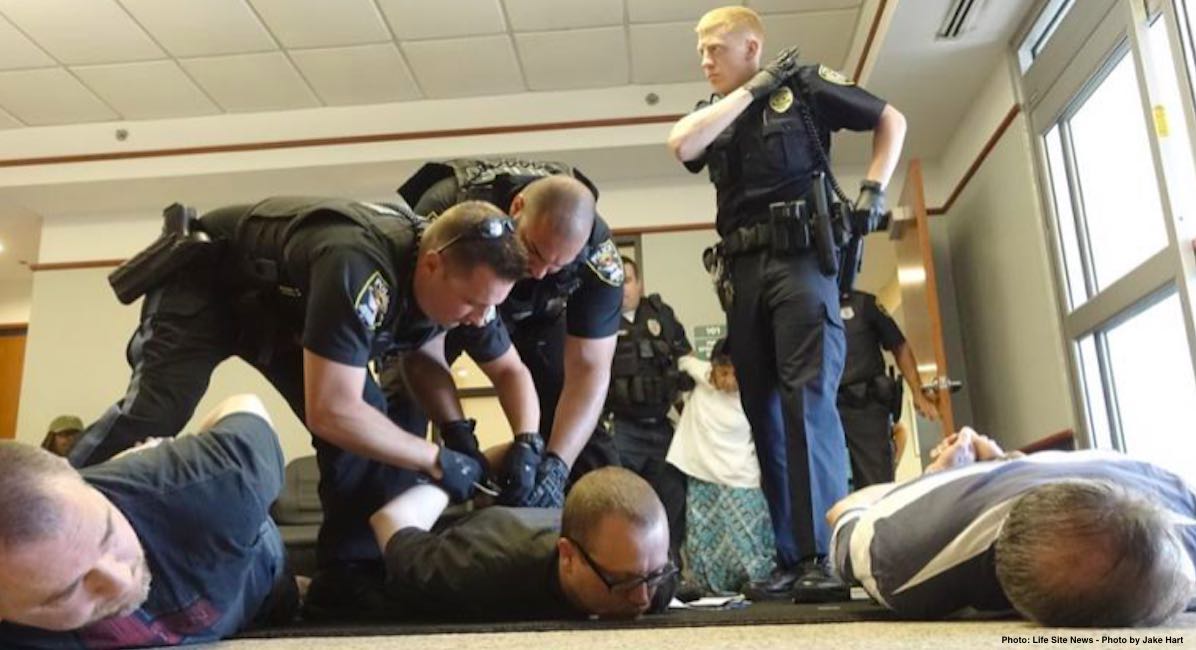 (Life Site News) Two Catholic priests and two lay pro-life activists were arrested this morning for entering and refusing to leave an abortion facility, offering red roses to the women inside and encouraging them to choose life.

At least one woman turned away and didn’t go through with an abortion, Red Rose Rescue spokeswoman Lisa Hart told LifeSiteNews. The woman’s mother was forcing her to have the abortion.

“I was in the process of trying to get her [the] number of an attorney to call…I gave her some good information to get help and offered to take her to my house, actually, but her mother came up and started yelling at me,” Hart recounted. She told LifeSiteNews that over 10 police cars came to the scene and the pro-lifers “were dragged off into” them.

“When we tried to film it, they forced us to get off the property,” she said. The pro-lifers managed to get short videos of police carrying some of the arrested rescuers to their cars. The activists are now at the police station, Hart said.

The abortion facility the pro-lifers entered is Garden State Gynecology, which is on the first floor of a large office building that also houses New Jersey’s “premier” freestanding birth center. This is the 14th Red Rose Rescue that’s taken place in the United States since September 2017.

“The Rescue that we did in September was on the feast of St. Michael, dedicated to him. Then, the December Rescue was close to Christmas. We dedicated it to Our Lord and His birth. The March Rescue was on the 19th, dedicated to St. Joseph,” Father Fidelis Moscinski of the Franciscan Friars of the Renewal told LifeSiteNews. This morning’s Rescue was “dedicated to the Immaculate Heart of Mary” because July 13 is “the anniversary of when she revealed the secret at Fatima,” he said, referring to Marian apparitions in Fatima, Portugal when the Blessed Virgin Mary appeared to three peasant children and warned them of the need for prayer and reparation for sin.

Accompanying Moscinski, who has participated in several previous Red Rose Rescues, were two other veteran rescuers, Father Dave Nix and Will Goodman. A fourth rescuer entered anonymously in solidarity with unnamed babies in the womb.

“We’re really calling upon the intercession of the Immaculate Heart of Mary this morning,” said Moscinski. “We are trusting in the power of God’s grace to affect people’s minds and hearts.”

This is the first Red Rose Rescue at this location.

The priest told LifeSiteNews he’s been informed there is likely a warrant out for his arrest because he and Goodman refused to pay a $364 fine after being convicted of “defiant trespass” for the September 29 Red Rose Rescue at a Montclair, New Jersey abortion center. That could impact how long they’re detained, he said, noting he has no way of knowing how long they would potentially be jailed.

He also pointed out the irony of an abortion facility and a birth center sharing a building.

“Apparently, mothers who are choosing to give birth receive some assistance and help there and it’s the same building as they’re killing the children,” said Moscinski.

“The Red Rose Rescue is an act of charity for women who feel for whatever reason they must have their innocent unborn children killed,” explained Hart. “We … go into the very places where the unborn are put to death and extend help to the moms.”

The pro-lifers “remain [there] in solidarity with the helpless victims oppressed by the injustice of abortion.”

The Red Rose Rescues are inspired by Canadian activist Mary Wagner and are somewhat of a revival of a tactic used during the dawn of the post–Roe v. Wade pro-life movement. Pro-lifers frequently chained themselves to abortion equipment and blocked entrances to abortion centers, saving many babies. Former president Bill Clinton’s signing into law the Freedom of Access to Clinic Entrances (FACE) Act allowed for much stricter punishment of those who block abortion center entryways, forcing the pro-life movement to change methods.

No Red Rose Rescue participants have been charged under FACE, and federal charges against pro-lifers in Washington, D.C. have twice been dropped. A number of Rescuers have been jailed, though.

Moscinski told LifeSiteNews one of the Garden State Gynecology abortionists is Eric Yahav, who is alleged to have attempted to force his girlfriend to have an abortion in December 2015. The girlfriend obtained a court order of protection.

The red roses distributed inside the abortion center today had attached to them a message that said: “You were made to love and to be loved…your goodness is greater than the difficulties of your situation. Circumstances in life change. A new life, however tiny, brings the promise of unrepeatable joy.”

Editor’s Note: This article was published at LifeSiteNews and is reprinted here with permission.