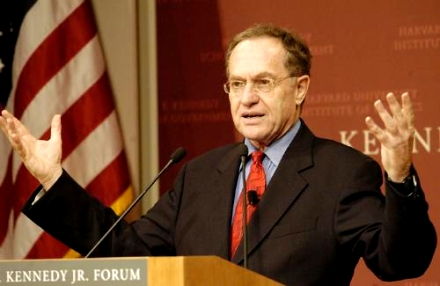 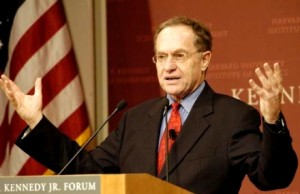 Alan Dershowitz is not only one of the country’s most prolific legal commentators, he’s also one of the few to gain fans on both sides of the aisle. That’s because, despite being a self-professed liberal, Dershowitz exercises greater objectivity than most of his ideological brethren.

And he recently displayed that objectivity on CNBC. On Monday, he told Larry Kudlow:

I can’t find anything in the Constitution that says you prefer the life of the mother, or the convenience of the mother if it’s an abortion by choice, over the potential life of the fetus. Look, I think women if they’re required to not have abortions could die and could — so I favor a woman’s right to choose. But I can’t find it in the Constitution. And everything I favor I don’t think is necessarily constitutionally based.

As a policy matter, Dershowitz is tragically wrong – the fetus’s life is actual, not potential, and pro-life principles do not mean that women must continue truly life-threatening pregnancies – but it’s refreshing that he refrains from using judicial malpractice to get what he wants.

This isn’t the first time Dershowitz has made this point; in 2001, he wrote that “clear governing constitutional principles” were “not present” in Roe v. Wade, and that “[j]udges have no special competence, qualifications, or mandate to decide between equally compelling moral claims (as in the abortion controversy),” making abortion an issue “more appropriately left to the political process.”

Indeed. Whenever the Constitution mentions the central “right” Roe hinges on, privacy, it can’t even be remotely construed as applicable to abortion. And the rest of the ruling makes a mockery of logic, law, history, and science:

First, the Constitution doesn’t define person, but the Constitution doesn’t define privacy either. The Supreme Court applied a double standard in Roe, arbitrarily giving the word person a narrow definition and the word privacy a broad definition in order to rationalize its decision to legalize abortion-on-demand. Second, if a fetus isn’t a person because the provisions of the Constitution don’t apply to a fetus, then infants aren’t persons either, because the provisions also don’t apply to infants. Or adolescents in some instances. Third, it’s irrelevant if state abortion laws were less restrictive in the past. Many laws were less restrictive in the past. And it’s irrelevant if state abortion laws originate from statutes not common-law. Many laws originate from statutes. Fourth, when the Fourteenth Amendment was adopted in 1868, abortion was already restricted by at least 36 laws enacted by state or territorial legislatures, including the very Texas law the Supreme Court struck down in Roe. Or in other words, state or territorial laws restricting abortion were already recognized when the Fourteenth Amendment was adopted: the Amendment wasn’t intended to overturn laws restricting abortion […]

The Court deliberately ignored the facts and misled the public. First, the question of when human life begins is neither one of philosophy nor theology; the question is one of science. Second, the medical community had already arrived at the consensus that human life begins at conception. In October 1971, a group of medical experts filed a brief of amicus curiae (advice to a court from a person or persons not a party to the case) to the Supreme Court. The brief showed conclusively that science (embryology, fetology, genetics, perinatology, all of biology) establishes that human life begins at conception. And not a single person or group refuted the brief.

Alan Dershowitz deserves credit for distinguishing between his policy goals and the tactics used to pursue them. We’ll still have to work to help him see the light, but his unwillingness to lie about the law is a good sign that the truth already has a foot in the door.