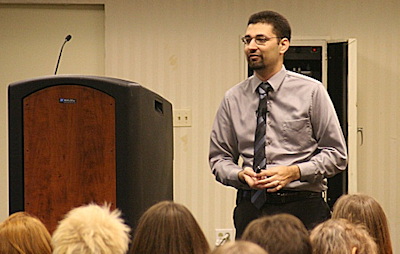 Josh Brahm is the Director of Education for Right to Life of Central CA’s Fresno office and host of the globally-heard podcast: “Life Report: Pro-Life Talk. Real World Answers.”

Student: What is your view on abortion?

Josh Brahm: I believe that elective abortion is immoral and should be illegal because it unjustly takes the life of an intrinsically valuable human being.

If someone asked you to perform an abortion, under what circumstances would you agree to do it (assuming you are certified to carry out an abortion)?

If a mother had a life-threatening pregnancy that needed to be ended within the first trimester in order to save her life, and there was no way to save both mother and child, I would be willing to help end the pregnancy, although the type of procedure I’d use might be very specific.*

The most common case of life-threatening pregnancy in the first trimester is an ectopic pregnancy, where the embryo implants somewhere other than the uterus, usually inside one of the fallopian tubes. This is a very dangerous situation because fallopian tubes are not designed to facilitate a full-grown baby, so at some point, as the embryo grows, the tube will burst, the embryo will immediately die, and the mother’s life will be at risk due to internal bleeding. Even the Catholic Church agrees that it is morally permissible to intervene in this case and end the pregnancy before the tube bursts. They use Double Effect Reasoning to demonstrate their case. Because your goal is to save the mother’s life and not to kill the embryo, the surgery is permissible, even though the embryo will die as a result of the surgery.

By the way, most people don’t call this an “abortion” because they want to distinguish between a salpingectomy and an elective abortion, but whatever you want to call it, I believe that salpingectomy is morally justifiable, and I would be willing to carry it out myself, knowing full well that the embryo that will die very soon after the procedure is a valuable human being, who got stuck in the wrong place.

When is a baby able to feel pain?

This is a hotly debated topic. The most important point to make is one that Steve Wagner from Justice for All makes in this article: it really doesn’t matter when babies are able to feel pain, because my pro-life case does not depend on babies feeling pain. My argument is not that “abortion tortures babies to death, torture is wrong, thus abortion is wrong.” My argument is that the unborn are full human beings, abortion kills the unborn, killing human beings without proper justification is wrong, thus abortion is wrong.

After all, some babies are born without the ability to feel pain. Their nervous systems do not work properly. When they grow up they will need to be very careful around hot stoves, as they could injure their body and not even know it. Would it be morally permissible to kill such a person just because he won’t feel the pain of being shot or stabbed? Of course not, because that person is a valuable human being like you and me. So even if the unborn do not feel pain in the first trimester, when most abortions are performed, that doesn’t say anything about the rightness or wrongness of abortion.

Based on the current research, I suspect that babies younger than 16 weeks do not feel pain, and that they may not feel pain until as late as 20 weeks. If that is true, then 99% of abortions are done on babies that don’t feel a thing. There is more research that needs to be done on this subject, and it’s possible that younger babies can feel pain. Either way, pro-life advocates need to be very careful not to ground our pro-life argument on the idea that babies feel pain during abortions.

Do you feel like medical abortions are humane? Why or why not?

It depends on what you mean by “humane.” If a pro-lifer argued that abortions are “inhumane” simply because he believed that first-trimester babies feel pain, then I would not agree with his case. But if by “humane” a broader definition is being used, like “characterized by tenderness, compassion, and sympathy for people,” then I believe both pro-life and pro-choice advocates are often operating from the desire to be humane.

Pro-lifers are obviously humane because they feel compassion for the babies being killed, and usually they also have compassion for the pregnant women who often feel like they have no choice but abortion. That’s why there are so many Pregnancy Care Centers that provide free help to these women. It’s not just to save babies. It’s because they care about the women, too. They also provide free counseling for post-abortive men and women.

On the other hand, I think many pro-choice people feel compassion for pregnant women, and they don’t think abortion kills a valuable human being, so they are pro-choice. I think their compassion is admirable, and I share it, but I think they’re wrong about the moral status of the unborn. That’s what I think both sides need to be debating. The answer to the question of the humanity of the unborn is the first thing we must know before determining the rightness or wrongness of elective abortions.

How would you define injustice?

Injustice is the quality or fact of being unjust, which usually means violating the rights of another. For example, slavery was unjust because it infringed on the natural rights of black human beings to have liberty and be treated with dignity and respect. I believe that abortion is unjust because it infringes on the unborn child’s natural right to live. If the right to life is meaningless, then all other rights are meaningless as well.

But I don’t believe that all living creatures have a natural right to live. I think that’s true only of human beings. So once again, the ultimate question is whether or not the unborn are human beings. If they are, then elective abortion, by definition, is unjust. And that brings us to your next question…

Is the fetus a human life?

Here’s what we know about the fetus from the science of embryology: by the time the fertilization process is complete, what results is a biologically living, whole human being. We know the embryo is biologically alive because she is growing, metabolizing food into energy, and reacting to stimuli. Those are things biologists look for when they are trying to determine if an entity is biologically alive. The embryo does all three.

We know the embryo is human, because she has human parents. It is scientifically impossible for two humans to reproduce a non-human. No, what results will be another member of their species, homo sapiens.

So the fetus is human, and it is alive. I don’t know what else to call that besides “human life.”

All murders are an act of killing, but not all acts of killing are murder. The word “murder” means something very specific, at least in U.S. legal terminology. It means “the unlawful killing of another human being without justification or excuse.” Right now, elective abortion is legal in the U.S., which I believe is something that needs to end, the same way legalized slavery needed to end 150 years ago. But because abortion is currently legal, by definition it is not murder, even though it is killing. If abortion becomes illegal, then abortion will be both killing and murder.

When do you think the fetus becomes a “human” to people? When it begins to look like one?

It’s important to note that while there are many varying opinions about when personhood begins, that does not mean that there are no right answers. As Hadley Arkes says, “the absence of consensus does not equal the absence of truth.” People used to have varying opinions on whether the earth was flat or not, but it doesn’t follow that there were no right answers.

I think the scientific and philosophic arguments for the unborn being fully human from the beginning of their life, as opposed to some point later in life, have much more explanatory power than pro-choice arguments. I want people to examine the best arguments both sides have to offer because I think that the more you do, the more likely you are to become pro-life after fairly weighing the evidence.

Is it morally right in any way to have an abortion?

Because the unborn are human beings, and because human beings have certain obligations towards each other, I don’t believe that any elective abortion is morally permissible. I do believe that life-threatening pregnancies where both cannot be saved can be ended, even if the life-saving procedure results in the baby being unable to live.

Is it legally right in any way to have an abortion?

But some acts are so wrong in the way they infringe on other people’s rights that they should be illegal. If abortion does kill a human being, then that should settle whether abortion should be legal or not. Why have laws against infanticide (killing young babies post-birth), but not have laws against killing that same baby before birth? That doesn’t make sense, as two pro-choice Australian philosophers recently observed, making headlines across the globe.

Notice a common theme here. The first question that must be answered in every philosophical question about the ethics of abortion is whether or not the unborn are fully human, the way you and I are. As Greg Koukl at Stand to Reason says: