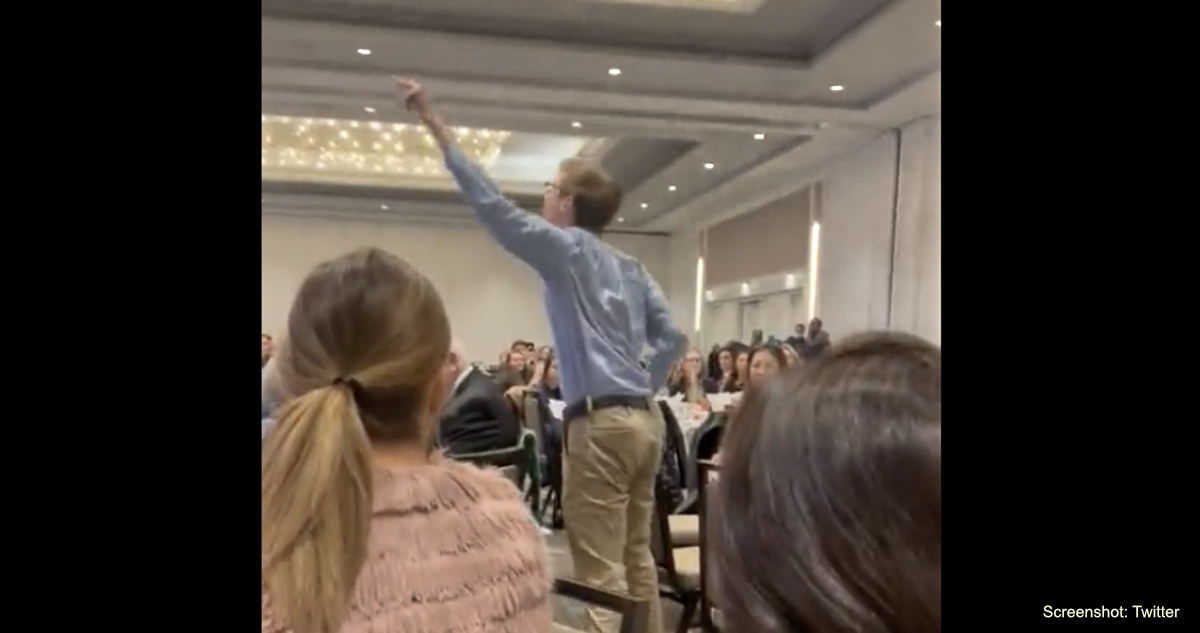 Numerous pro-abortion protestors disrupted Capitol Hill Pregnancy Center’s fundraising banquet on December 1 in Washington D.C., each taking a turn shouting and cursing at the pro-lifers present at the event. Protestors were also present outside the venue. One man claiming to be a protester at the event said he was there with the group Shut Down DC.

WORLD magazine reporter Carolina Lumetta shared videos on Twitter from both inside and outside of the event. Protestors outside shone a lights display on the banquet venue that read, “Respect existence or expect resistance.”

Inside the venue, one woman stood up as the center’s Executive Director Janet Durig was speaking and screamed, “[…] You are judging those that are attempting to receive medical health care. That is all on your f***ing hands every last mother f***ing one of you f***ing a******s. Yeah! Blood on your hands! Jane says revenge, mother f***ers! Blood on your hands!” She concluded her rant with, “Abortion forever!”

As she was escorted out of the building, the man who had been seated next to her at a banquet table stood up and began shouting.

Then a second man standing in the back of the room with a recording device, who appears to have revealed himself on Twitter as Vincent Vertuccio, began shouting, “We will always aid and abet abortion. This clinic has got blood on its hands. You know that you have blood on your hands. You don’t give a f*** about pregnant people. You don’t fix any systemic issues…”

After this, a fourth woman walked through the room, accusing the pro-lifers of “killing children.”

He added, “The people that attack reproductive healthcare, welcome fascists with open arms, and expect to dine in peace while ripping our rights from us don’t deserve a minute of peace until they stop their attacks on our communities. I was proud to disrupt their banquet.”

He failed to mention that the D&E abortion procedure dismembers children in the second trimester of pregnancy.

Pro-life author Chelsea Patterson Sobolik tweeted, “At the Capitol Hill Pregnancy Center banquet tonight and three protestors interrupted the executive director while she was speaking. They were sitting at a table with a mother & her baby. The same mother who, just a few minutes later, got up on stage & bravely shared her story.”

She added, “About 30 minutes later, four more protestors yelled and interrupted again. The center has been sharing stories all evening about ways they care… holistically for women, children and families. And how they seek to support them. Truly heartbreaking.”

Researcher and writer Michael New explained on Twitter that the pro-abortion protestors interrupted the event a total of six times. In an email to Live Action News he explained, “The protestors actually attended the event and enjoyed a free dinner. There was one set of disruptions when Janet Durig, the Executive Director of the Capitol Hill Pregnancy Center began her remarks. There was another set of disruptions after attendees viewed some recorded remarks by Erin Morrow Hawley, the wife of Senator Josh Hawley, and a lawyer for Alliance Defending Freedom.” Hawley was a member of the legal team behind on Dobbs v. Jackson Women’s Health Organization — the case that took down Roe v. Wade.

Not once
Not twice
Not 3 times
Not 4 times
Not 5 times
But 6 times, by obnoxious pro-abortion protesters

Pro-lifers, have the last laugh!
I pledged $10 for each disruption
Please do the same!https://t.co/0sucUOT1R0

New continued, “In my opinion, the banquet disruptors were petty, juvenile, and obnoxious. Supporters of legal abortion claim to support ‘choice.’ However, if the protesters were really in favor of choice they would be supporting the Capitol Hill Pregnancy Center which has been offering real choices to DC area pregnant women for years.”

Christina Herrera, a Live Action ambassador, was in attendance and also posted videos on Twitter showing the pro-abortion protestors screaming before being escorted out.

Durig spoke with Live Action News about the incident, saying, “It wasn’t pleasant. It wasn’t nice to have. But it’s evidently where we are in today’s society which is very sad.” She explained that she had hired security for the night including a security guard and six police officers, who were able to remove the protestors quickly.

“It was a disturbance, but it didn’t deter anything. The show went on so to speak, and I’ve gotten a lot of compliments and emails that it was disgusting, but that it was handled well,” she explained.

In June, Capitol Hill Pregnancy Center was vandalized by pro-abortion protestors, just weeks ahead of the Supreme Court’s ruling to overturn Roe v. Wade. Red paint was thrown on the door to the building and the words “JANE SAYS REVENGE” was spray-painted on the side of the building along with what looked to be the symbol of anarchy in place of the “A” in Jane. The center hired security guards following the attack.

A couple of weeks ago, students from Georgetown University arrived to protest outside of the center, and Durig went out to meet them. She told Live Action News that she invited them inside to see what the center does and while the majority didn’t respond to her, one of the men present shook her hand and thanked her for coming out. After two of the female student protestors spoke to her, she again invited them inside. They refused, but as Durig walked back into the building, she overheard one of the men tell the girls, “That lady gave you an opportunity and you’re missing it.”

A few minutes later the two girls knocked on the door and Durig gave them a tour of the center, beginning with the clothing they have for children up to size 4T and the brand new layettes that they give the mothers, so the baby has a special outfit to wear home from the hospital. The girls seemed interested, said Durig. She added, “One girl said, ‘But if you don’t talk bad about abortion, if you don’t judge them for abortion, as you say, don’t you then support abortion?’ And I said, ‘No, not at all. I think abortion is truly taking a life. You don’t think it takes a life. I think it takes a life. But we do not coerce anyone. We don’t try to make them believe what we believe. We offer them alternatives, but we ask permission for everything.'”

Pro-abortion protestors are rare at the center, according to Durig, but she thinks what drew them to the banquet was that Hawley, wife of Senator Josh Hawley, was scheduled to speak at the event. At the last minute, she was unable to attend, and instead a recording of her speech was played.

Hawley’s involvement could have been a part of what led the protestors to the event as Vertuccio tweeted, “This banquet not only served to boost a fake clinic that misleads and lies to at-risk pregnant people in DC, but also welcomed Erin Hawley, wife of fascist US Senator Josh Hawley.” Other pro-abortion Twitter users made additional inappropriate and inaccurate comments regarding Hawley, including Shut Down DC and Our Rights DC.

Erin Hawley works for 2 hateful organizations that work to oppress women, girls, all pregnant ppl, and queer folks. She personally had a hand in the overturning of #RoeVWade https://t.co/nyLmq8lElg https://t.co/kmt2JfFUx7 No wonder she’s married to Josh @hawleymo.

In a statement, ADF Senior Counsel Kevin Theriot told Live Action News, “The abortion industry has convinced these individuals of the lie that they ‘need’ abortion, when women are fully capable of being moms and living successful lives. Pregnancy centers are there to provide for their medical, material, and emotional needs, while abortion businesses prey on their desperation and try to convince them that abortion is their only option. Pro-life ministries, churches, and centers have been firebombed, vandalized, and threatened—all because they won’t condone the violent act of abortion. We hope more and more Americans will realize that life is a human right and that women and families facing unplanned pregnancies deserve real support.”

FBI Director Christopher Wray told the Senate Homeland Security Committee in November that about 70% of abortion-related violence and threats since the overturning of Roe v. Wade have been carried out against pro-life groups.

Editor’s Note: This article will be updated as more information becomes available.