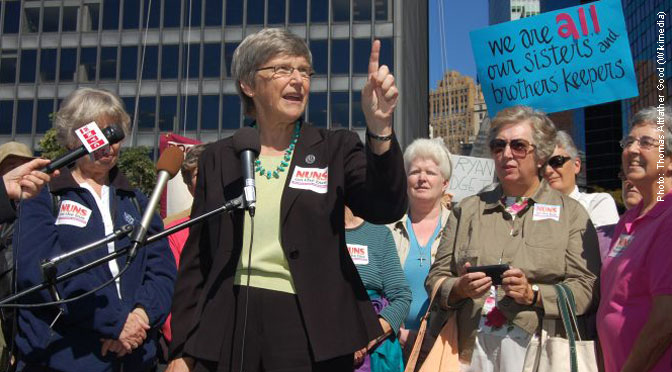 As Live Action News covered, NARAL president Ilyse Hogue received thunderous approval from the Democrat National Convention last week for a speech that included discussing her own abortion. Now her speech is getting rave reviews from a Catholic nun with a reputation for defying her church’s pro-life teachings.

“I wanted a family, but it was the wrong time,” Hogue said. “I made the decision that was best for me to have an abortion and get compassionate care at a clinic in my own community.”

“I think what was touching and compelling was her speaking of her reality,” Sister Simone Campbell told the “Democracy Now!” show, “and saying that it is not, you know, the bad girls. It’s all women that have this struggle.”

Campbell went on to say “I don’t think it’s a good policy to outlaw abortion. Rather, let’s focus on economic development for women.” She also repeated the popular pro-abortion attack that pro-lifers are “really only pro-birth” because they tend not to support a variety of controversial, government-focused economic policies.

Despite Campbell’s position, her Catholic Church teaches that the “moral evil” of abortion is an “unchangeable” teaching and that “Formal cooperation in an abortion constitutes a grave offense” carrying the “canonical penalty of excommunication.”