The term “pregnancy” is trending on Twitter following a tweet from Senator Ted Cruz which stated, “Pregnancy is not a life-threatening illness, and the abortion pill does not cure or prevent any disease. Make no mistake, Mifeprex is a dangerous pill.” Pro-abortion media has seized upon his remarks, citing biased sources in an attempt to disprove Cruz, who just this week led a call for the Food and Drug Administration (FDA) to ban the abortion pill, mifepristone (brand name Mifeprex), from the U.S. market.

Here are the facts, and they’re not in the media’s favor.

CBS News reporter Kate Smith previously claimed that the phrase late-term abortion is “non-medical” and “violent rhetoric.” Smith also conducted a softball interview with Planned Parenthood’s recently-appointed president, who misleadingly stated that abortions only account for three percent of Planned Parenthood’s services, a claim that was debunked by the Washington Post years ago.

In response to Senator Cruz, Smith tweeted: “This is why pregnancy is trending on Twitter today. Here’s the risk of death for both abortion vs pregnancy: –> Abortion: less than 0.6 per 100,000 –> Pregnancy: 7.1 for per 100,000 Of course pregnancy isn’t a disease, but for some it’s a life threatening condition.” 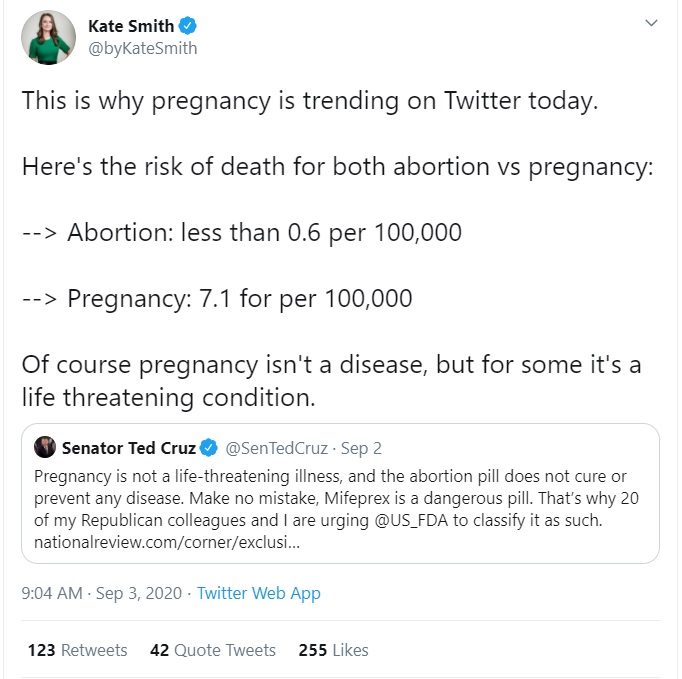 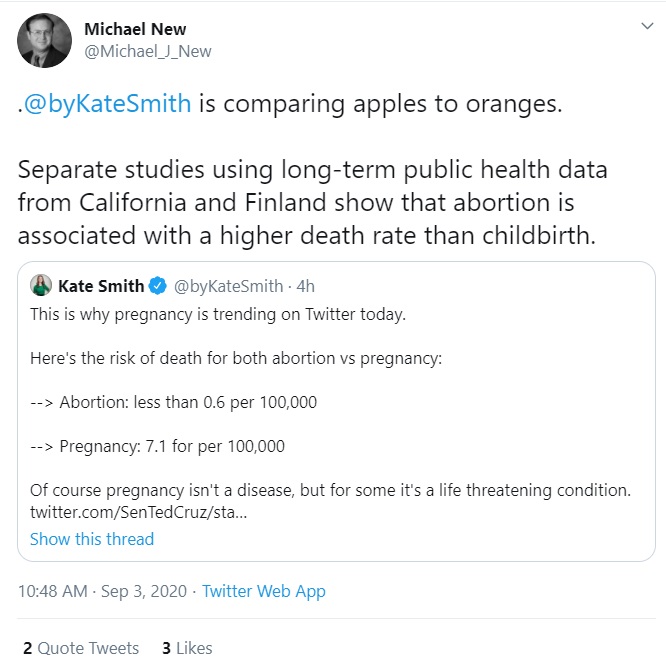 While Smith claimed that the risk of death from abortion was just 0.6 per 100,000 women, a study from Finland found, “The age-adjusted mortality rate for women during pregnancy and within 1 year of pregnancy termination was 36.7 deaths per 100,000 pregnancies.”

A study that reviewed California Medicaid records for 173,279 women who compared induced abortions to deliveries concluded that “[h]igher death rates associated with abortion persist over time and across socioeconomic boundaries. This may be explained by self-destructive tendencies, depression, and other unhealthy behavior aggravated by the abortion experience.”

A 2012 study which used comprehensive public-health long-term data from Denmark to analyze mortality rates for nearly half a million women found “very strong evidence that giving birth is in fact safer than obtaining an abortion,” according to a review of the findings by Dr. New.

Senator Cruz quickly called out Newsweek, tweeting, “Want to know how fake news happens? This is a textbook example. Newsweek reports “Cruz has faced a backlash” for my FDA letter defending women & unborn children. Their evidence? 1 tweet from a Dem candidate & 3 quotes from pro-abortion lobbyists. Voila!” 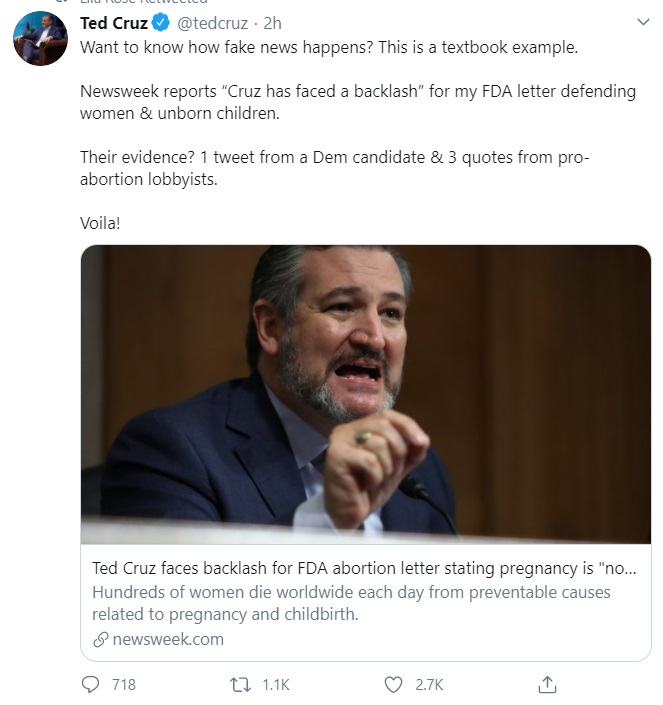 Newsweek cited a National Academies of Sciences, Engineering and Medicine (NASEM) report from 2018, claiming abortion is safe and effective. Newsweek claimed, “the risk of death subsequent to a legal abortion (0.7 per 100,000) is a small fraction of that for childbirth (8.8 per 100,000).”

But this report was actually sponsored in part by foundations with possible profit motives (a massive conflict of interest), namely Warren Buffett (the Buffett Foundation) and the Packard Foundation. Packard helped to finance the startup of the abortion pill manufacturer, Danco Laboratories.

Newsweek also cited a pro-abortion World Health Organization (WHO) statistic on worldwide maternal mortality, which doesn’t even list the United States in its top 15 countries of concern.

Newsweek also quoted as its expert Dr. Meera Shah, who has been an Associate Medical Director of a Planned Parenthood facility in New York as well as a Fellow with the Physicians for Reproductive Health (PRH).  Live Action News previously noted that PRH’s stated mission includes advocating for abortion and abortion providers. In addition, PRH is funded by the original funders of abortion pill manufacturer, Danco — namely, the Packard Foundation and the Soros-funded Open Society Foundations. Soros’ Open Society also happens to fund many news media outlets.

Data on abortion complications and maternal mortality in the U.S. are “incomplete” and “highly suspect”

When a woman’s death resulting from abortion is documented by the Centers for Disease Control and Prevention (CDC), this death is also included in total maternal mortality (pregnancy-related) death statistics. The CDC defines a maternal death as “the death of a woman while pregnant or within 1 year of the end of a pregnancy….”

The vast majority of abortions are committed in the first trimester of pregnancy. Comparing this timeframe with that of a pregnancy carried to term plus one year after is disengenuous at best.

In 2019, Washington Post fact checker Glenn Kessler was critical of “anyone trying to tie a link between abortion laws and mortality rates.” He also pointed out, “[S]ince 2007 the United States hasn’t had an official annual count of pregnancy-related fatalities, or even an official maternal mortality rate.”

According to Kessler, “ProPublica has documented [that] maternal mortality statistics in the United States are incomplete and highly suspect, prone to undercounting and overcounting. Since 2003, states have added a checkbox to death certificates, asking whether a person was pregnant when they died or had been in the previous year. But the data collection is not consistent, and the addition of a checkbox appears to have resulted in many false positives.”

Pregnancy is not an illness

Smith followed up her Twitter thread by adding, “The point of this is to say that pregnancy isn’t a life-threatening condition… until it is. For the families of people who’ve died from a pregnancy, it’s cruel to imply otherwise. Maternal mortality is real, much worse for patients of color, and woefully under-researched. It depresses me to think that saying that is somehow controversial.”

In response, Live Action founder and President Lila Rose tweeted in part, “A woman should never be told to kill her child to avoid risk. Doctors can and must care for BOTH patients – a mother and her preborn child. Stop the vicious fear mongering.”

There is never a reason to violently and deliberately take the life of a preborn child in an abortion to save the life of his or her mother. Tragically, women do die from legal abortion – more than media outlets like Newsweek and CBS are willing to report.

Abortion is not a life-saving act. Every abortion ends the life of a developing human being.