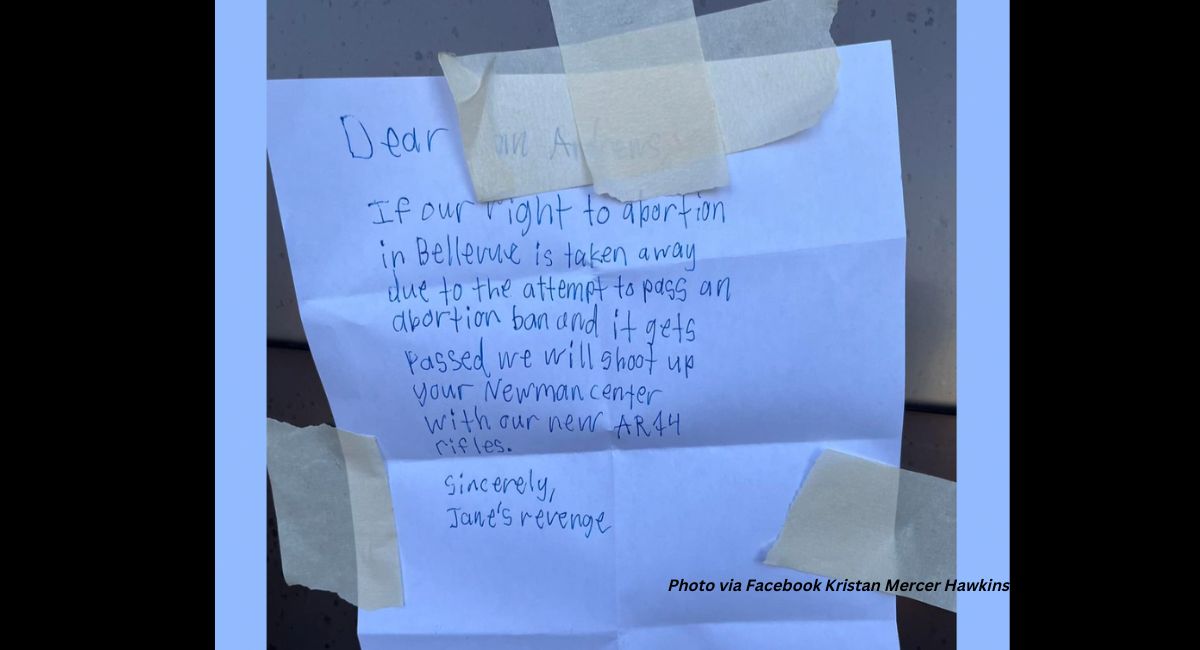 Students for Life of America (SFLA) President Kristan Hawkins shared on social media channels on December 3 that its event venue received a death threat, allegedly from the pro-abortion group Jane’s Revenge. The pro-life organization was holding a workshop at a Catholic Newman Center in Omaha, Nebraska, when it received the note.

“This morning in Nebraska, our team arrived for our SFLAction Political Leadership Workshop where we are gathering activists from across the state to strategize about how to use Students for Life’s Campaign for Abortion Free Cities to shut down the late-term abortion facility in the state,” wrote Hawkins.

“When we arrived, a death threat via guns from Jane’s Revenge was posted on the door,” she explained.

If our right to abortion in Bellevue is taken away due to the attempt to pass an abortion ban and it gets passed we will shoot up your Newman Center with our new AR14 rifles.

Newman Centers are Catholic campus ministry centers named for Cardinal John Henry Newman, located at secular universities for the use of Catholic students. Upon finding the threat, SFLA called the police and decided to relocate to a different venue for safety. They also asked for prayers from their supporters.

The abortion facility in Bellevue, which is mentioned in the note, is operated by late-term abortionist LeRoy Carhart, who has a history of injuring and killing women. Earlier this year, it was learned that Carhart was under investigation by the Nebraska Department of Health and Human Services for committing a severely botched abortion in which a 35-year-old woman allegedly suffered internal hemorrhaging, coded at least once, and required surgery to save her life. Pro-life watchdog group Operation Rescue has reported that Carhart may be relocating the Bellevue facility to Colorado.

In November, FBI Director Christopher Wray told the Senate Homeland Security Committee that about 70% of abortion-related violence since the Supreme Court draft decision in Dobbs v. Jackson Women’s Health Organization was leaked has been perpetrated against pro-life groups. These attacks include vandalism and firebombs. Though numerous pro-lifers have been prosecuted despite an overall lack of violence on their part, there has only been one report of a single federal investigation into pro-abortion violence despite the large increase in incidents.

“We are headed towards tragedy if Attorney General Merrick Garland continues to refuse to act to protect peaceful pro-lifers from pro-abortion terrorist groups,” wrote Hawkins. “Sadly, the incendiary comments of leaders like Hillary Clinton yesterday comparing pro-lifers to the Taliban is case in point the poisoned political climate being deliberately fostered by corporate abortion and their allies.”