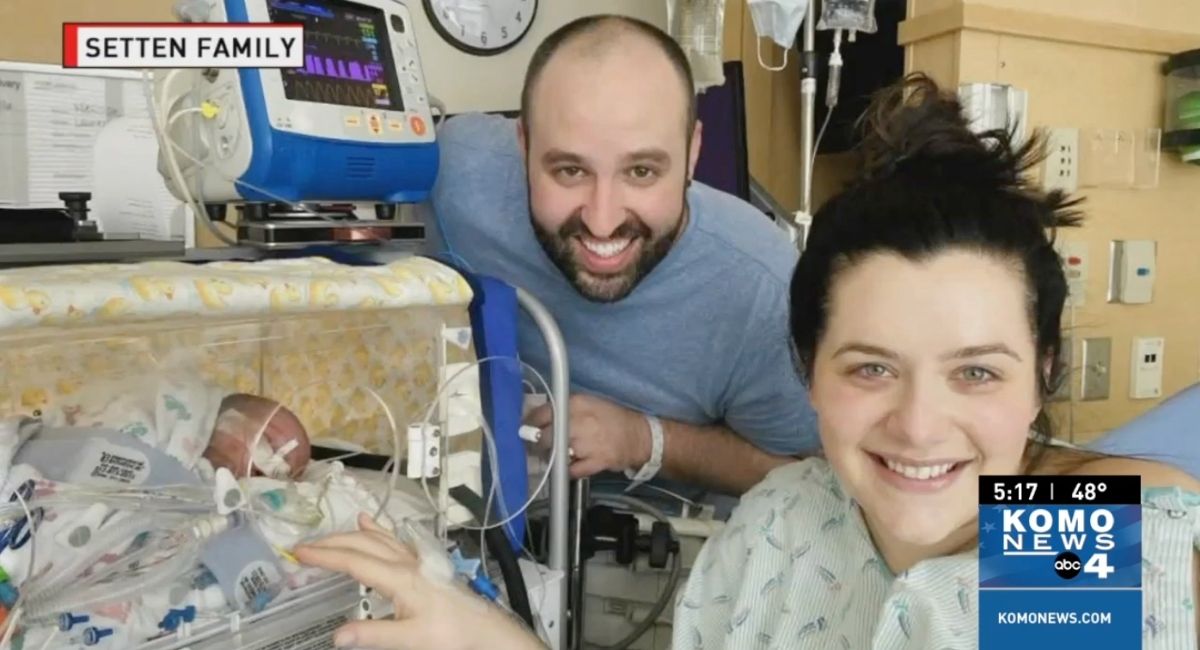 Baby Oliver Setten was saved by a rare surgery performed by a team of 30 doctors and nurses at his birth. According to Komo News, a unique and rarely used C-section technique helped to keep him alive.

During an ultrasound at 18 weeks, Josh Setten and Lauren Sanford learned that their son Oliver had a facial abnormality that would make it difficult for him to breathe on his own. His jaw was smaller than average and he had a cleft palate. “This is a major emergency for the baby if the baby cannot breathe or have airway access,” explained Dr. Edith Cheng, the vice chair for OBGYN at UW Medicine, and one of Sanford’s doctors. Dr. Cheng used the information learned during the ultrasound to prepare for Oliver’s birth and ensure his best chances of survival.

The rare type of C-section they used is called the ex-utero intrapartum treatment, or EXIT. Doctors at UW Medicine in Washington, where Oliver was born, only use this technique about once a year. They knew they would need to insert a tiny breathing tube to help Oliver breathe immediately after birth, but that would take precious time away from Oliver if he were already detached from the placenta when they began. So doctors decided to use the EXIT procedure, partially delivering Oliver via C-section and then inserting the tube before completing his delivery.

READ: Prenatal testing, used in a pro-life way, made the difference for these families 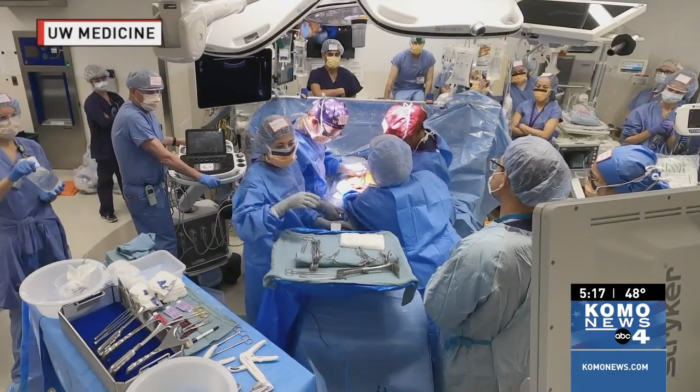 “Just his head and one of his arms was delivered as they were establishing the airway and the doctors were working on him,” Sanford explained. “He was fully supported by my body still. His brain and his body did not know he was out in the world yet.”

The team of doctors — some focused on Sanford and the rest on Oliver — choreographed how the procedure would take place with more than 100 hours of planning. “The movements just around the mother-baby pair were, we’re only talking about inches to less than a foot of movement in this coordination of this group to get the baby to where we needed it to be,” said Cheng. “In the room (and) in spite of everything, it was very quiet. People understood the intensity of this. It was intense, but it was very organized.”

For Sanford, “It was like being a pitstop at a NASCAR race. I was the car and all these people were moving around me and like… I had both of my arms out, they’re putting in IV’s, ‘OK, Lauren we’re doing this (and) OK, this is happening,’ and I’m like, OK!” 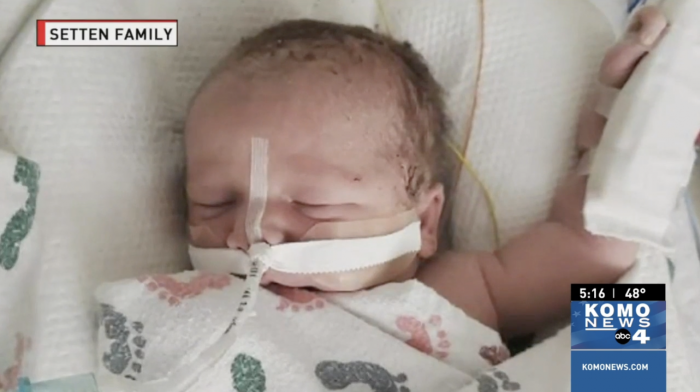 Baby Oliver in a screenshot from Komo News video.

Once Oliver was fully delivered, he was taken straight to the neonatal intensive care unit at Seattle Children’s Hospital. Sanford only got to see him for a moment before he was whisked away.

“I don’t know many people who could go through what she’s been through and be as positive as she is,” said Setten, his father. “But that’s kind of who she is.”

After being discharged from UW Medicine, Sanford went to Seattle Children’s to see her baby boy. She and Setten spend most of their time with him at the hospital, awaiting the day he can finally come home. Doctors aren’t sure when that will be — either weeks or months depending on how he progresses, including when he is breathing and eating on his own.

Oliver will eventually need surgery to repair his cleft palate but his doctors say that the outlook for his future is good, and that’s all thanks to an ultrasound and the use of prenatal testing to save lives.