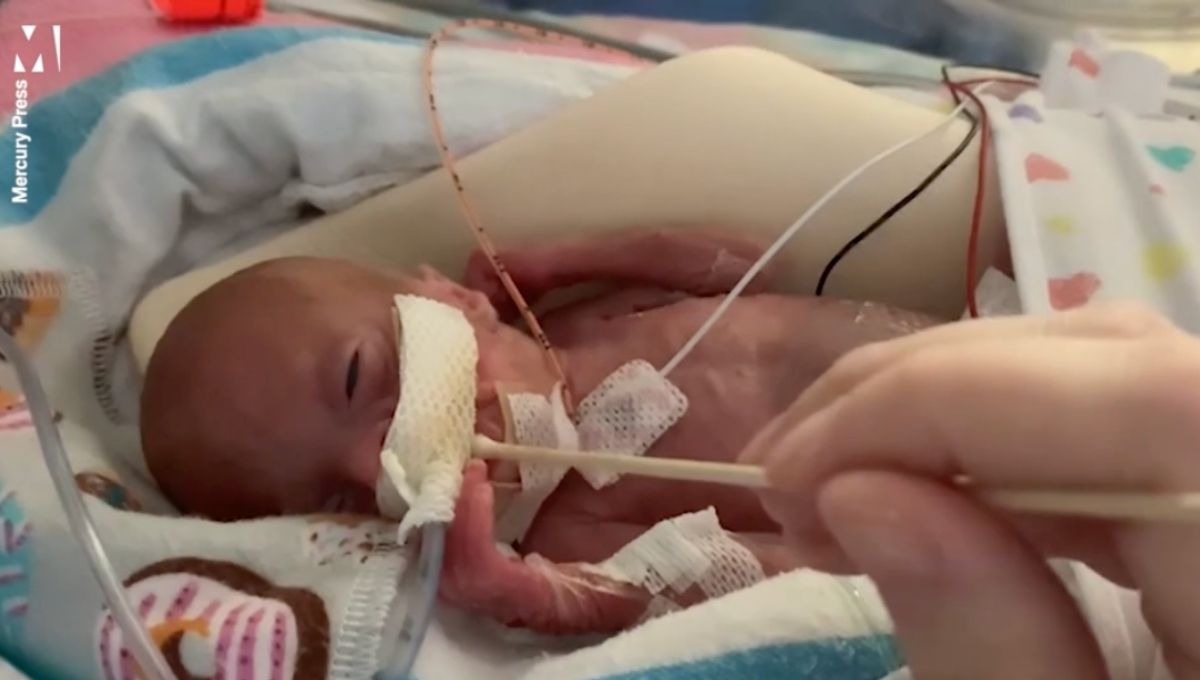 Baby Eris was born at just 22 weeks weighing the same as a small can of soup — one pound, one ounce. She was so tiny, doctors placed her into a plastic sandwich bag in hopes of keeping her vital organs warm. Now her parents say she is “stable” and “happy.”

Her mother Cayce had previously suffered a stillbirth, reported Metro, and doctors stitched her cervix closed during her pregnancy with Eris in order to prevent preterm labor. She was also given progesterone injections beginning at 16 weeks.

“At 19 weeks, the doctors found that I was already dilated by two centimetres,” explained Cayce. “I managed to last another three weeks, which helped us to get Eris over the threshold where medical staff could intervene to save her life.”

Eris was delivered by emergency C-section and spent 254 days in the neonatal intensive care unit. Cayce was finally able to hold her after a week and a half, but her husband Dennis couldn’t hold his daughter until she was seven weeks, due to both her fragile state of health and the hospital’s COVID restrictions.

Eris overcame a staph infection, four bouts of pneumonia, and sepsis. At one point she was placed on a life support machine when she was unable to breathe on her own. Doctors told her parents multiple times to say their goodbyes to their baby.

“There were so many times when we didn’t think she’d make it,” said Cayce. “But she pulled through every single time. Her lungs were the main problem, as she really struggled to breathe alone. She was pretty much on all the maxed-out settings on the ventilator.”

READ: Premature baby weighed just one pound, but is thriving: ‘She is a dream’

Now one year old, Eris is making great progress, though she is still small and has some medical concerns.

“It’s amazing how much she does, a proper little warrior,” said Cayce. “There are times when I was terrified that she wouldn’t make it this far, but she proves me wrong every day. She still has a trach and spends most of the day and night on a ventilator, but she’s stable and a happy little girl.”

Her mother said Eris’s lungs are now maturing, which is helping her make progress every day. “We wouldn’t have it any other way,” she said. “She’s our little miracle.”

Babies born as early as 21 weeks are capable of surviving outside the womb when given proper medical care. Sadly, not every hospital or doctor provides that care. Baby Richard Scott William Hutchinson set a Guinness World Record when he was born at 21 weeks and two days and survived. Within a year, that record was broken by Curtis Zy-Keith Means, who was born and survived at just 21 weeks and one day.