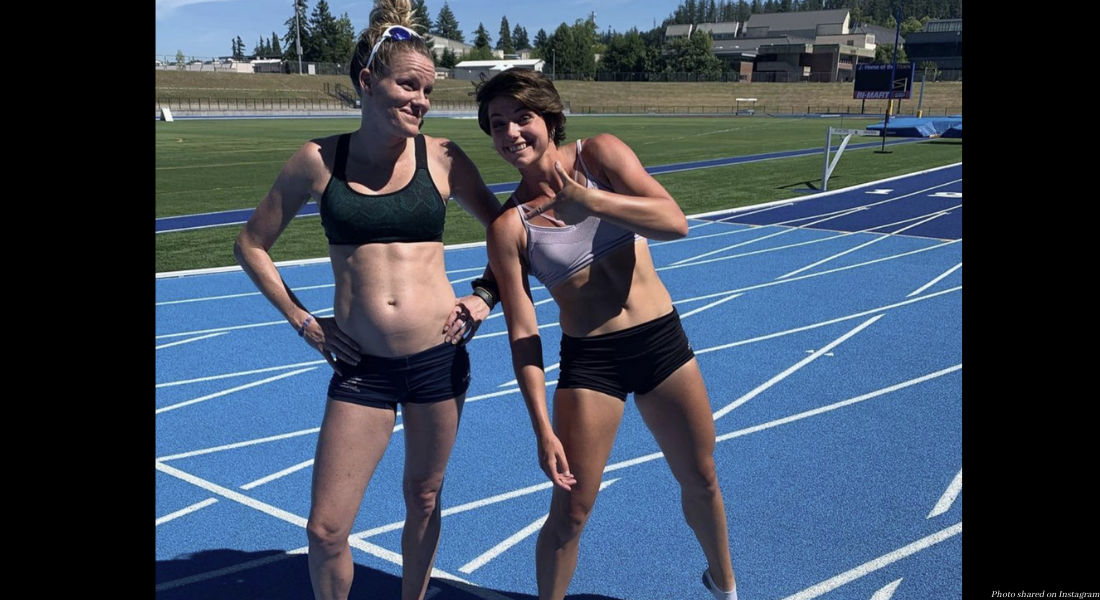 Lindsay Flach, an athlete who has competed in two previous Olympic trials, competed again for the third time, but with a noticeable difference. The 31-year-old was 18 weeks pregnant and announced her big news the day before the trials.

On her Instagram page, Flach posted a series of photos to announce her third Olympic trials for track and field, with the last photo showing an obvious baby bump. “This one looks a little different,” she wrote. “Every story has an end but in life every end is a new beginning. The secret is no secret anymore.”

Flach competes in heptathlons, a track and field sport consisting of seven events: 100-meter hurdles, high jump, shot put, a 200-meter sprint, long jump, javelin throw, and an 800-meter run. It’s considered one of the most difficult events for women, and Flach ultimately placed 15th out of 18 competitors. With the record high temperatures in Oregon, Flach still competed in every event, though she only ran 100 out of the final 800-meter run to make sure she and her preborn baby remained safe. Still, her athletic prowess earned praise as her efforts quickly went viral.

Lindsay Flach, who was competing in the #TrackFieldTrials21 heptathlon at 18 weeks pregnant, intentionally only ran 100 meters of the 800m to close out her Olympic Trials. It's nearly 100 degrees in Eugene right now. Her high jumping was particularly impressive! pic.twitter.com/TbT6DTesFD

In an interview with Yahoo! Sports, Flach explained the circumstances that led to this final Olympic trials. She had planned to make 2020 her last chance at a spot on the Olympic team, before marrying her boyfriend and starting a family. But the COVID-19 pandemic changed everything. She married her boyfriend, and they began trying to have a baby. In March, she found out she was pregnant.

“It was bittersweet,” Flach said in her interview. “I was really excited because I’ve always wanted kids, but it was also a shock knowing that just like that, my track career was over.”

Still, Flach wanted to say goodbye to her life’s passion on her own terms. She made sure to work with her doctor to ensure both she and her baby stayed safe, and ultimately, was given the go-ahead to face one last Olympic trial. “My big concern was making sure that I was healthy and the baby was healthy,” she said, adding that she fought serious illness to make it to where she is now. “My pregnancy was very rough to start. I had about 12 weeks of bad vomiting, which affected my training. If the Olympic Trials were three weeks ago, I don’t know that I would have been there, but I started to feel better and I was able to get some really good practices in.”

While there were plenty of positive responses, some people criticized Flach, too.

“You’re risking the baby. Women shouldn’t do this when they’re pregnant. You’re being selfish. You’re taking someone else’s spot,” she recalled. “I kind of expected that to come, but at the same time I knew I was going to be very cautious and I knew I wasn’t going to take a chance of harming myself or the baby.”

So when Flach ran the hurdles, for example, she made sure to run a slower, more cautious pattern — making it even less likely that she would win, but keeping herself and her baby safe. She cleared the opening bar on the high jump, but then stepped out of competing beyond that. With the 110-degree record-high heat in Oregon, she also knew that she would have to take it even easier, which is what resulted in her not finishing the 800-meter run. “My husband and coach were a little concerned that I was going to be stubborn and try to continue,” she said. “It was so hard to step off the track, but I had no choice, knowing that there was a little one I had to worry about.”

Her final score was much lower than her personal best, but she said she’s thrilled to show what women can do, and to end her athletic career on her terms. “It was hard mentally because I knew I wasn’t going to be able to compete at the level I was capable of 18 weeks ago, but I just wanted to prove what women are capable of,” Flach said. “To end one chapter and begin another on my terms was amazing.”

Other female athletes have competed while pregnant and wowed the world. Alysia Montaño, a six-time US National Champion, World Championship Medalist, and Olympian, has repeatedly competed while visibly pregnant. Tennis superstar Serena Williams won a Grand Slam tournament while two months pregnant, and Kerri Walsh-Jennings, who plays beach volleyball, won an Olympic gold medal while pregnant. Flach now joins the ranks of these women who have shown that it isn’t necessary to sacrifice their families to chase their dreams.