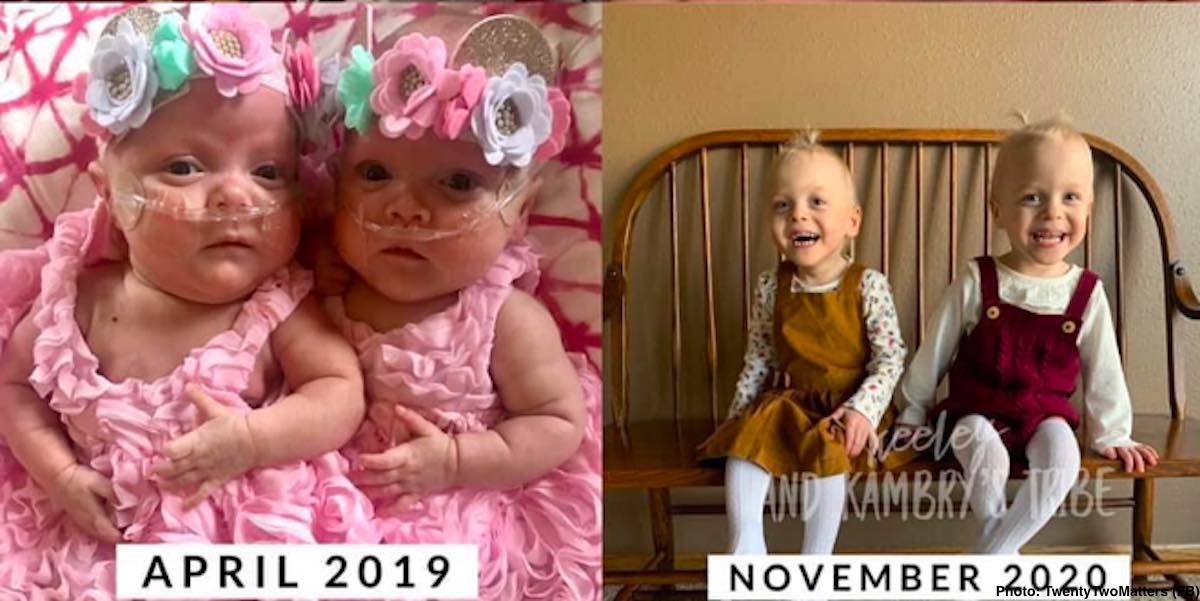 Keeley and Kambry Ewoldt, the world’s most premature twins, are turning two this month! The girls were born on November 24, 2018, at just 22 weeks and one day. Keeley weighed one pound and Kambry weighed just 13.4 ounces. They were each less than a foot long and spent 138 days (Keeley) and 144 days (Kambry) in the neonatal intensive care unit. Today, they face challenges but are doing well. Earlier this month they were finally able to come off of oxygen.

While in the womb, their parents Jade and Wesley Ewoldt learned that the girls had Twin to Twin Transfusion Syndrome which can occur in identical twins when abnormal blood vessels connect the umbilical cords of the twins. One twin receives too few nutrients needed to grow, while the other receives too much blood and nutrients. Doctors frequently recommend aborting one twin, however, there is a surgical option available, which the girls and their mother underwent just one week after diagnosis.

The twins were born prematurely, a known surgery risk, but were cared for at one of the best Level 4 NICUs in the nation. The national survival rate for babies born at 22 weeks is about 10%, but at the University of Iowa Hospitals and Clinics, the survival rate is a whopping 65%.

“[I]t’s just been so much joy to see THEM smile a way I’ve never seen them smile,” Jade wrote on their Facebook page after the girls were taken off oxygen. “They are no longer getting their tubes stuck under the fridge or around that table or tripping each other… and the list goes on.”

The twins’ oxygen tanks weighed 120 pounds each, and without them, the girls are able to spend longer amounts of time jumping in the leaves and on the trampoline. They are also able to take part in little events, like walking to the mailbox with Mom. The girls still battle chronic lung disease and severe bronchopulmonary dysplasia, a type of lung disease that affects premature babies. Kambry can see well, but Keeley, who had ROP Stage 1 (retinopathy of prematurity) when she left the NICU, developed a “lazy eye” and her right eye isn’t seeing as well as her left does. She now wears a patch two times a day for a few hours at a time to strengthen her right eye.

“The girls were diagnosed with Chronic Lung Disease and Severe BPD in the NICU,” wrote their mother. “This has tied them to being home the majority of the time however it doesn’t define their life.

“We’ve made sacrifices many families cannot even fathom to keep the twins healthy & thriving. Until you’ve walked a journey like this you really cannot imagine any of the ups, downs, struggles and difficult choices but many times we’ve all had to adapt and accept things whether we really wanted to or not.” 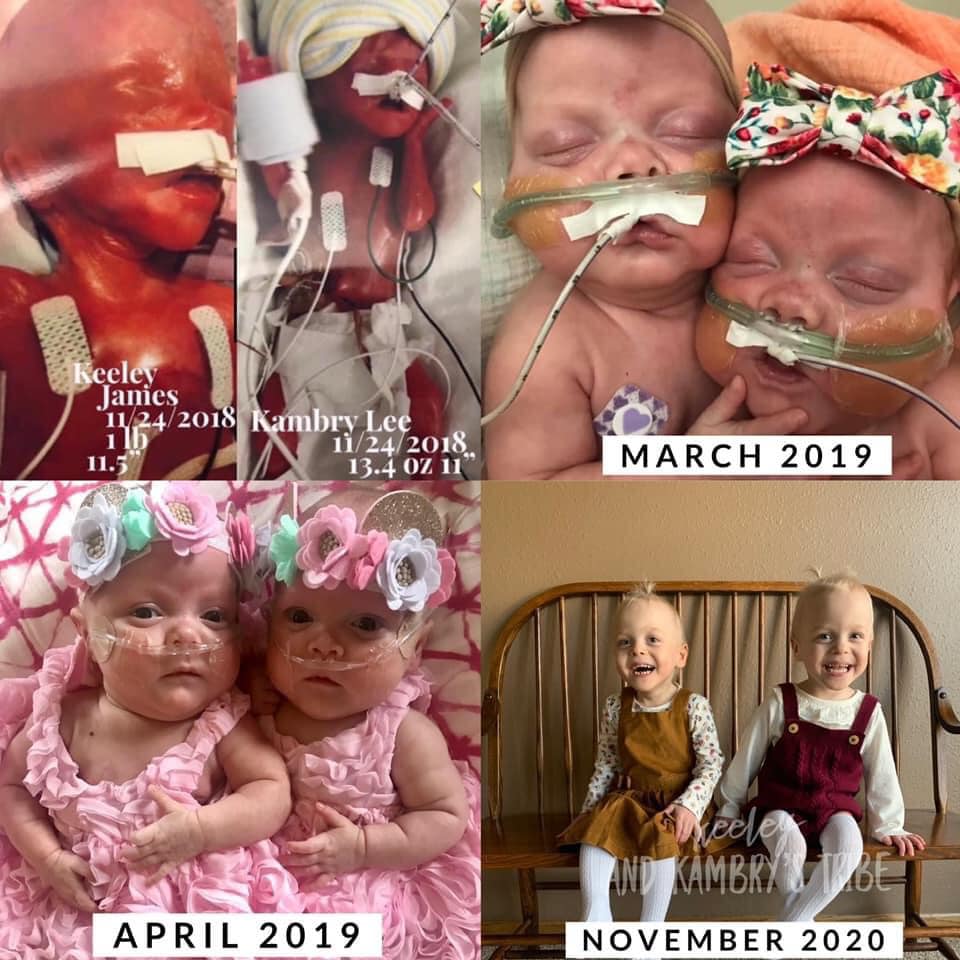 According to their mom, the girls are developmentally like 19-month-olds, which is “very very good” considering they were born 18 weeks early. Though their first diapers were smaller than a pack of gum, they are now wearing a size four. Due to COVID-19 restrictions and their fragile health, their parents are asking for friends to celebrate their upcoming second birthday by sending cards.

“The day the twins were born I was afraid but also was so proud of how well they were doing just in the first few hours of their life,” wrote Jade. “I knew that I was always going to carry that pride with me no matter what happened. I have never wanted this particular journey for the twins but looking back I’m humbled to have been chosen by God to see these miracles unfold and so many prayers answered. Prayers have gone unanswered so many times and answered later when I least expected it and in ways I couldn’t have seen coming. I fully believe the twins’ story needs to be heard and has helped many.”

Jade can’t wait to tell the girls all about their first years someday and the people who have prayed for them as well as the amazing medical professionals who have helped them to grow and thrive.

Babies born as young as 21 weeks have survived outside the womb with medical assistance. Keeley and Kambry, who are in the Guinness Book of World Records, have proven that even twins born as young as 22 weeks should be given a chance at life.