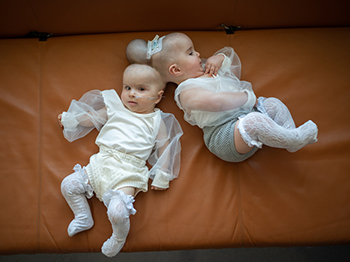 Conjoined twins, who were attached at the head, have been successfully separated in a “landmark surgery,” according to a news release from UC Davis Children’s Hospital in Sacramento, where the surgery occurred.

Abigail and Micaela Bachinskiy are nine months old, and were diagnosed with the rare condition of craniopagus twins when their mother was just 11 weeks pregnant. Their parents, Liliya Miroshnik and Anatoliy Bachinskiy, have three sons, and were “shocked” to hear the diagnosis.

“It was very tough,” Miroshnik said. “I was just shocked. I couldn’t process. When I got home my husband said that everything will be good. We will get through it. This is our kids. We already love them.”

Miroshnik was referred to the UC Davis Fetal Care and Treatment Center where she received specialized care, became educated on the girls’ condition, and prepared for how to care for them after their birth. The medical team practiced every possible situation that might arise at their birth, as well as the risks the girls could face after birth, so that they were well-prepared to help them. That preparation included printing 3D models of the girls’ fused skulls, and using mixed-reality goggles to look inside the girls’ skulls beforehand to find which blood vessels needed to be detangled and separated. 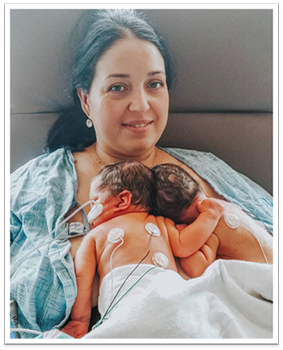 Liliya with Abigail and Micaela in the NICU. Photo: UC Davis Children’s Hospital.

“It’s a very, very rare anomaly,” Dr. Michael Edwards, lead pediatric neurosurgeon, told KCRA. “There are very few children born in any one year worldwide that have this anomaly, and of those, there’s only a much smaller subset that the anatomy is fortuitous enough to be able to attempt a separation — and hopefully come out with two healthy babies.”

On December 30, 2019, Abigail and Micaela were born, and stayed in the Neonatal Intensive Care Unit for seven weeks before heading home. But by the time they reached nine months, doctors felt it was time to separate them. Thirty surgeons, nurses, anesthesiologists, and other medical staff took part in the 24-hour surgery.

“As they got older, there are more risks of shared blood vessels and organs becoming larger and more entwined,” explained Dr. Granger Wong, the lead plastic surgeon who cared for the girls. “The upcoming flu, COVID-19 and RSV season was also a concern.” 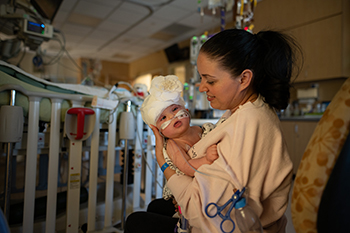 “It was like a choreographed ballet,” Wong said. “It was flawless, with all contingencies covered.” The girls were officially separated at 3:28 a.m. on Sunday, and Children’s Surgery Center nursing lead Aida Benitez said, “I will never see 3:28 on a clock again and not think of the moment that Abi and Mica became two separate babies.”

The girls are recovering in UC Davis’ Intensive Care Unit, where the hospital said they are receiving care from “an amazing team” that is “dedicated to ensuring these very rare twins have the best shot at a healthy life ahead.”

Their mother said that while “[n]o one knows how it’s going to end,” she has faith. “It’s all in God’s hands… That’s what I believe.”