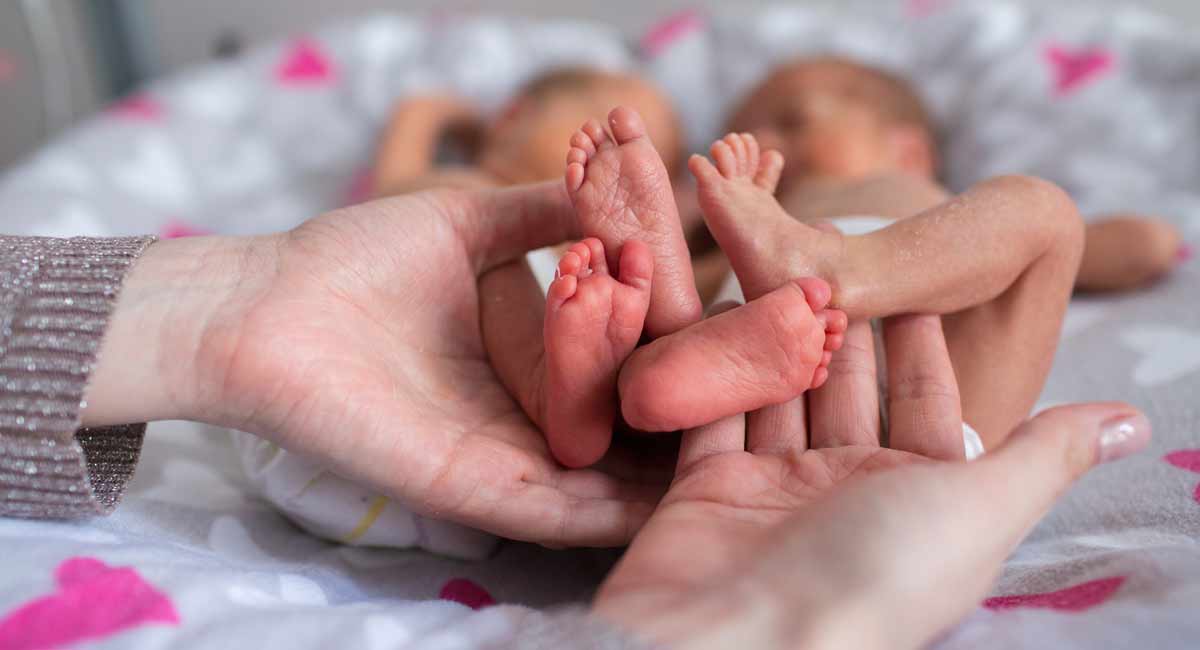 After nearly five months in the hospital, twins given “zero chance of survival” at the time of their extremely premature birth are slated to go home by February 24, their due date. According to the UK Mirror, they weighed just 500 grams, or 1.1lbs, and measured “the length of a king-size Mars Bar.”

The twins were born at 22 weeks and five days gestation, nine days before the 24-week mark after which doctors in the United Kingdom are required to provide medical care to babies born alive and at which point most abortions are banned. Babies born as early as 21 weeks have a chance of survival when given proper medical care.

Mom Jade, 39, and dad Steve, 52, tried to conceive for three years before pursuing in vitro fertilization (IVF) 11 years ago. Round after round failed — seven rounds in total. Jade also underwent several attempts at the transferring of frozen embryos. After suffering an ectopic pregnancy and three miscarriages, she was terrified of getting her hopes up falsely when she learned in 2021 that daughter Harley and son Harry had both successfully implanted after her eighth round of IVF.

IVF comes with high risks for the children created through this common means of reproductive technology. There is a high death toll with IVF, with countless human lives lost as embryos during each failed cycle. IVF only has a 20-30% chance of leading to a successful birth. The children that do survive are at an increased risk of low birth weight, high blood pressure, advanced bone age, hormonal imbalances during puberty, cerebral palsy, and birth defects compared to children conceived naturally. They are also at risk of premature birth and hospital admission.

Jade recalled her fears after learning the eighth round of IVF had led to a pregnancy. “I couldn’t let myself believe it, I was so fearful of a miscarriage or something going wrong,” she said. “I literally didn’t do anything during the pregnancy as a result. I was still in disbelief when we got to 20 weeks, and I hadn’t even hit my third trimester when I went into labour, so we hadn’t bought anything!”

When her water broke just after 22 weeks gestation, she was admitted to Queen’s Medical Centre hospital and told to prepare for the worst. “The doctor was so shocked, she told me she could see the membrane bulging, so the sac of water was basically showing. It was so scary. I knew I was 22 weeks, but I didn’t know about the viability thing. They told me they were going to admit me, but that I was probably having a miscarriage.”

While doctors continued to tell Jade she was “miscarrying,” she insisted, “it couldn’t be because I could feel the babies moving. I knew they were OK, but was being told they wouldn’t survive at this gestation.”

Doctors were under no legal obligation to resuscitate her babies, but fortunately, Jade was at a teaching hospital that regularly provides medical care to babies born at 23 weeks. When she went into labor on October 26, 2021, Jade was just 30 hours shy of the 23-week mark.

“Labour happened really quickly. I was denied pain medication and monitoring during labour as I wasn’t viable, which was awful, really. It was only because the babies were born with signs of life that they chose to intervene medically. They were alive, moving around, and they cried. Their little cries sounded like a tiny kitten.”

Since their birth, the twins have faced numerous life-threatening health challenges, including necrotizing enterocolitis, and have required multiple surgeries. Jade searched on Google to find other moms of twins born at 22 weeks who survived, and connected with an American mom who acquainted her with how to navigate life in a neonatal intensive care unit (NICU). Harley and Harry have overcome every challenge, and hospital staff now anticipate a discharge on or around February 24, the babies’ original due date.

Jade noted, “The doctors are amazed, they’re really rooting for us now. There’s not one surgeon in the hospital who hasn’t heard about our twins.” She added, “I’m so proud of my babies – they’re little fighters. The doctors were saying the babies wouldn’t survive at this gestation. I was still two weeks away from what the UK classes as viable and the babies were given a 0% chance of survival. It was only because I was at a teaching hospital and that the babies were born with signs of life that they chose to intervene medically.”