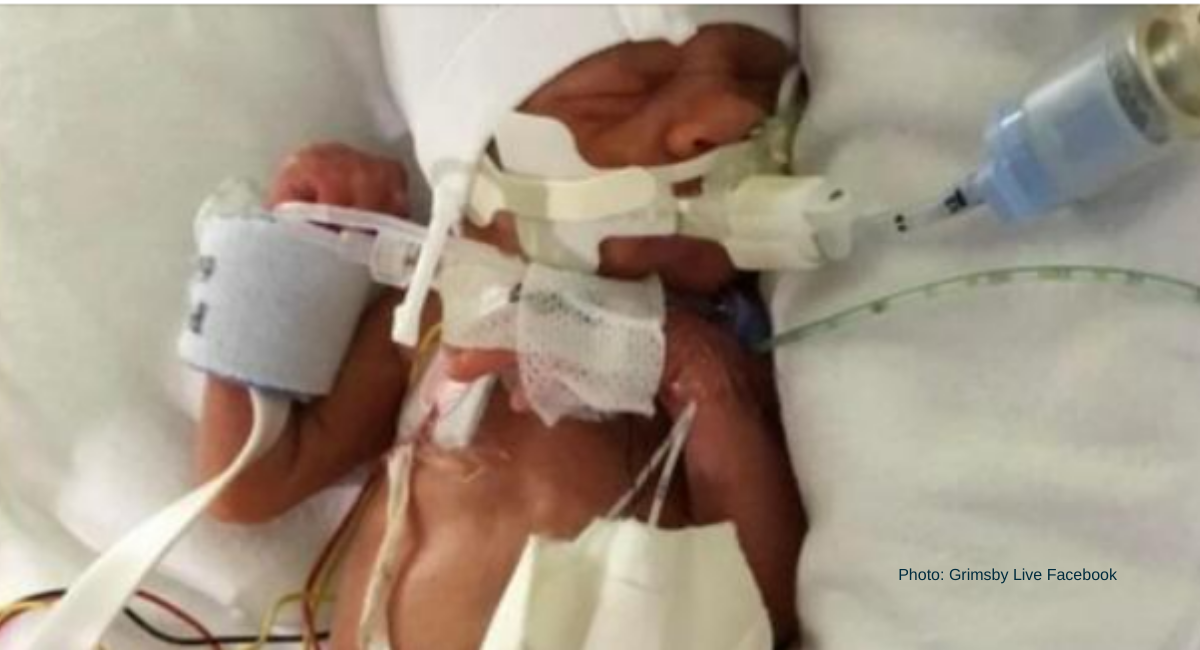 After a frightening medical ordeal, preemie Ayla-Grace was born at just 26 weeks on April 29 in order to protect her life and the life of her mother.

The baby girl weighed just one pound, 15 ounces after being born 14 weeks before her due date after her mother, Jaz Smith, suffered a health crisis. Smith’s liver started to fail, and blood was not flowing to the baby, according to WalesOnline. She first noticed something was wrong when she began to experience swelling at about 24 weeks.

“I was told it was too early to be pre-eclampsia by the doctors as I was only 24 weeks gone,” Smith explained. “And then the week after I rung the hospital again because my swelling just wouldn’t go down.”

“I was then admitted at 25 weeks and was in hospital for a week. For me, that was the hardest time because I wasn’t allowed to see my eldest son who was only three years old. I really struggled being away from him.”

Diagnosed with pre-eclampsia at that point, Smith was expected to develop eclampsia within the next 10 days. But that’s when things got even worse.

“I had three doctors in my room at 2am in the morning listening to my daughter’s heartbeat and they brought a sonographer in to check her,” explained Smith.

“In the process of that, we found out that my liver was failing and I’d had a placental abruption — a serious condition in which the placenta separates from the wall of the uterus before birth,” she continued. “My daughter had no blood flow and they’d said it had been like that for a good few days. They then told me that if we didn’t get her out soon, then she wouldn’t make it and neither would I.”

When Ayla-Grace was born, the cord was wrapped around her neck. She was taken to the Neonatal Intensive Care Unit where she stayed for six days before being transferred to Scunthorpe General Hospital where she would remain for three more weeks. After being moved back to the Diana Princess of Wales Hospital, the newborn needed major surgery.

“Within the first few months of her short life, she underwent open-heart surgery which was extremely traumatic,” said Smith. “I was told she had a hole in her heart that didn’t close properly.”

Ayla-Grace also deals with chronic lung disease and lung damage and still requires oxygen. Those first months after her birth were “the scariest thing in the world” for Smith, but she said today, at nearly seven months old, Ayla-Grace is thriving.

“Premature babies are little miracles and they really do just thrive off life,” said Smith. “My baby girl is nearly seven months old now and I feel incredibly lucky to have her in my life.”

Abortion advocates often claim that abortion must remain legal through all nine months of pregnancy for cases in which the mother’s health or life is at risk, however, abortion is never medically necessary. Ayla-Grace’s life was able to be saved along with her mother’s because doctors provided both of them with real health care and treated both mother and baby as patients.