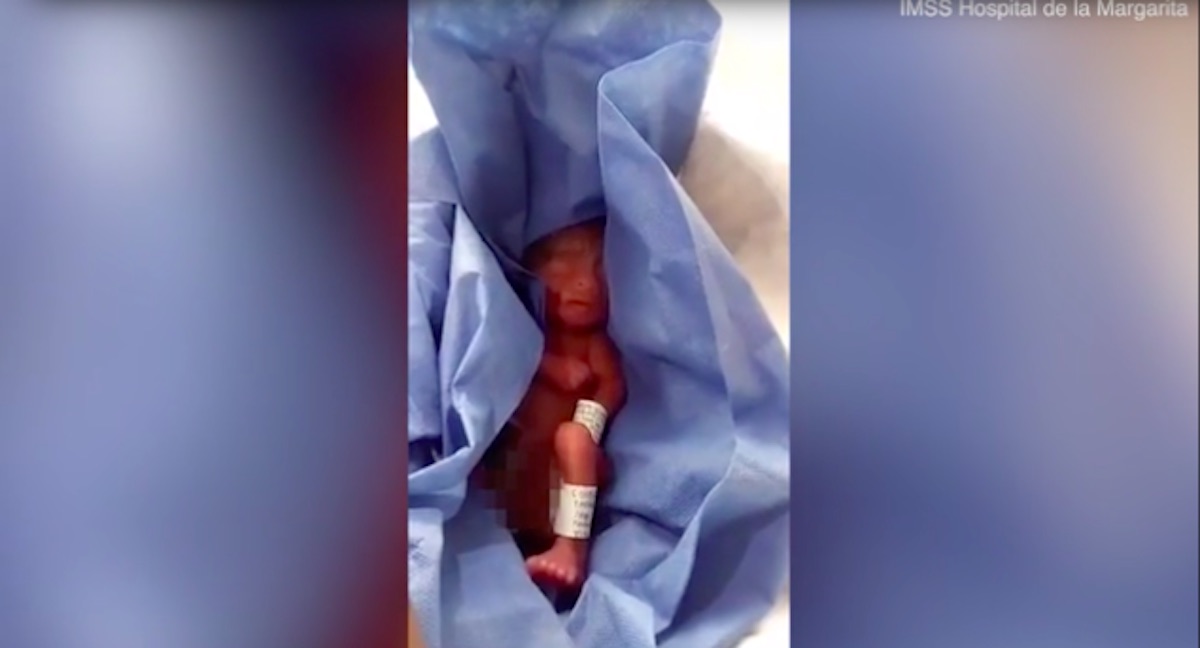 A shocking UK Daily Mail article details how a micro-preemie born in Mexico was discovered to be alive six full hours after he was brought to the hospital’s morgue. The unnamed child was born on October 21st at just 23 weeks gestation at La Margarita hospital in the Mexican city of Puebla. The Daily Mail quoted the owner of the funeral home who arrived to pick up the child’s body from the hospital’s morgue:

When we arrived we realised it was crying and moving. The unnamed baby, said to have been born at 4.29am local time yesterday, is understood to have been rescued alive around 10am. We called the father over and he also saw it was crying and so we got the doctor who had signed the death certificate to come urgently. The baby was born just after 4am and was found alive around 10am so that’s nearly six hours that it was in the morgue refrigerator.

I can’t understand how he didn’t die while he was there. The fridge it was in is normally used to keep the limbs of amputees. I’ve never experienced anything like this before.

The baby was rushed to a neonatal intensive care unit.

In video footage, the little boy’s father is heard lovingly encouraging his son to fight for life. “Here I am. Carry on fighting, little one. Resist, my love,” he said. “The boy’s crying, he’s still crying, he’s alive. Poor boy, carry on fighting, tiny one.” The man then begs God for his son to live. “‘Please God, accompany this little one, stay with him because he’s still alive.”

An investigation into the incident is underway. The IMSS (Mexican Institute of Social Security) is overseeing the investigation, and released its own statement, noting, “In the early hours of Wednesday October 21 a baby was delivered prematurely at 23 weeks. ‘It was found to have no vital signs and was pronounced dead and transferred to the hospital morgue area. ‘When the body was about to be handed over to a relative, medical staff and a representative of the undertakers realised the baby was alive.”

While babies born at this age are not guaranteed to survive and most hospitals consider 24 weeks to be the age at which they are willing to attempt to save premature babies, many micro-preemies (babies weighing less than 1 pound 12 ounces or born before 26 weeks gestation) have defied the odds. (Read about some of them here, here, here, here, and here.) The survival rate of babies born at 22 weeks is 10%, and at 23 weeks it is 50-66%. The willingness of the doctors and hospitals to provide medical care to micro-preemies also seems to be a significant factor in their survival.