The preliminary hearing for Center for Medical Progress (CMP) investigators David Deleiden and Sandra Merritt is well underway with testimony that includes a prominent Planned Parenthood abortionist. On Thursday, the former Planned Parenthood abortionist known as Doe 9 continued her testimony and admitted that the CMP undercover videos of her which played during the hearing were not edited after initially claiming they were.

Doe 9, who was granted anonymity by the court, took the stand on Wednesday and lied. According to a tweet from CMP, she claimed the “videos were edited to make her say things she didn’t say.” When she retook the stand on Thursday, CMP said she continued “to play games with the court.”

On cross examination, Merritt’s attorney Horatio Mihet asked Doe 9 whether she cared that the tape had been made public. When Doe 9 answered yes, he impeached her with a transcript of her deposition from Planned Parenthood’s civil case against the Center for Medical Progress, where Doe 9 said, “I haven’t done anything wrong in the videos. It doesn’t matter to me if they’re released publicly.”

He also asked her whether she thought their conversation could be overheard by the server and other restaurant staff who could be seen passing by.

California’s penal code excludes from a confidential communication any conversation that can be reasonably overheard or recorded; an important aspect of Merritt’s and Daleiden’s defense.

Doe 9 admitted that the CMP video clips of her in a lunch meeting with Daleiden and played during the preliminary hearing were not altered, however, she refused to answer yes or no questions. 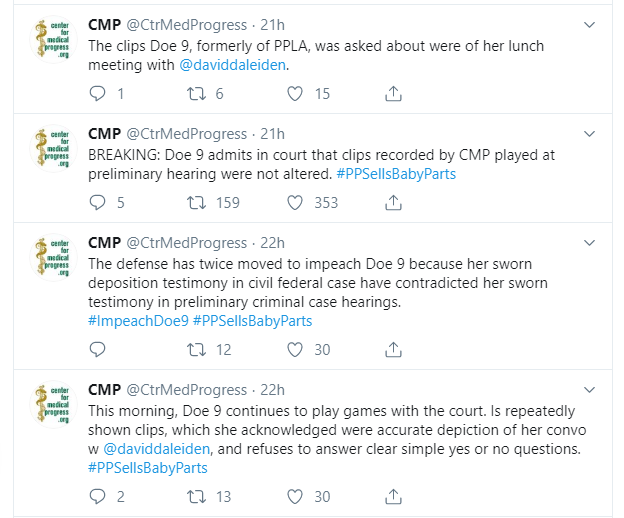 According to LifeSiteNews, descriptions of Doe 9’s testimony seem to point to Doe 9 as the Planned Parenthood abortionist seen in the first undercover video released by CMP back in 2015. In this video, then-Planned Parenthood Federation of America’s Senior Director of Medical Services, Dr. Deborah Nucatola spoke about how abortionists made a habit of altering abortion procedures in order to keep the babies’ heads intact for the procurement companies. During the hearing, she refused to clarify what she meant when she said abortionists would move the position of the baby to feet-first before the abortion. The abortion procedure known as “partial-birth abortion” in which preborn babies are delivered feet-first in the breech position before being killed is illegal, but a Planned Parenthood staffer has described how abortionists use documentation to get around the ban.

Doe 3, who took the stand on Wednesday, acknowledged that the Stem Express documents which Stem Express originally claimed were not real, are in reality, real and valid.

Doe 12 took the stand on Thursday and when asked about the heads of aborted babies being attached to the body for tissue procurement, admitted that the photos from CMP were truthful. According to CMP, Doe 12 said: “that the heads are sometimes attached and sometimes are not attached to other parts of the body.”

When preborn children are dismembered through a D&E abortion, as seen in the video below, which is the go-to abortion procedure in the second trimester, their arms, legs, and heads are ripped from their torsos and their heads are crushed. In the illegal partial-birth abortion procedure and induction abortions, the babies would be removed intact.

The undercover videos filmed by CMP were immediately and falsely labeled as fake by Planned Parenthood upon their release, a claim that was backed up by Fusion GPS, which the Weekly Standard described as “an opposition research firm with ties to the Democratic party and has a history of harassing socially conservative Republican donors.” However, as Politico reported, the firm actually found there was “no evidence that the anti-abortion group behind the attack made up dialogue” and said there was no “widespread evidence of substantive video manipulation.”

As Live Action News has previously reported, Alliance Defending Freedom had cybersecurity and forensic analysis company Coalfire Systems review the “full-footage videos” from CMP. Coalfire Systems found that the videos were not edited and any footage removed in order to shorten the videos were “non-pertinent” events like meals and bathroom breaks.

“The Coalfire forensic analysis removes any doubt that the full length undercover videos released by Center for Medical Progress are authentic and have not been manipulated,” ADF Senior Counsel Casey Mattox said in a statement. “Analysts scrutinized every second of video recorded during the investigation and released by CMP to date and found only bathroom breaks and other non-pertinent footage had been removed. Planned Parenthood can no longer hide behind a smokescreen of false accusations and should now answer for what appear to be the very real crimes revealed by the CMP investigation.”

Doe 9 was originally not scheduled to testify that afternoon, however, CMP said, “The Attorney General’s office, at the sudden prompting of Planned Parenthood, switched the order of witnesses so that Doe 9 would take the stand in the afternoon instead of Doe 10. This last-minute swap appeared orchestrated to interfere with the Defense, who had been preparing for Doe 10.”

Deleiden and Merritt are charged with 15 felony counts of invasion of privacy due to the videos exposing the sales of fetal body parts by Planned Parenthood. The preliminary hearing to determine if the case against them should go to trial continues next week.