UPDATE – 10:00 EST: The Center for Medical Progress has released a summary of the first day’s testimony, which included Fowler claiming she didn’t know what a fetal tissue procurement organization is, even though she could identify StemExpress as a repeat NAF vendor. Fowler also admitted there were no rules against video recordings for NAF exhibitors.

Doe 7, an abortionist, testified that she gave tissue from abortions committed at Planned Parenthood regularly, and that she had heard of money being exchanged. The attorney general’s office also played a nearly 20-minute long video that has never before been released of Doe 3, a late-term abortionist, and the defense will cross-examine her tomorrow about the “shocking statements” on that video.

Daleiden also released a statement in this summary:

“Planned Parenthood abortion providers appeared under oath in court today and admitted supplying the body parts of children in the womb to for-profit brokers like StemExpress. Meanwhile, the Vice President of the National Abortion Federation denied any knowledge of the gruesome trafficking in fetal body parts, despite hosting StemExpress as a major vendor at the trade shows. The first day of testimony confirmed what we have been saying all along—this is a biased attack on First Amendment civil rights and a political prosecution to shield Planned Parenthood from accountability for their crimes against women and children.”

UPDATE – 3:00 EST: Fowler’s testimony is already showing the conflict of interest between the abortion industry and the California attorney general’s office. The Center for Medical Progress is reporting that Fowler admitted on the stand to “meeting with CA AG’s office and NAF General Council in April of 2019” to discuss the questions that would be asked during the hearing, and that her travel expenses are being paid for by the National Abortion Federation, as she is not a resident of California. Despite this, she was a witness for the attorney general’s office.

This is just another example of the ongoing conflict of interest between California officials and the abortion industry.

UPDATE – 2:00 EST: In the latest updates from the Center for Medical Progress, National Abortion Federation vice president Melissa Fowler has taken the stand. During questioning, Fowler insinuated that pro-lifers were violent, and “stops short of calling prolife Americans domestic terrorists.”

The argument that Daleiden and Merritt’s work led to violence was unsuccessfully made earlier this year in a lawsuit, in which Planned Parenthood claimed that the videos aimed to incite “threats” and “violence” against the abortion industry. No testimony or evidence was provided to back up these claims.

UPDATE, 12:00 EST: The Center for Medical Progress tweeted that members of the abortion industry and their lawyers were beginning to arrive, and that proceedings have begun. Meanwhile, supporters of Merritt and Daleiden were spotted outside of the courtroom. 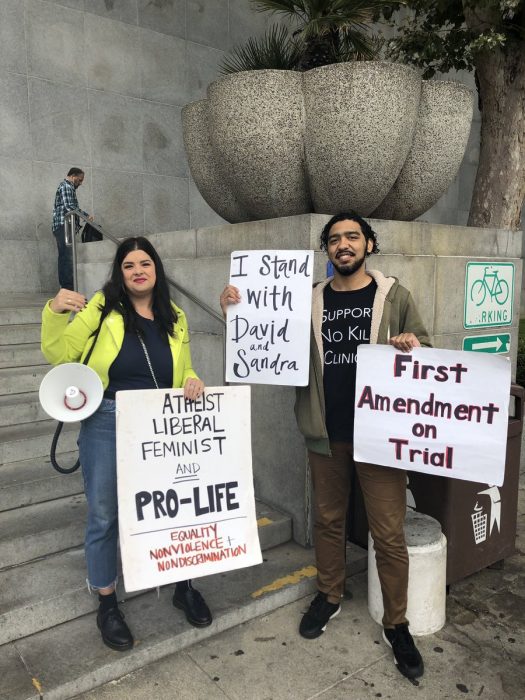 ORIGINAL ARTICLE: The preliminary evidentiary hearing against the Center for Medical Progress investigators Sandra Merritt and David Daleiden will begin today. Merritt and Daleiden are defending themselves against felony charges brought by former attorney general Kamala Harris, and current attorney general Xavier Becerra. Merritt is being represented by Liberty Counsel, while Daleiden is being represented by the Thomas More Society. The Center for Medical Progress will be live-tweeting the hearing throughout the day.

In a statement sent to Live Action, Daleiden said the abortionists, along with StemExpress leadership, will take the stand to testify about the statements made in the undercover videos released after a two-year investigation. “My defense lawyers, former Los Angeles District Attorneys with over 60 years’ of prosecutorial experience between them, will cross-examine the witnesses about their deeply incriminating admissions on the undercover tapes, some of which have never been released publicly,” he said. “This will be extremely discrediting for Planned Parenthood and Kamala Harris.”

According to Liberty Counsel, Merritt and Daleiden are the first undercover journalists to be criminally prosecuted in California history, indicating that this prosecution is nothing more than retaliation.

“Sandra Merritt did not violate any laws,” Mat Staver, Liberty Counsel founder and president, said in a statement. “The evidence will demonstrate that California’s first-ever prosecution of an undercover journalist is selective and discriminatory. It is time to pull the mask off the unseemly collusion between Planned Parenthood and the attorney general that is ultimately responsible for this political prosecution.”

The preliminary hearing is expected to last until September 17th.

Editor’s note: This article will be updated throughout the day as new information is released.