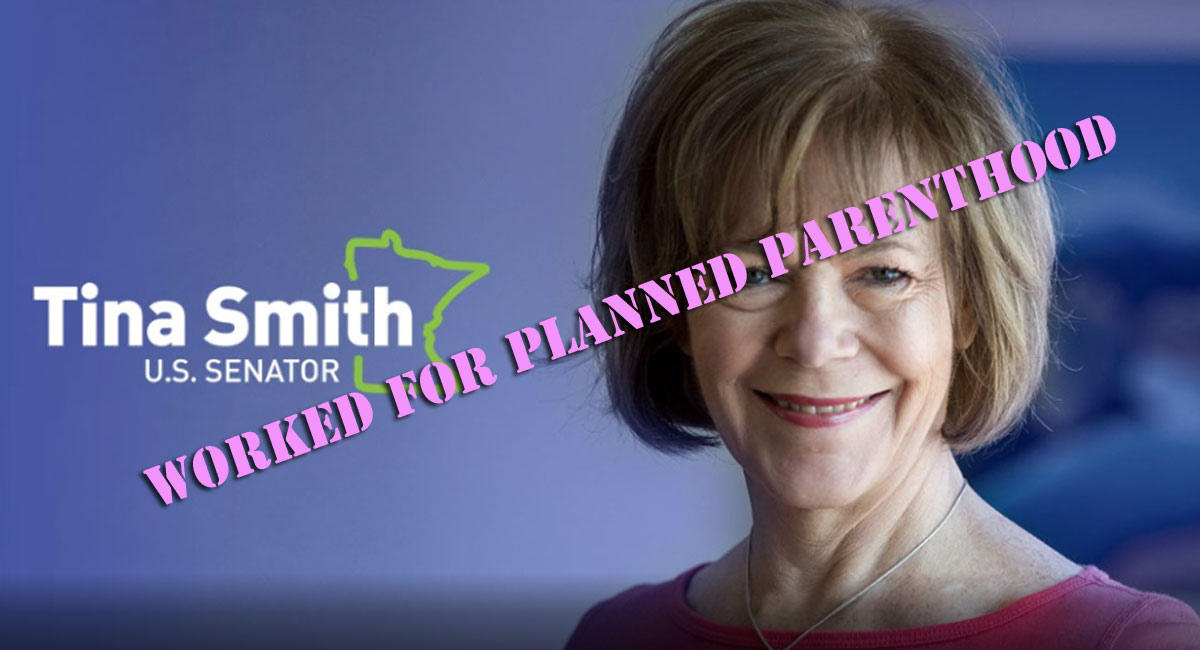 Planned Parenthood is dumping hundreds of thousands of dollars (so far) into a Minnesota U.S. Senate race in hopes that one of its former staffers will win. Earlier this year, Lt. Gov. Tina Smith was appointed by Democratic Gov. Mark Dayton to replace outgoing abortion supporter, Senator Al Franken, who resigned amidst allegations of sexual misconduct. Planned Parenthood wasted little time congratulating her. Perhaps that’s because she’s one of their own.

According to Smith, her father was a board member for the organization. Smith herself became heavily involved with the abortion corporation and once worked as “vice president of external affairs for Planned Parenthood Minnesota, North Dakota and South Dakota, from 2003 to 2006,” according to CBS News. Smith has been dubbed the #AbortionSenator, and with good cause. 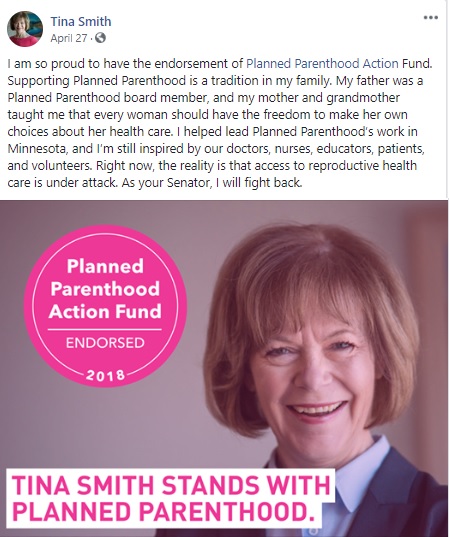 Minnesota Citizens Concerned for Life (MCCL) reported that during Smith’s tenure at Planned Parenthood from January 2003 to February 2006, “The organization performed 9,717 abortions in Minnesota… and increased its abortions by 22 percent. It was also reimbursed $458,574.74 by Minnesota taxpayers for performing 1,892 abortions on low-income women. Planned Parenthood became the largest abortion provider in the state in 2004—and has held that position ever since. It received $12.65 million in government grants from 2003 to 2005.”

“Smith also lobbied against Minnesota’s Woman’s Right to Know law, which ensures informed consent prior to abortion, and Minnesota’s Positive Alternatives program, which empowers women who want to keep their babies by providing support and alternatives,” MCCL states on their website.

Smith is facing off against her opponent with significant financial help from Planned Parenthood’s political PAC. Smith is running against Republican State Sen. Karin Housley in a special election in an attempt to keep her Senate seat. Housley has support from the pro-life SBA List and was recently praised by SBA President Marjorie Dannenfelser as a person who “will work to protect unborn children and their mothers and stand up for Minnesota taxpayers.”

According to MPR News:

The national Planned Parenthood Votes political action committee has raised more than $11 million this election cycle and still has $6.4 million in the bank. They’ve already spent nearly $300,000 supporting Smith in the race…. Smith’s race and the governor’s race are their two top priorities for Planned Parenthood in the state this fall.

“Since taking office early this year, Smith has voted against protection for unborn children after 20 weeks, when they can experience pain while being dismembered,” MCCL reports.

The political advocacy group Life Right Action (LRA) recently created a website highlighting Hubbell’s activism, titled “Wrong Way Fred.” The group uploaded an image of a Hubbell mailer, obtained by LRA, which states in part, “[I]n Dubuque, Planned Parenthood was blocked from opening a new clinic…. He and his wife Charlotte arranged to personally purchase a property and turn it over to Planned Parenthood.” Hubbell talked about the purchase in his campaign video below:

A former senior director at a Planned Parenthood affiliate in Florida, Anna Eskamani, is running for State House of Representatives in the 47th District. She can be seen in the video below touting her support of the organization and of abortion. She an also been seen on Facebook posing with abortionist Willie Parker.

Planned Parenthood has committed millions of dollars to fund several key races across the nation. The organization, which has a long list of abuses, and appears more interested in accumulating supporters than offering women real health care solutions, receives over half a billion dollars annually from the taxpayer.