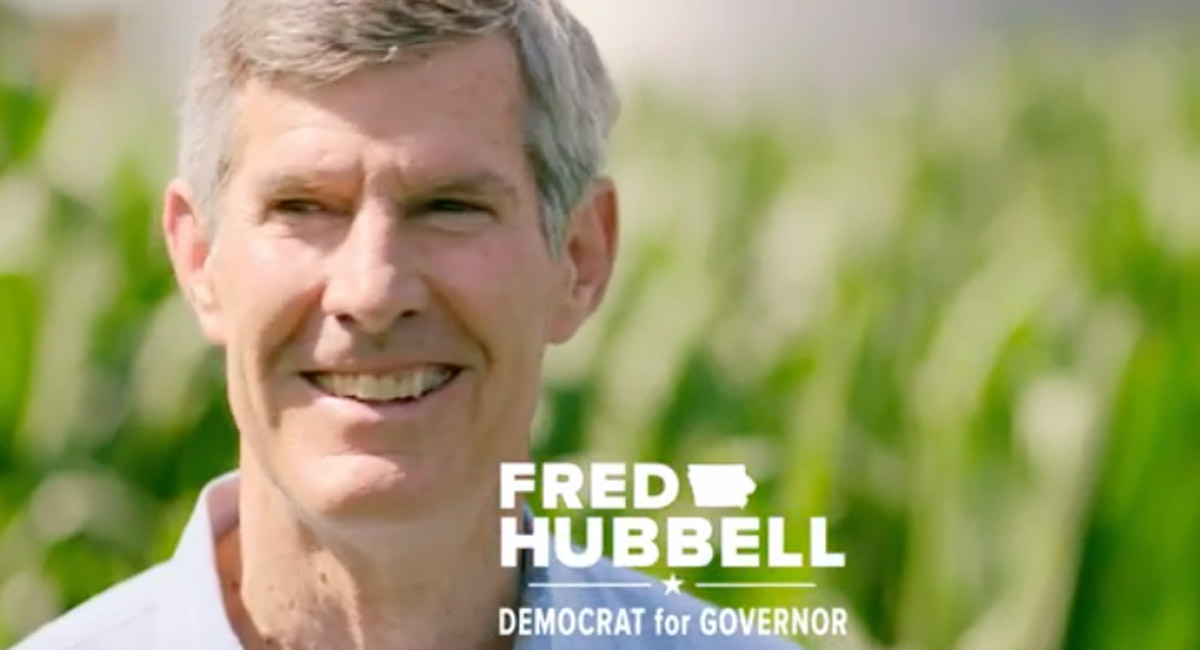 A philanthropist who admittedly helped to purchase a building for Planned Parenthood to operate an abortion facility is now running for Governor of Iowa. Democrat Fred Hubbell is opposing incumbent Iowa Governor Kim Reynolds (R), who recently signed the state’s Heartbeat Bill. As the state’s previous Lt. Governor, Reynolds assumed the office after Governor Terry Branstad left to take a position with the Trump Administration as Ambassador to China.

Hubbell’s campaign website is open about his support of the abortion corporation, despite records (including court documents) showing that Planned Parenthood covers up for child sexual abusers. His website reads, “For over thirty years, Fred has worked to increase access to quality, affordable health care for every Iowan through his work with Planned Parenthood, and serving as chair of the Mid-Iowa organization in 1984….”

He even boasted of his connection to the abortion corporation in his first political ad, “Stand Strong.”

But Hubbell is much than just your average “supporter,” according to the organization itself:

Hubbell served on Planned Parenthood of Mid-Iowa’s Board of Directors from 1982-1987 and on the organization’s Foundation Board from 1985-1992. As chair of the board in 1984, he led the search committee that hired longtime President/CEO Jill June. Additionally, he and his wife Charlotte also helped Planned Parenthood overcome barriers to open a new health center in Dubuque in 2011. 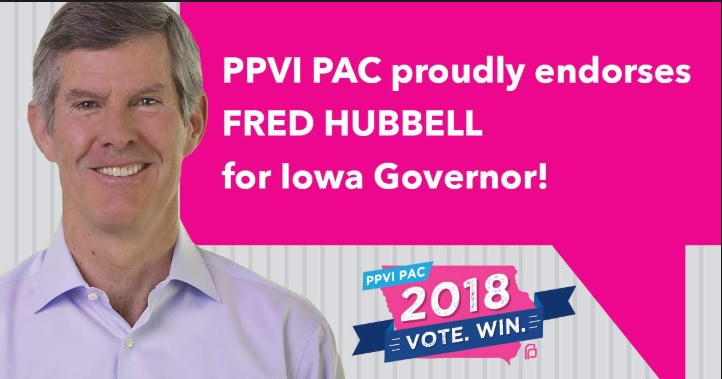 Hubbell, who initially self-funded his campaign, sent primary mailers out touting his support of the organization, despite its long list of abuses.

“My wife and I continue to be extremely supportive of Planned Parenthood,” Hubbell told the Des Moines Register’s editorial board. “We helped them open a clinic in Dubuque when they couldn’t get access to property up there.… “

“Helped”? The Iowa gubernatorial candidate used his own money to purchase the building.

The political advocacy group Life Right Action (LRA) recently created a website highlighting Hubbell’s activism, titled “Wrong Way Fred.” The group uploaded an image of a Hubbell mailer, obtained by LRA, which states in part, “[I]n Dubuque, Planned Parenthood was blocked from opening a new clinic…. He and his wife Charlotte arranged to personally purchase a property and turn it over to Planned Parenthood.” 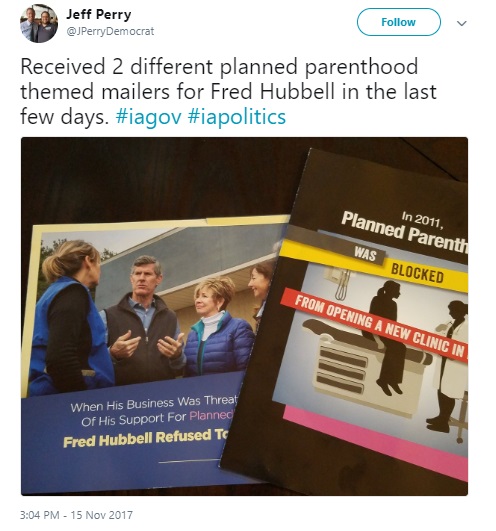 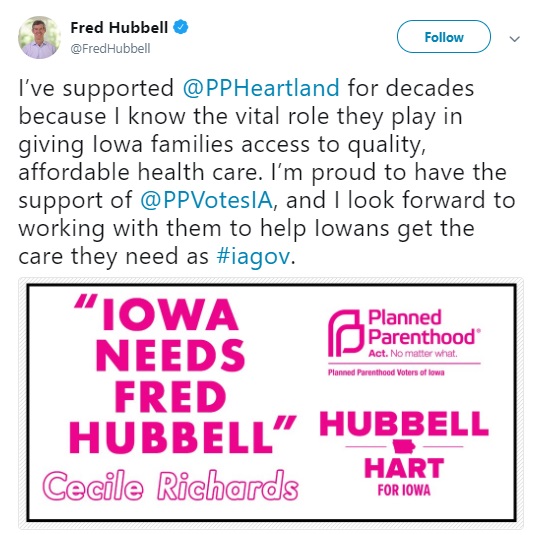 Live Action News reached out to the Hubbell campaign for a statement, but as of the writing of this article, they have failed to respond. 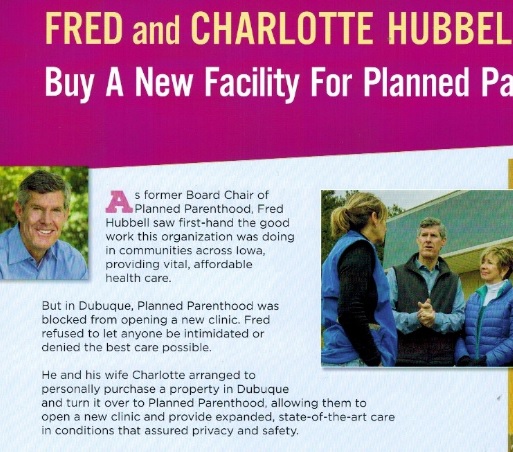 However, this campaign video ad (below) says Hubbell’s money was used to purchase a building for a new facility. It states in part, “Fred and Charlotte believe women need access to quality health care… so they helped buy a building to open a new Planned Parenthood clinic in Dubuque….”

In 2014, the Fred and Charlotte Hubbell Foundation gave the organization $100,101 in charitable donations, according to this 990: 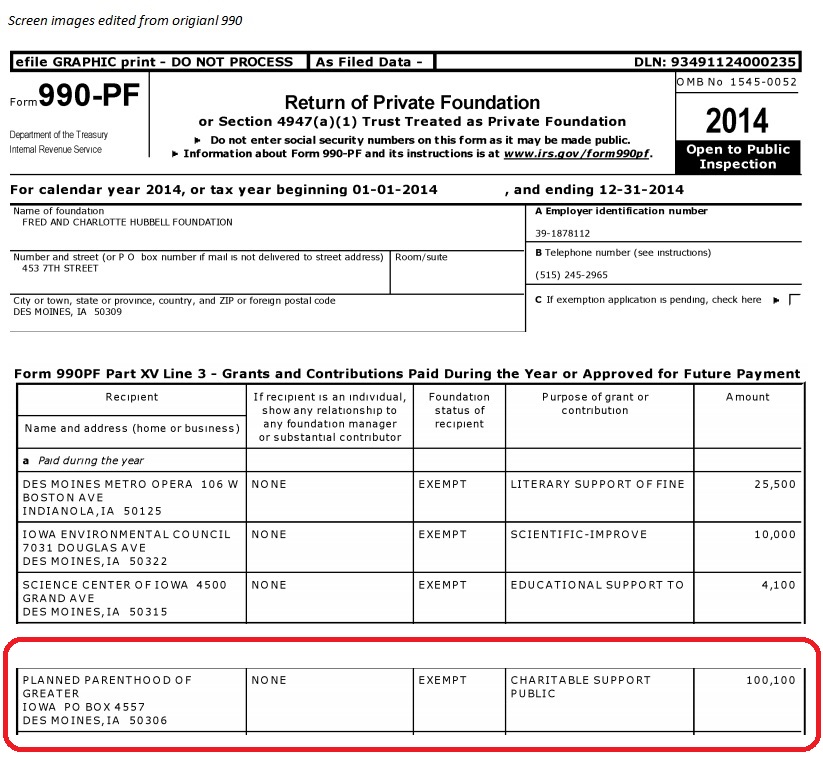 Despite the alleged “need” and a ton of Hubbell money flooding Planned Parenthood, the Dubuque facility opened in 2014 and then abruptly announced a closure in January of 2016, citing a lack of demand for its services.

Dubuque wasn’t the only Planned Parenthood closure in the state. Jenifer Bowen, president of Life Right Action, told Live Action News that between 2010 and 2017, 20 of the abortion corporation’s centers closed statewide.

Perhaps Iowa residents don’t need abortion or this organization’s version of “healthcare” as much as Hubbell thinks they do.