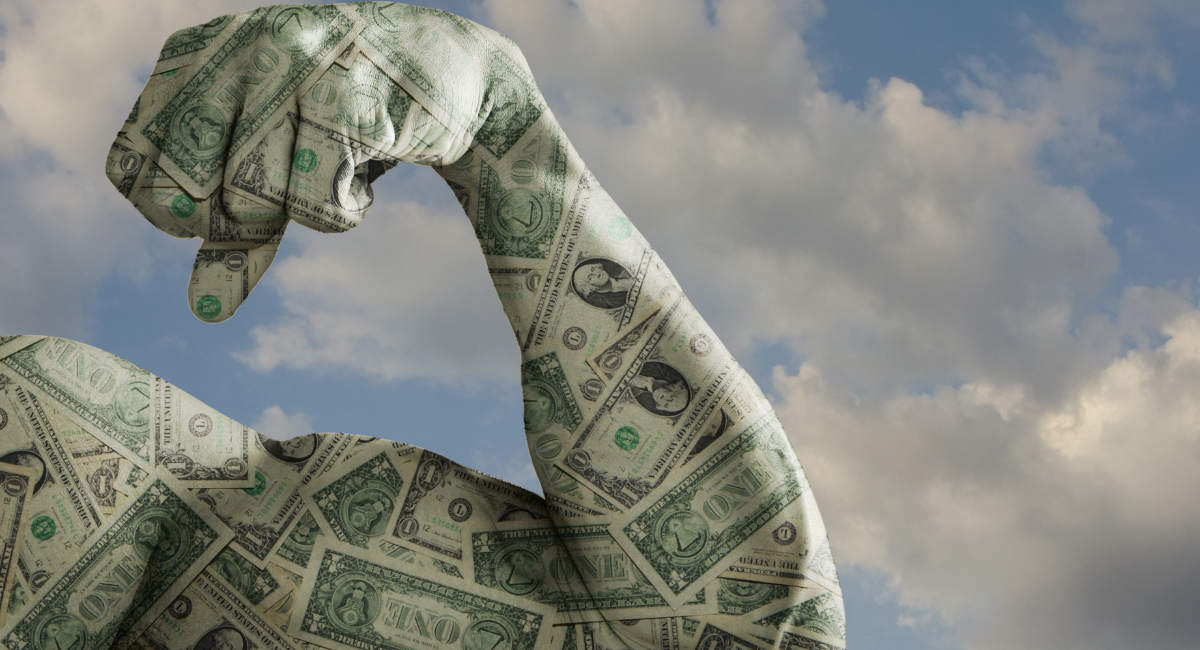 News surrounding a Planned Parenthood merger between an affiliate in Indiana and Kentucky and one that operates facilities in Alaska, Hawaii, Idaho, and Washington state reveals that the move was driven not by a desire for better patient care but by a desire for increased power and profits.

Planned Parenthood claimed the merger “strengthens the organization’s ability to provide quality sexual and reproductive health care” — but upon closer examination, the organization’s financial reports and client numbers paint a much different picture. 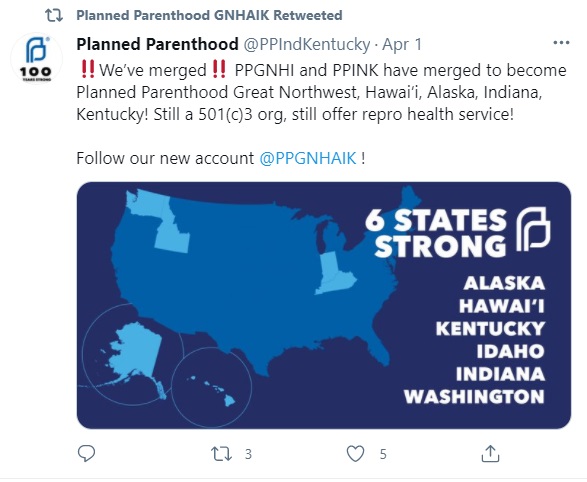 PPINK clients have plummeted year after year, causing affiliate to operate in the red

The data reveals that the two-state affiliate PPINK served fewer patients than its Indiana centers alone reported for 2013. Even more concerning is the fact that year after year, this affiliate was actually operating in the red — in other words, it was not bringing in any excess revenue. 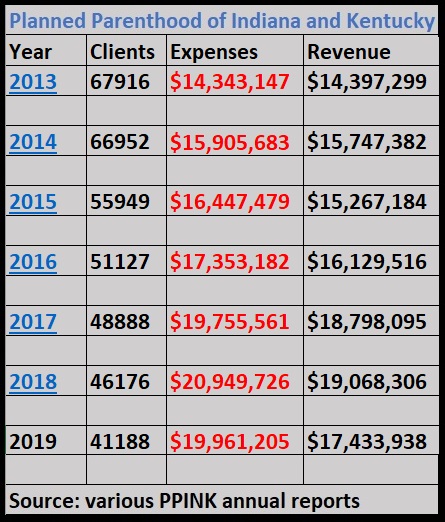 While clients at PPGNHI increased slightly over several years, the numbers appear to be ticking downward of late. In addition, PPGNHI’s revenue vs. expenses has been almost level for years, and in some instances, this affiliate also appeared to be operating in the red. The precise reasons for the losses are unclear, but a closer look reveals that in 2015 —when cash flow was in the red by $1.2 million — PPGNHI’s 2015 990 recorded that the same amount was spent on marketing. 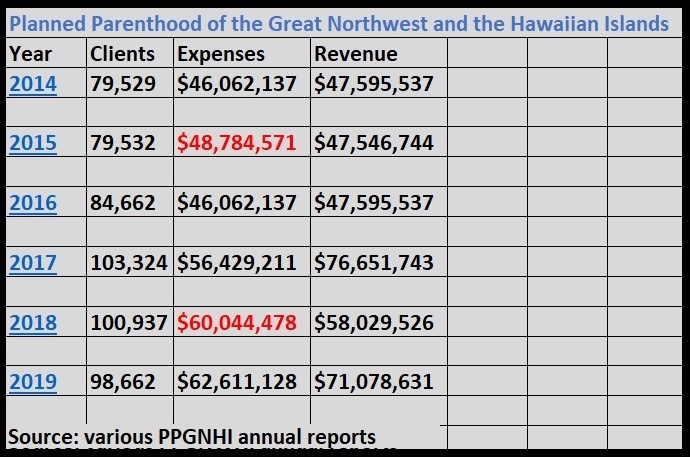 In 2018, when revenue again came in lower than expenses by more than $2 million, PPGNHI’s 2018 990 showed the affiliate had spent more than $2.8 million on building construction in Hawaii — likely its telemedicine abortion hub.

In 2019, Planned Parenthood’s strategy to expand abortion included “investing in a Regional Access Network” to expand where the abortion organization offered telemedicine. That same year, PPGNHI announced a national telemedicine hub opening in Honolulu, which was to “serve as a hub for patients who need to travel from other islands, as well as a home for our digital and telemedicine services across the country.”

A question arises in all of this: how likely is it that abortion pills ordered from Planned Parenthood’s Honolulu telemedicine hub or other pro-abortion states for clients in Kentucky or Indiana could then be billed to taxpayers in Alaska, Hawaii, and Washington state (which all fund abortions for low-income women, according to NARAL Pro-Choice America)? 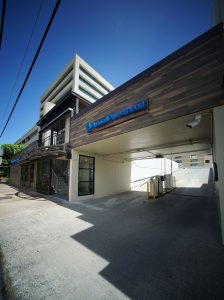 Closures in Washington state blamed on low Medicaid reimbursements. But is this true?

There has been a recent slate of Planned Parenthood facility closures in Washington state, which are part of the PPGNHAIK merger. In March of 2021, Planned Parenthood centers reportedly closed in Seattle, Shelton, and Kent.  A report by the Kitsap Sun also suggested that as many as six additional facilities were also at risk of closing. 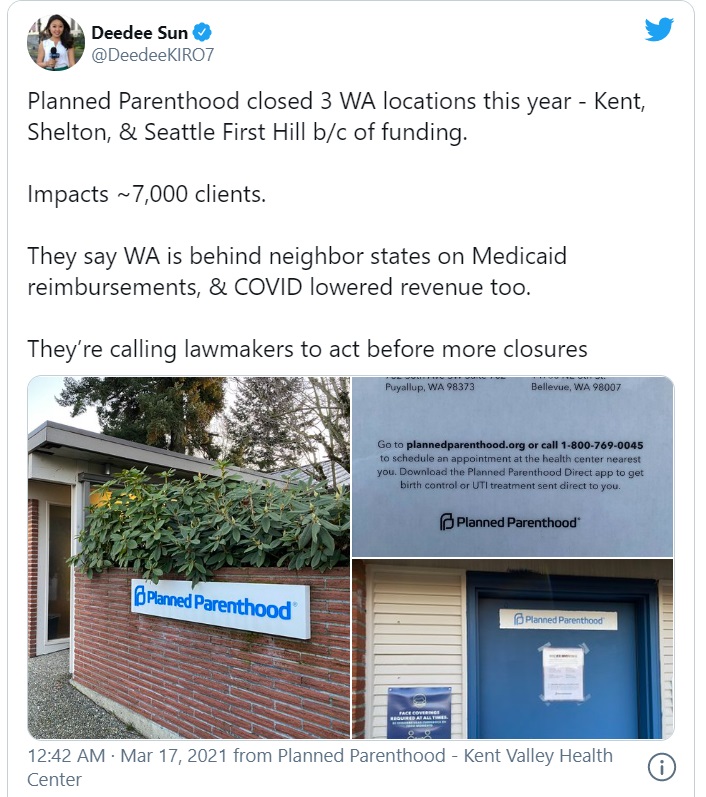 The reason Planned Parenthood gave for the closures was not its $2.8 million building project. Instead, Planned Parenthood claimed they were due to Washington state’s low Medicaid reimbursement rates and the impact of the COVID-19 pandemic.

While Planned Parenthood regularly blames its shortfalls on a lack of taxpayer funding (even though nationally, taxpayer dollars to the abortion behemoth have been consistently increasing for years) a 2017 op-ed written by former Iowa Planned Parenthood manager Sue Thayer noted, “Planned Parenthood advertises that services and supplies are free, but when Medicaid-eligible women are served, it is expected they donate 50% of the total cost for the visit….”

One admitted goal of the merger: Fighting abortion restrictions in pro-life states

The merger between facilities in pro-life states like Indiana and Kentucky with those in more pro-abortion states like Washington is puzzling. After all, these states are worlds apart not only geographically but ideologically.

A statement from PPGNHAIK board member Michael Carter and and PPGNHAIK CEO Christine Charbonneau may shed some insight. They indicated that Planned Parenthood is looking to centralize operations to combat abortion restrictions passed in pro-life states. The word “centralize” from Planned Parenthood generally means cutting expenses and increasing revenue.

“Here in Indiana, we are ranked second in the nation for the number of abortion restrictions, and I know we have the strength and the power to fight back against these attacks, while preparing for our future,” Carter stated in the release.

“This geographically diverse merger brings value to our patients and new opportunities to our employees because we can centralize functions in our health centers, build and collaborate in our advocacy work…” Charbonneau added.

PPGNHAIK’s Charbonneau told APN News that the newly-merged entity will have a combined annual budget of $80-90 million and will serve more than 164,000 patients annually at 45 facilities across six states, with 16 of those facilities in Indiana and two in Kentucky.

A report published by the Courier Journal called the merger an act of joining forces “[t]o better fend off attacks from conservative lawmakers and governors.”

According to their report, Charbonneau claimed the merger was part of a “conscious effort of affiliates in blue states” to help Planned Parenthood facilities in states that are “less hospitable” to abortion rights. She expected the new alliance “will have more money and legal muscle to fight.”

“We felt it was important to help the mission of Planned Parenthood everywhere, not just in our neighborhood,” she told APN. “We have a big bank balance.”