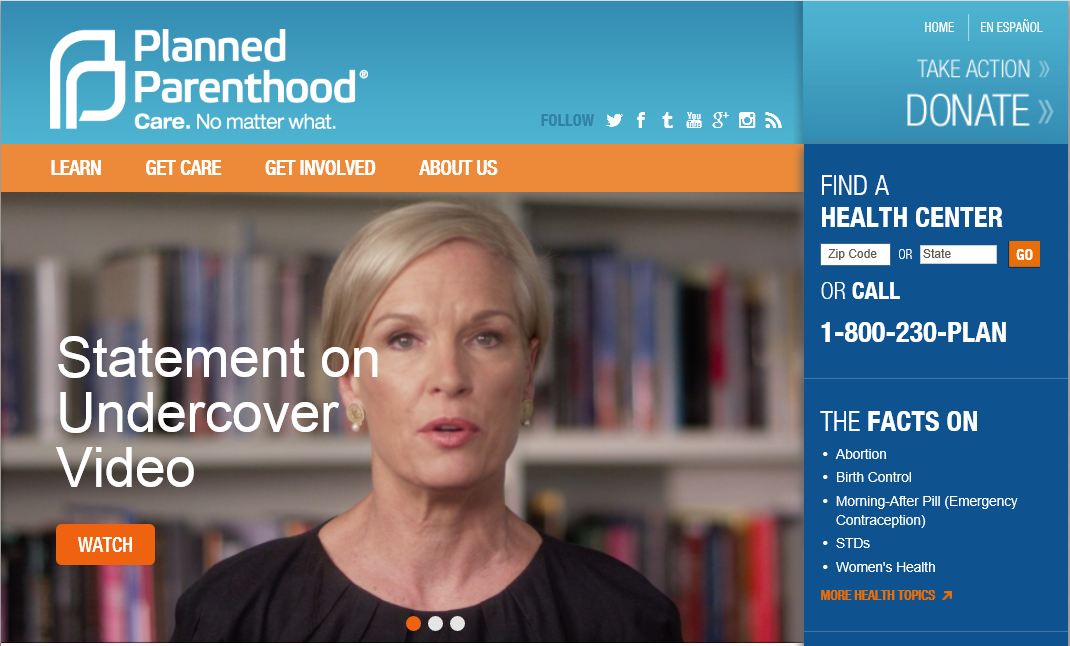 In response to the first video, Planned Parenthood’s Vice President of Communications, Eric Ferrero, claimed that women actually donate their fetal tissue, and that it is done ethically and legally and with full consent. President and CEO, Cecile Richards, apologized for the tone, but ultimately defended her organization as compassionate, smearing pro-lifers.

Once again, a group of anti-abortion activists has attacked Planned Parenthood doctors, nurses, and patients with false accusations. And once again, its political allies are seizing on these accusations as an excuse to push the same dangerous agenda — ban abortion, shut down health centers and cut women off from care.

No where in this message does Planned Parenthood address any claims from the video. And even if abortion were to be banned and Planned Parenthood defunded, their so-called “health centers” are not the only places people can go for care, and would certainly not result in women – pregnant or otherwise – being “cut… off from care.”

Some of the claims are particularly notable, however. Without support to back up such claims, Planned Parenthood calls out accusations as “blatantly false” and calls the pro-life view a “narrow ideology”:

We know they’ll use any accusation, no matter how blatantly false, to force their narrow ideology on women nationwide. They’ll ignore the objective voices in media and the medical research community that have demonstrated how phony this latest attack on Planned Parenthood is.

It is worth mentioning that Planned Parenthood ignores research and that one thing in common the two videos have with each other – changing the abortion method – is spoken against in the medical community.

In the first video (unedited version and transcript available), Dr. Deborah Nucatola acknowledges that “You should always do the procedure the same, and that’s what the providers try to do.” But later, she mentions she will attempt to get more intact specimens and may even modify the procedure:

For example, what I’m dealing with now, if I know what they’re looking for, I’ll just keep it in the back of my mind, and try to at least keep that part intact….

Buyer: So they can convert to breech, for example, at the start of the—”

PP: Exactly, exactly. Under ultrasound guidance, they can just change the presentation.

If our usual technique is suction, at 10 to 12 weeks, and we switch to using an IPAS [manual vacuum aspirator] or something with less suction, or to increase the odds that it will come out as an intact specimen, then we’re kind of violating the protocol that says to the patient ‘we’re not doing anything different in our care of you.’

Now to me, that’s kind of a specious little argument and I wouldn’t object to talking to asking Ian, who’s our surgeon who does the cases, to use an IPAS [manual vacuum aspirator] at that gestational age, in order to increase the odds that he’s going to get an intact specimen.

When asked by the buyer how she feels about that, Gatter responds “I don’t think the patients would care one iota. So yeah, I’m not making a fuss about that.” She also refers to the method described above as a “less crunchy technique to get more whole specimens.”

The conclusion of Planned Parenthood’s response reeks of desperation:

But they can’t ignore us. We’ve seen this all before all right. We’ve seen it, we’ve fought it, and we’ve won. And we won’t stop fighting this time, because more than anything, we care about women — and we need your support.

We care about the brave, compassionate women who have chosen to donate tissue to the cause of medical research. We care about the doctors and nurses who have dedicated their lives to serving women in their communities. And most of all, we care about the women who will be cut off from basic, lifesaving care if these anti-abortion activists get their way and manage to shut down Planned Parenthood health centers.

Planned Parenthood “has won” only because they have the support of the most pro-abortion presidential administration in our nation’s history and receive half a billion dollars from taxpayers annually.

The organization only seems to acknowledge women as “brave, compassionate women” in prepared statements when it’s convenient and to their benefit.

How Planned Parenthood treats women and allows buyers to treat them when it comes to their counseling and consent suggests not only that the organization is lying about consent, ethics and legality, but about their concern and care for women.

Sorry Planned Parenthood, but we’re not fooled either.