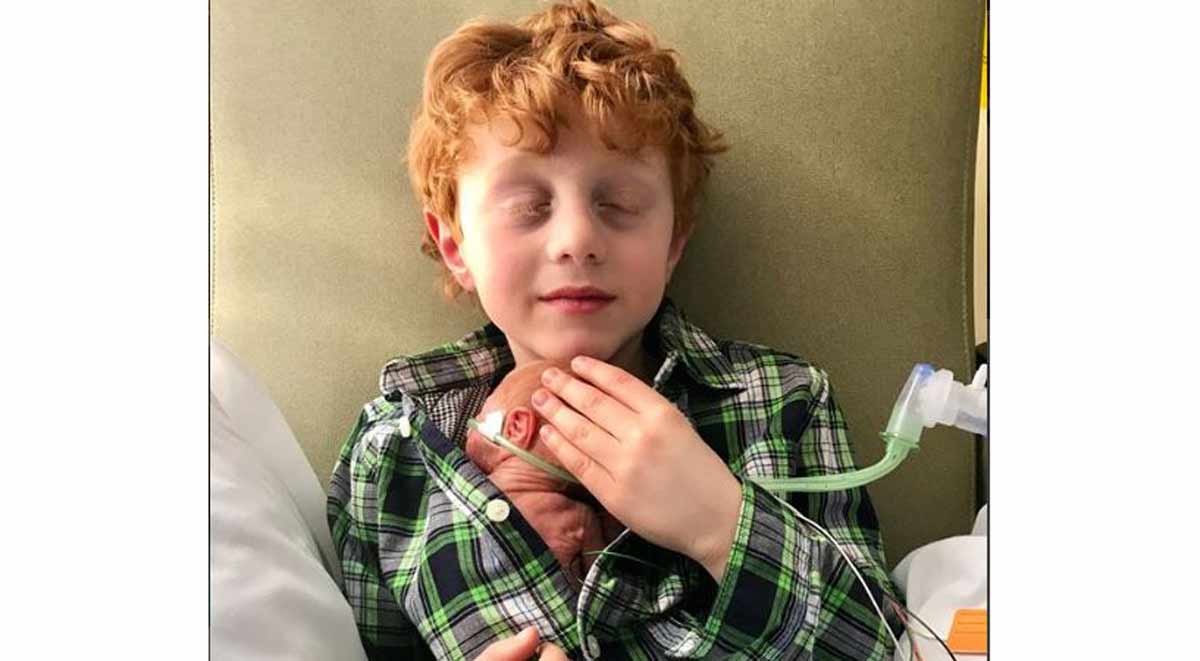 Six-year-old Mickey had been begging his parents for a baby brother since he learned to say the words. His mother, Jessica Marotta, and his father, wanted to desperately fulfill that wish for him, but after struggling to conceive, undergoing surgery to remove fibroids from her uterus, and miscarrying a baby boy at eleven weeks due to Trisomy 13, Marotta wondered if it would ever be possible. Then finally, after they gave away all of their baby gear and decided not to pressure themselves any longer, the couple learned they were having another baby. They had no idea, however, that they would soon be offered the “choice” of abortion by their doctors.

“We were excited but cautious,” Marotta wrote in an essay for Love What Matters. “The next 7 weeks were hard. I found myself bleeding every week and each time my heart would drop and our excitement would turn to sadness.”

READ: Mom of quintuplets refused abortion: ‘Everything I did, I did for them’

Despite the bleeding, at each appointment the baby’s heartbeat was strong. By the end of October 2017, they learned they were expecting a boy. After that, the pregnancy was normal up until about 18 weeks, when doctors performed and ultrasound and learned the baby was small for his age. Three weeks later during another ultrasound to recheck his growth, the doctor was still concerned and the couple was sent to Maternal Fetal Medicine at Beth Israel in Boston.

“We were so scared,” wrote Marotta. “[…] The doctor shared with us a grim diagnosis, severe Intrauterine Growth Restriction (IUGR) and there was a high risk of uterine demise (their words, not ours).”

The couple was told they could choose abortion, but they refused.

“We explained to the doctor that we were going to fight for our baby,” wrote Marotta.

And so that’s exactly what they did. The doctor and parents prepared a plan. Ultrasound every week to measure the baby’s growth with the goal of making it to 28 weeks gestation and a weight of one pound. After the absence of cord blood flow was discovered, those ultrasounds increased to twice weekly. Then, in February, Marotta was admitted to the hospital to await the arrival of her baby boy. She received a steroid shot to help the baby’s lungs develop, and was monitored three times a day. Her husband and Mikey would visit her, and Mikey even had his own cubby of toys and snacks in the hospital room.

The journey to his birth continued to be rough, with multiple scares that he was going to be born too soon. Then at 30 weeks and six days, the doctor knew it was time.

“The doctor told us, ‘we are going to have a baby today,’ and explained that if we waited any longer we would risk a stillborn,” she wrote.

Jake Eric was born via emergency C-section after his heart rate began to rapidly fall when his mother received anesthesia. He weighed one pound, 12 ounces, and was just one foot long. The first time Mikey saw his baby brother, “he beamed” and shouted, “[H]e has red hair just like me,” said Marotta.

Jake would need to stay in the Neonatal Intensive Care Unit for an indefinite amount of time, which was hard on the family. There were several occasions when the alarms would sound that something was wrong, and one incident in which he was struggling to breathe more than usual. He received a blood transfusion to help him produce more oxygen, and used a feeding tube. Marotta only got to hold him for short amounts of time each day.

“I lived for the couple of hours a day I got to hold him skin to skin,” she said. “I would sit in the recliner by his isolette anxiously awaiting the nurse and respiratory therapist to take him out and adjust all his tubes. It was the moment of the day when I felt most calm.”

Mikey wanted to hold Jake, too, and had been unable to — until one happy day, when Marotta decided to ask if Mikey could do skin to skin with Jake. The medical team said yes.

“On March 17, 2018, Mikey was the first sibling at Beth Israel NICU in Boston to do skin to skin,” said Marotta. “It was amazing and emotional, and I truly believe [it] became the foundation for their brotherly bond.”

After 62 days in the NICU, Jake was finally able to go home with his family. Their mother says their bond is “amazing” and that she and her husband often joke that they “wish Jake looked at us the way he looks at Mikey.” She knows they were destined to be brothers.