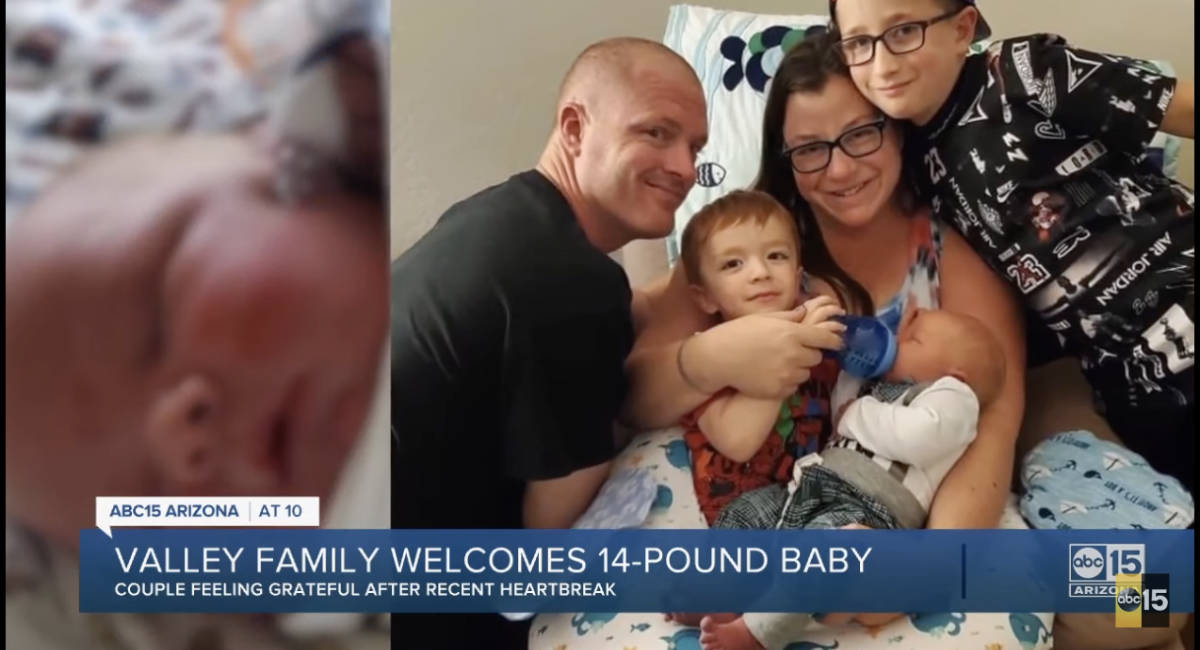 An Arizona mother is celebrating with joy and gratitude after giving birth to a healthy 14-pound baby boy last week. Previously, she and her husband had suffered multiple miscarriages but hadn’t given up hope of having another child.

Cary Patonai told local ABC affiliate KNXV that newborn Finnley is a miracle baby. She and her husband Tim were already parents to two young boys, but they suffered two miscarriages after their now-two-year-old son was born — and 17 miscarriages prior to his birth. Their new baby Finnley is a long-awaited blessing to the entire family.

“Two of those miscarriages were sets of twins so it was very difficult,” explained Cary. While a stigma about miscarriages still exists, and parents are expected to quickly move on and try again, the pain and trauma of miscarriages — especially multiple miscarriages — is devastating to couples. But despite their pain and heartbreak, Cary and Tim did not give up on adding another baby to their family. Finnley is the miracle they had been waiting for.

And a big miracle he is! Cary explained that when he was born, the hospital staff were shocked by Finnley’s size. She recalled, “They were like […] I can’t believe he’s so big, they couldn’t wait to get him on the scale.” Finnley weighed about double what the average newborn weighs, and was also nearly two feet long.

“They got him on the scale like 14.1, I’ve never seen it that big, the doctor and one of the sweetest nurses there they were all taking selfies with us, they asked permission of course, but they were just so pumped,” said Cary.

The couple’s other sons had been born smaller — at 11.1 and 8.2 pounds — so the parents were unprepared for Finnley’s size. The outfit they planned to bring him home in was sized zero to three months — far too small. Instead, he went home in a onesie sized for a six to nine-month-old baby.

Now home with his family, Finnley is doing well. “Finnley just goes along with everything. He’s a very well behaved baby,” said Cary.