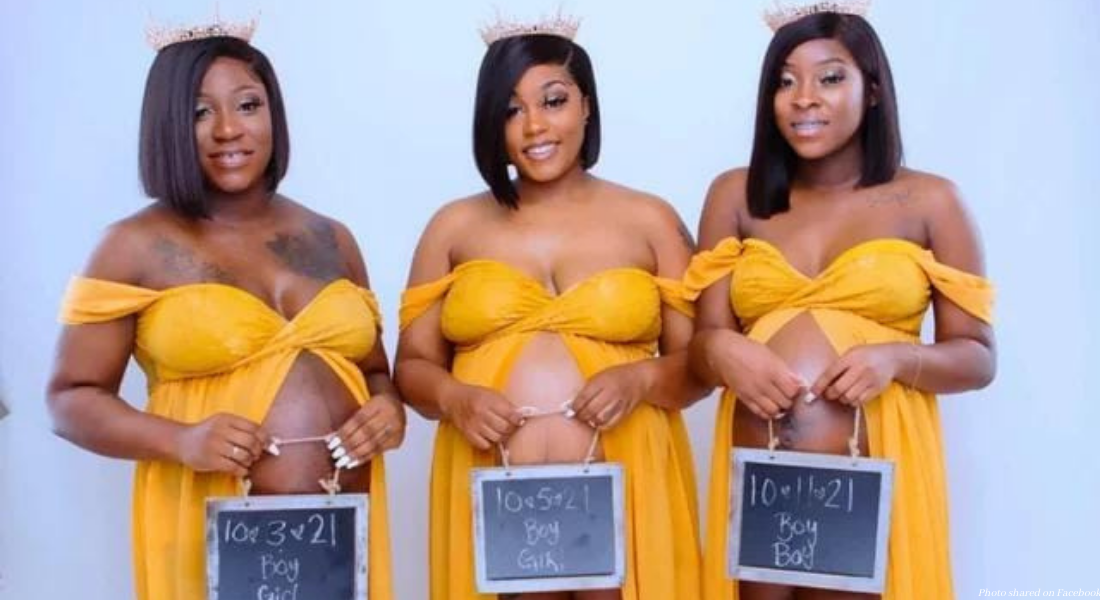 A trio of cousins who all suffered miscarriages will all be welcoming twins in October. Melody Stubbs, Courtney Harper, and Janeshia Wilson shared the story of their miracle pregnancies with WLBT, and it has quickly gone viral.

All three women said they didn’t plan to get pregnant at the same time, much less to all conceive twins. “I think Neshia posted first, and I saw her post, and I posted mine about a week or two later,” Harper said. “She called me and said, ‘You’re pregnant? You’re having twins?!’”

They realized not long after that Stubbs was pregnant with twins as well, and made a special group chat just for the three of them. “We talk about things we’re experiencing during pregnancy; we go to women’s health events together,” Wilson said, with Harper adding that they even have the same doctor. Stubbs is expecting her twins first, on October 3rd, with Harper’s twins due next on October 5th. Rounding out the group is Wilson, due on October 11th.

“It’s kinda mind-blowing,” Harper said. “The first question that people ask is whether twins run in our family, but no one close to us has twins. We kinda just started a generation of twins out of nowhere.”

While the connection of twins between the three is surprising enough, they all also have something less happy in common: they all suffered miscarriages in previous pregnancies. “When I first got pregnant, I was scared,” Stubbs said, with Wilson adding, “I have good days and bad days, emotionally; it’s a rollercoaster ride.”

A recent study in The Lancet, a peer-reviewed medical journal, found that Black women have a miscarriage risk 43% higher than that of white women. “It’s something that hasn’t been highlighted before and something that we need to understand more about,” Siobhan Quenby, a professor of obstetrics at the University of Warwick and co-author of the study, told CBS News. “All we can suggest is perhaps they have more of these risk factors,” Quenby said. “We also think that maybe there’s some social factors in certain societies.”

The study also found that miscarriage has a profoundly negative effect on women, with 20% of women suffering from post-traumatic stress disorder after a miscarriage, in addition to anxiety, depression, and suicide among other women. “Miscarriage really matters,” Quenby said. “It isn’t something that shouldn’t be talked about or should be hidden away by society or stigmatized. Every miscarriage is an important event in someone’s health status.”

But the fact that the three cousins are able to experience this journey together helps them to feel less scared, with Harper explaining, “I’m not afraid anymore because I’m not alone.”