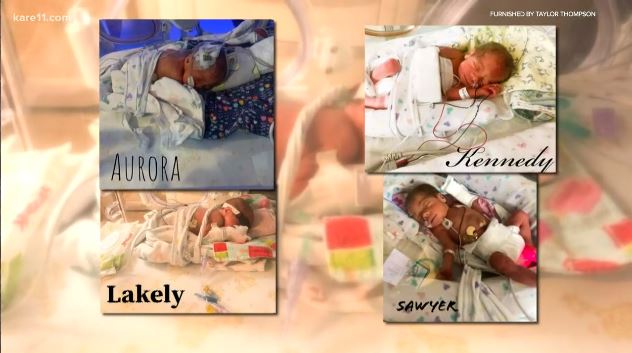 At their eight-week ultrasound, couple Taylor Becher and Lance Thompson learned they were expecting not just one baby but four. The identical quadruplet baby girls were born on March 11, 2020 — the smallest weighting two pounds, 10 ounces and the largest three pounds, three ounces.

“It started off with twins,” Becher told KGUN9. “Then all of a sudden my OB was like, ‘No. There’s three!” And then Thompson joked and asked, “Are you sure there’s not another one in there?” Sure enough, there was. Four little hearts were pumping. The estimated odds of conceiving four identical children naturally are one in 15 million.

“I was scared of having so many babies inside of me,” Becher said of her reaction when she heard the news. She knew it would be a high-risk pregnancy, but said Thompson was good at keeping her calm.

“There were times where I would Google and stress myself out, but Lance would talk me down,” she told Today Parents. “He would say, ‘Everything is going to work out.'”

Thankfully, the pregnancy and delivery had no major complications. Babies Sayer, Kennedy, Lakely, and Aurora were delivered via C-section at 31 weeks and six days. Lakely was the small one and had been “growth restricted” during the entire pregnancy. She was strong though and ended up being the only one of the girls who didn’t need any assistance with breathing.

The identical quadruplets have been staying in the neonatal intensive care unit and will continue to do so for a bit longer as they work hard to gain weight and get stronger. They are all, however, breathing on their own. The goal is to get them home to meet their older brother Linden in April.