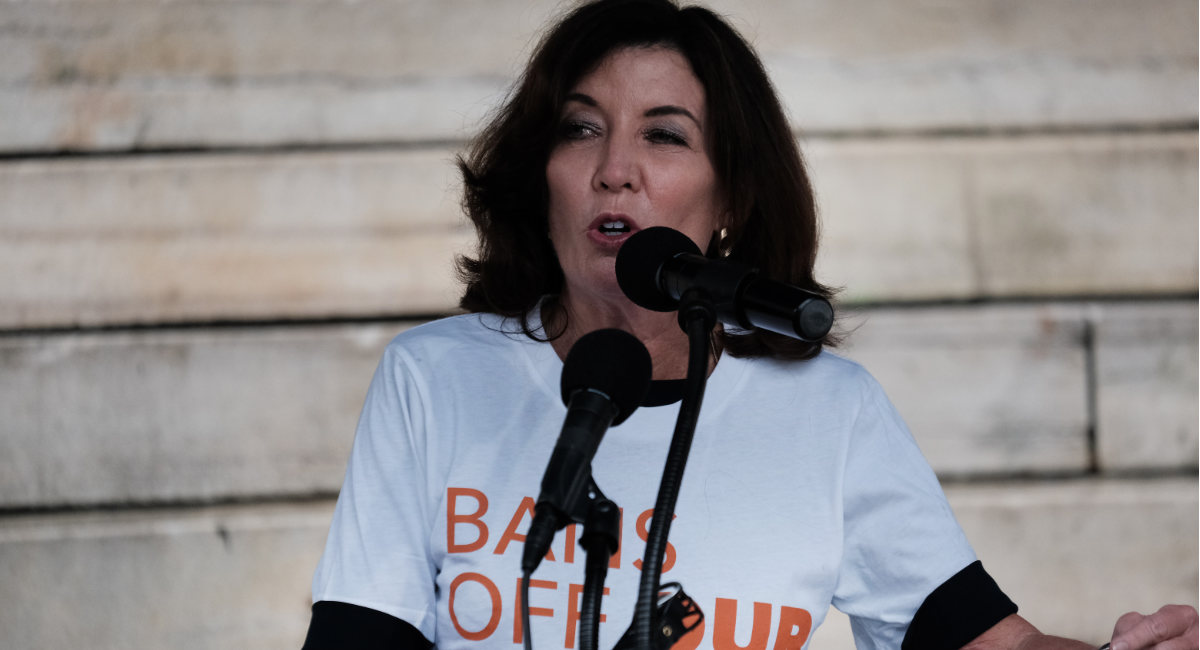 In the wake of the Texas Heartbeat Law, New York Governor Kathy Hochul — who replaced Governor Andrew Cuomo after he resigned due to scandal — is vowing to protect abortion at all costs within the state, which already has some of the most pro-abortion laws in the nation.

Hochul spoke at a press conference in Central Park before the Women’s Rights Pioneers Monument, where she shared her reaction to the law in Texas protecting preborn babies with detectable heartbeats and which polling has found that a plurality of Americans support. The law is unique in that it is enforced by private citizens, who can file suit against abortionists caught breaking the law and against others who aid and abet an abortion (except for the preborn child’s mother). Myths have spread like wildfire about the law, with one of the most nefarious being that a rapist could sue his victim. (This, of course, is completely false, according to the law itself.)

Hochul delivered the speech in front of a monument to three women — Sojourner Truth, Susan B. Anthony, and Elizabeth Cady Stanton — who openly abhorred abortion or fought for the rights of women to remain with their children. It’s a complete hijacking of what these women stood for to exploit their legacy for a pro-abortion agenda.

Gesturing to those “brave women” behind her, Hochul said she plans to launch a public information campaign to educate New Yorkers about abortion, and called the Texas law “grotesquely unfair.” She also sent a fear-mongering message that women are due to lose their “rights” at any moment — painting the ability to kill preborn children as a “sense of security” for women.

“Women all across this nation have had to confront the prospect that rights we just took for granted our entire lives, rights that my grandmother had to fight for, rights that were just starting when my mother was a young woman, rights that were always there when I became a young adult, and rights that I assumed would be there for my now 30-something-year-old daughter… all of a sudden that sense of security we once had in our nation has been ripped apart,” she began.

She said that when things are the darkest before the dawn, New Yorkers come together — and in this case, will be doing so by promoting and defending abortion.

“Think about what they did!” she continued. “I guarantee I did not know I was pregnant with my first child at six weeks… so you’re denied the choice that should be yours as a woman.”

The problem with that argument is that abortion isn’t a choice that affects solely a woman and her own body. It’s a fact that the abortion industry and its complicit partners in the media try very hard to cover up, but the science is still clear that from the moment of fertilization a human being is created, and three weeks later, that human being has a heartbeat that will be detected within one to two more weeks. It may be an uncomfortable reality to confront, considering it undermines the entire institution of abortion, but it doesn’t make it any less real.

Hochul went on to complain that other lawmakers are passing pro-life laws, and said that New York women would be “warriors” in this “battle” to help women across the country get abortions. Hochul remained silent on whether the state would be willing to help women who want to keep their children.

Hochul went so far as to use the Statue of Liberty as an illustration of “safe harbor” for women seeking abortions.

“That [statue] is a strong, powerful woman with her hand up saying if you’ve been oppressed anywhere in this world, you come to our harbor,” she said. “This is the safe harbor for people suffering from oppression. My friends, that oppression, in my judgment, is going on right now in the state of Texas, and our harbor is open for people to come here and understand that we will be there to take care of them and protect them.”

The poem on the Statue of Liberty implores the world to send “your tired, your poor, your huddled masses yearning to breathe free, the wretched refuse of your teeming shore.” She speaks of welcoming and protecting those who are the least wanted in the world — and there is no group as maligned and attacked and oppressed as preborn human beings denied their right to life, especially in pro-abortion states like New York.

Hocul said she is directing the state Department of Health to create a public information campaign, available online, informing everyone of their ‘right’ to abortion, including those from outside of New York. “If we’re going to be a haven for people from elsewhere, we need to make sure that our health care providers are also equipped with the guidance they need,” she said. “I’m also directing the Department of Health to take immediate action to develop and distribute modern and comprehensive provider guidance on their right to abortion care.”

New York is already a haven for abortion, having created an abortion access fund to help low-income women pay for abortions, and having a mandate requiring all groups — even religious groups — to pay for abortion coverage in their insurance plans. Abortion is legal in the state until birth for reasons of ‘health’ including financial or familial health, and New York comprises 12% of all abortions committed in the country. New York doesn’t need to do anything to make itself a haven for abortion. It already is.